This is the last post for our trip in the shipped Hymer and is copied from my last diary entry.
IT IS LONG , SORRY ! IT WAS A LONG TRIP.

LPG approx the same as deisel but you can not fill yourself at a gas (petrol) station except in one or two states.Plenty of companies to fill you up including the many U haul depots.A adapter required for the American large thread screw on filler.Purchased ours from Gaslow.

Purchase at the start of a yearly pass at 80 Dollars for National Parks have saved us lots.
It covers vehicle and occupants , average entrance is 20/30 Unfortunately the government shutdown has prevented it's use at many sights at the end of our trip.

Joined Good Sam at first opportunity in one of their many affiliated Camping World Supercentre stores.This cost 27 dollars which gets you discounts on affiliated campsites and a massive book at 8 dollars for all USA campsites.BUT our reason was it then allowed us to join their countrywide breakdown service for any size vehicle at 80 Dollars.You can also boondock (wild camp) on their carparks and use their dump stations.Not all though so check first.

We avoid campsites,too expensive.Very easy to boondock (wild camp).Average cost about 40 dollars but often a lot more.State and National parks are better at about 20 dollars but no electricity or frills and many of them
States have different rules concerning wild camping but the more western have best opportunities .Sometimes it just makes sense to use a site.
We have paid 8.00 up to 107.00 per night.That was a NP site and New Orleans city centre site.

Launderettes are common and cheap .Approx
2 dollars (£1.60 ) per washing machine and same for tumble lasting 45 minutes.

We dispose of grey and black often in the disposal points at state parks, gas stations,rest area's and Camping World.These allow for black ,otherwise many free standing plastic cubicles to dispose black as European vans have simple cassette storage but American have some type of pump out system.Water often uploaded from gas stations when filling diesel.

Our favourite foodstuffs often only in independent supermarkets at a cost.

We have bad roads in UK & Europe but in many locations here they take it to a new level.The van had certainly taken a bashing.

You guess how much fuel is required and pay first with a over estimated value.The actual amount used is what comes off your cc statement.

We have to use a 10 litre add blue every 1500 miles which is a extra expense at 15 dollars for this Mercedes 3 litre engine.

Americans very friendly and polite.Drivers pretty good and obey speed limits except in cities you get a few idiots .

Not keen on overtaking on any lane.Accident waiting to happen.We have seen many.

The condition of some vehicles are so bad I assume they don't have yearly checks for road worthiness.

What we used to call Remould Tyres are used on trucks ,explains why the highway is strewn with shredded tyres everywhere.

I like the ability to turn right (equivalent of turn left in UK) on a red light if no oncoming traffic.

You sometimes exit motorways from the fast lane and have to join at the same junction as those who are exiting.

Pick up trucks are ubiquitous and the cars no longer have what I call an American identity to their styling.They all look European ,no doubt to make sales worldwide.Just love their old style fifties cars.

Harley Davidson is king.They do like their Harley's and three wheeler's are also common.

Rv's of all sizes have air conditioning which ,I am told,you can't live without when the heat arrives.
This does of course require campsite electric or generator power.

Plenty of housing appear to be in the form of what we call static caravans as used on holiday parks.
Unfortunately many are in poor condition and for some reason often are cluttered around with old cars and junk.Not many with gardens.

Fed up with the amount of injury lawyers billboards .Seems a specialist lawyer available for any conceivable claim.

Like home,many towns are losing their high street identity to out of town shopping area's some looking like ghost towns.The restaurants are mostly chains and often burgers.

Never seen so many boat showrooms with extensive selection.A huge industry here for their many recreational area's and coastline and not forgetting the millions of fishermen.

DID WE ENJOY THE TRIP -

Great sights and cities we have always heard about now visited .Too much driving but I was mentally prepared for that.
But the thing that made it such a great trip was the people we met.I can not speak highly enough of how kind,helpfull with good manners the American people have been. We will miss being called Sir and Ma'am everywhere.

Ben,who offered change at the counter to avoid us breaking in to a note.

Brit,who met us on a golf course,took our pics for the small town paper and the next day took us up on a trip in his aeroplane.

Durrae,who met us in a launderette who is a author of cookery books and gave us two signed volumes from her RV.

Reception at Royal Palms camp in Florida Keys who requested a cheque deposit and trusted us to turn up as we had no method of paying.That was Xmas week on a fully booked site.

Lynne and Steve who took us in their car from campsite to a restaurant and insisted on paying .

John in a pub night out who invited is out on a hunt the following day.

Tamara and Leanne,who after arriving at Huntington Metro Station on the southern suburbs of Washington to find it is multi storey.Turning in to the next side road we asked two women walking their dogs for info on parking such a large vehicle.
Pondering on the matter one suggested to park outside their house using their residential permit.
Taken aback slightly we hesitated but they insisted.So we parked and put the permit on the window.Next they present us with two travel cards with money loaded to use on the metro !
We of course put money on to them and returned them with extra ten dollars each.
Showing us a short cut to the station through a friend's garden we were on the platform in five minutes.

Sandy and the group at Royal Palms Xmas week who had us joining them at happy hour within one hour of our arrival.Turkey dinner Xmas day,film nights and get togethers.Good laughs.

Having joined a RV group called Texas Boomers to socialise with other campers who made us most welcome.We joined them twice , Halloween and pre Xmas.Fun dressing up ,games and lots ,lots of food.
Thanks especially go to-
Sandy and Randy Martin for our honorary certificate ,now officially Boomers.

Glenn and June Moeller,never a more friendly couple can you meet.

Leon and Charlotte,sorry we did not find the time to visit your lovely home in Houston to meet all your friends.Thanks for the fun Xmas presents.

And all the many other Boomers who made both meets such a good time.

Last night here in a snowstorm before delivery to Baltimore docks at 9 am tomorrow (Monday) .We fly on Wednesday. 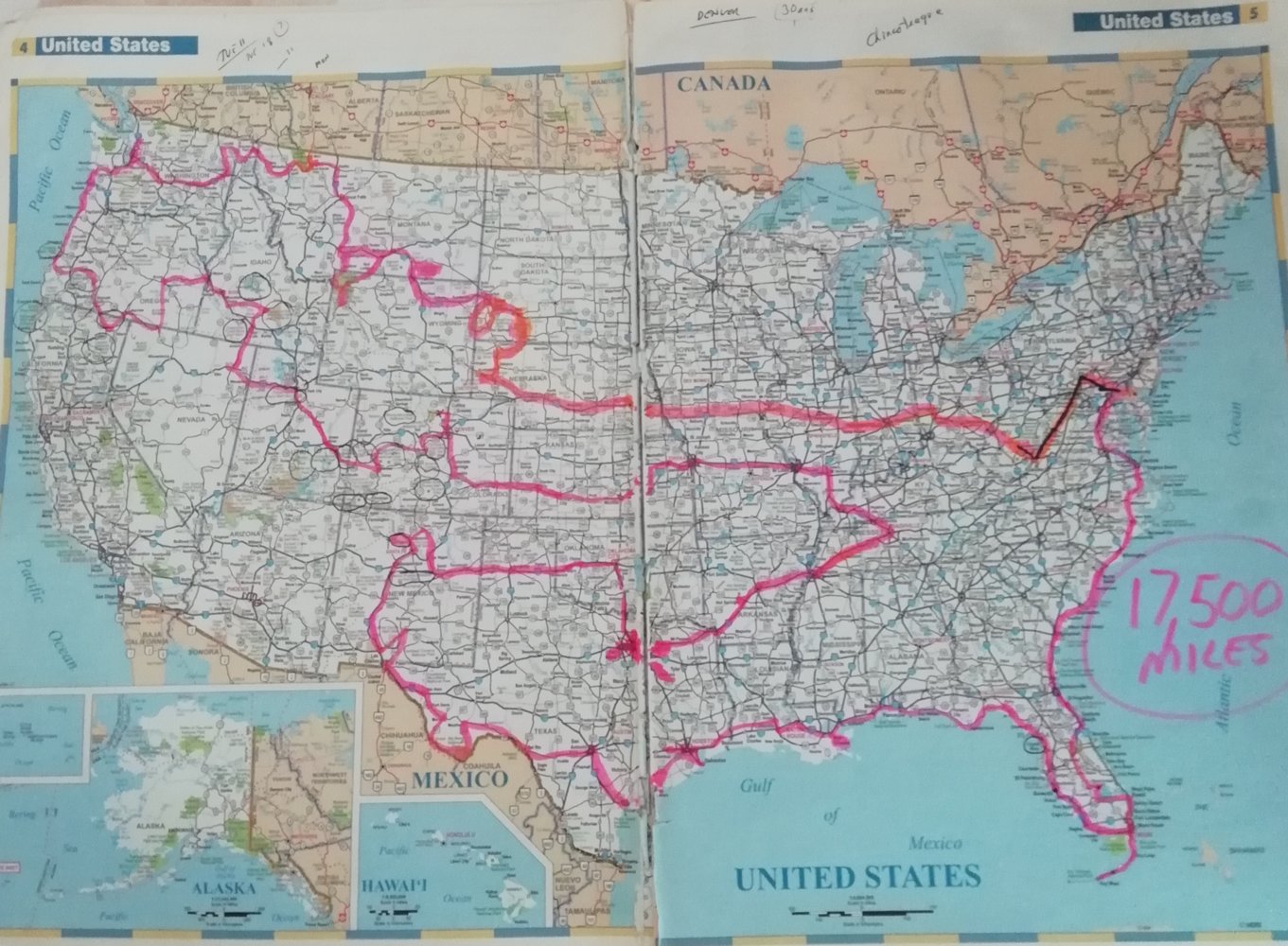 I’ve dipoed in and out of your USA trip thread and thanks for sharing ! It sounds like you’ve had a wonderful experience and met loads of wonderful people!

Thanks for your postings, great read.....same again this summer?

Thanks for posting. Have enjoyed your trip so much.

Sounds similar to our experience, with the exeption that we spread it over 5 years of R-V ownership. We still correspond with American R-Vers. 5 years on!. The USA takes a lot of flak from Europeans over their percieved national attitude. But the PEOPLE are great in the vast majority. They show far more respect to "seniors" (and Veterans) too.!

Your post got me thinking .... long after we’ve forgotten the details of the sights we went to see we remember the human encounters on our travels.
Sounds like a fabulous trip ... thanks for sharing!

Thanks for posting, really enjoyed reading about your trip.

Your Hymer has done a really fantastic job of supporting your trip in style.

What a great adventure.

Thanks for sharing in so much detail. I hope you enjoyed it as much as your posts suggest. Something we might contemplate for the future and all the information provided is very helpful in that regard.

What a great trip thanks for the thread on it, and a nice summery.

Was it your van on the cover of the Hymer Club Newsletter?

Been a great trip to experience from my desk looking forwards to the next one ,london to bejing perhaps?

Our trip to the US was also 17,500 miles . We went for four months but it took us a month to find the right travelling outfit. Drove up to Alaska from Texas and also fitted in the whole of Route 66. Fabulous trip.

Our motto is “its not about the journey, it’s about the people you meet along the way”, that seems the case with your trip. It’s been a great read.
Tx.

Lenny HB said:
What a great trip thanks for the thread on it, and a nice summery.

Was it your van on the cover of the Hymer Club Newsletter?
Click to expand...

Great experience and reporting - thank you

Really appreciate the story
Living close to some large USAF bases we have often socialised with yanks, and found the same as your selves
Very friendly, generous and polite folk

That is absolutely crazy, insane, amazing.

But you were quite cunning in leaving enough for you to go back later this year. 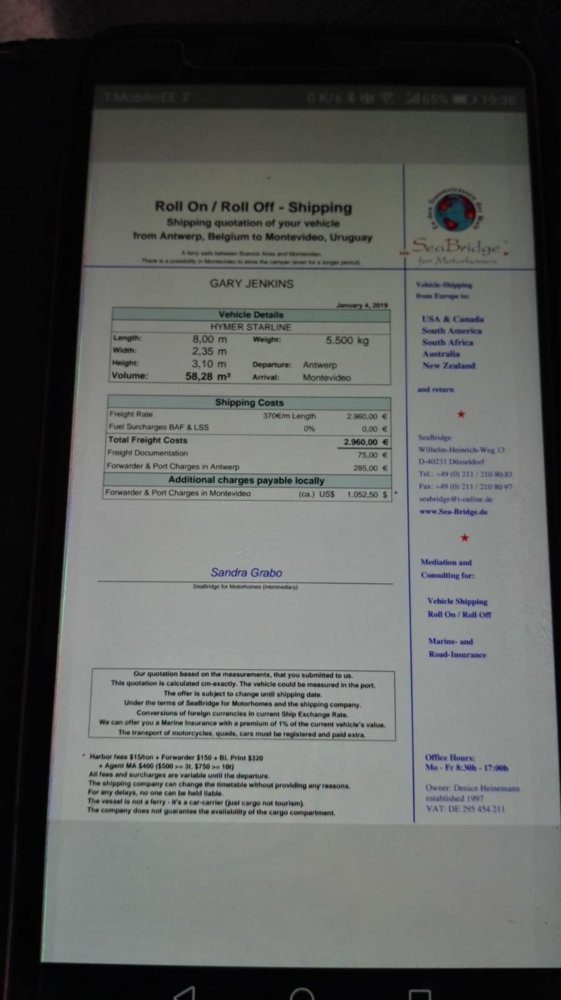 Thank you for your inquiry regarding a camper shipment to South America, Montevideo (Uruguay).

There is NO direct departure from UK (only with a transshipment). So we offer only a shipment to Uruguay from Antwerp, Belgium.

Attached you find a current quotation.

The vessels sail 2-3 times per month, and arrive 4 weeks later at the port of destination.

The schedule is available about 3 months before departure:

ETS is the departure & ETA is the arrival

(Please keep in mind that the schedule often changes to a later departure, but we can change the freight booking for free.)


If you get down there there's only one course: Pan American Highway.

Thank you for sharing your journey. I've really enjoyed following you on your travels.

Great post, took me back, you must of received many : I love your accent : they are great people

Exp
Back in the room

Agree great trip, but did you notice it was 2 year old post?

Are you socialising in your Motorhome contrary to Covid rules ?
2 3 4 5 6