My wife enjoys cooking so an oven was an essential fitting. However, when it is being used the metal part of the oven/grill control becomes red hot. The handle on the cutlery drawer above the oven also gets red hot. Neither can be touched without an oven glove and my wife has burnt her hand twice.

A young child would be at serious risk of facial burns if they came into contact with these metal parts.

We have now stopped using the oven (we have a Remuska) and we are going to ask Rapido to replace it or fix it.

Has anyone else encountered this problem?

We have a Rapido and use our oven all the time. It's obviously not the same as yours though, our cutlery drawer is below it.

Its not just the oven that's dangerous, according to another well know Rapido owner the winterisation leaves a lot to be desired .

Snowbird said:
Its not just the oven that's dangerous, according to another well know Rapido owner the winterisation leaves a lot to be desired .
Click to expand...


My 9048 is fine in the winter including snow, ice and heavy rain and wind.
M

I had a Hymer like that, so I put extra fire proof insulation on top of the oven.

I was later told, that to concentrate too much heat in the oven, could cause damage and affect the warranty ????

And there was me thinking that the better the insulation, the more efficient the oven!!!!!

iandsm said:
My 9048 is fine in the winter including snow, ice and heavy rain and wind.
Click to expand...

The oven on ours is fine, use it all the time (2014 9090) I'll report back on the winterisation after the winter

MH
As Executive 50th an

On some of the smev ovens, there is a pull out metal shelf to protect the ceiling.
not a lot of people realise this

We have this on our hobby not always obvious it's there

Theonlysue said:
On some of the smev ovens, there is a pull out metal shelf to protect the ceiling.
not a lot of people realise this
Click to expand...

That's exactly what I was just thinking too - our Smev grill has the slide out heat protection plate to help stuff above it from getting too hot, might be worth googling your make of oven and checking the spec for it.

Its worth bearing in mind that as a continental manufacturer Rapido rarely fit ovens as a standard fitment (at least they didn't once upon a time). Ovens fitted in UK market motorhomes are generally fitted by the supplying dealers and as Rapido didn't consider an oven in the original design it is almost always fitted in a poor position. First port of call is your supplying dealer, assuming you bought it new in UK of course.

Our oven (which has Rapido written on it) does heat the cutlery draw above but not as bad as our previous van which was a Chausson, regarding winterization, ours if fine.

Regarding heating the unit/drawer above/around, this is normal and no different to using our home oven - the cupboards at either side get warm which is why you should never store food in them - check next time you use yours. If you are concerned there's no reason you couldn't add some more insulation so long as you can access the top of the oven safely.

Oven fine in our 966
winterisation the cab area is bloody cold in the winter in our Rapido.
next job diesel heater for the cab area.

I must admit that although An oven was a, must have, on our list when researching what MH to buy, we hardly ever use it., but when we do it's fine.
A question I would ask though is, "when using the oven do you leave the outside vent on or off?"
When we bought our Rapido 7090 the dealer made a point of telling us to leave it off when using it. I presume if you leave it on it would buckle

I will let you know.

(There is no pull out heat shield on the oven, which I believe is a Smev, badged as a Rapido)
OP

Apparently Rapido are bringing out an updated cutlery drawer (without the metal handle) to resolve the problem.

I am embarrassed to say that the technician I was complaining to, reached into the oven and pulled out a metal heat shield. It was in the oven itself so that the door will not close when the grill is on. Hopefully this will stop the metal control knob getting too hot.

I have to say, I pricked up my ears on reading this, our Pilote oven and grill decided to start melting the gas control knobs in the middle of the row between the grill and hob.

This seemed to be caused by the cooling fans somewhere at the back of the grill, when either is on the fans activate to prevent the hob becoming too hot to touch.

I couldn't just bend down to remove anything from either, I had to squat because the blast of red-hot air in my face was too painful.

We searched for a deflector concealed on it ourselves, I thought of that immediately cos I recalled MIL having to have one on her existing fire and cooker when they changed over to natural gas. We mentioned it to Mark who also looked, there isn't one.

We rang Hayes, Hayes spoke to Pilote, Pilote said the only thing it could be was malfunctioning fans. We were not convinced but anyway, they replaced them. We'd have to let them, and try it, to prove it wasn't that.

Guess what? - it was that! Cured. I imagine one of em wasn't working properly if at all thus concentrating all the heat in one place. The blown air is still pretty warm, but at least it's manageable now. 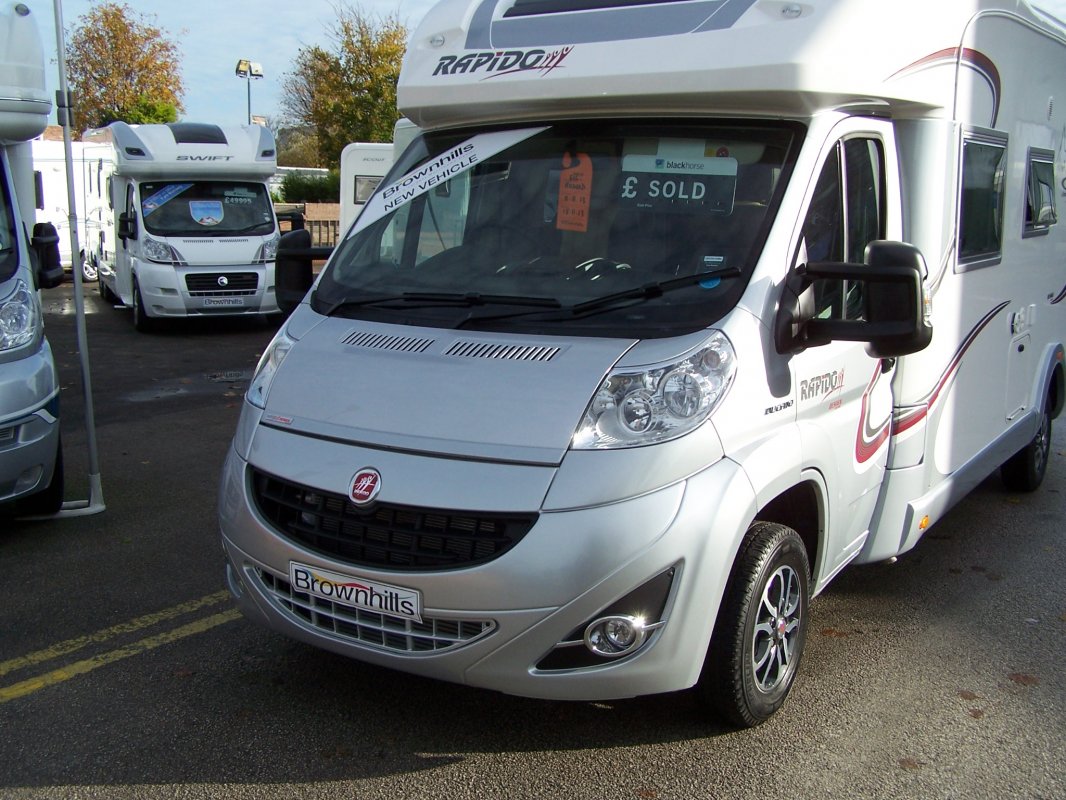 I too have got Rapido 7065ff 2013 Smiley face, and yes the cutlery drawer does get very hot but never hot enough to burn you, good idea though to change handle,
Winterisation no problems we have alde heating which is great and have been away in the coldest weather. we love the motor home

We have a Rapido 891 df with same oven heat issues effecting the cutlery draw.

Another problem we have is with the igniter in the lower oven being out of adjustment,
Having tried many position adjustments, still can't get it to spark, the unit works if shorted out with screwdriver blade.

Looking for info on the actual correct gap dimension between the probe and the jets.

On some ovens we've had there's been a pull out plate already fitted but even with that they can still get hot, to be honest though it's no different to any oven at home as they get hot on the outside too and anything above that would also so whilst I agree it's not ideal I don't think you'll get anywhere at all with Rapido.

My only suggestion is to have a removable plate but you'd still need to keep the kids away from it as the plate would get hot - if you were at home would you let the kids near a hot oven?

we have the same problem with ours when the oven is used the handle above gets hot ,I blame the designer
that would be me then
the pull out sheild is only for the grill but as the grill barely gets hot its hardly needed

Just checked and I have the pull out plate!!! Comes out about 3/4 cm, enough when the grill is on to stop the knobs getting hot. You learn something new everyday

Theonlysue said:
On some of the smev ovens, there is a pull out metal shelf to protect the ceiling.
not a lot of people realise this
Click to expand...

And an additional one when using the grill

Mine has been fine and not even an external vent
http://www.motorhomefun.co.uk/forum/threads/rapido-oven-models.132104/page-3 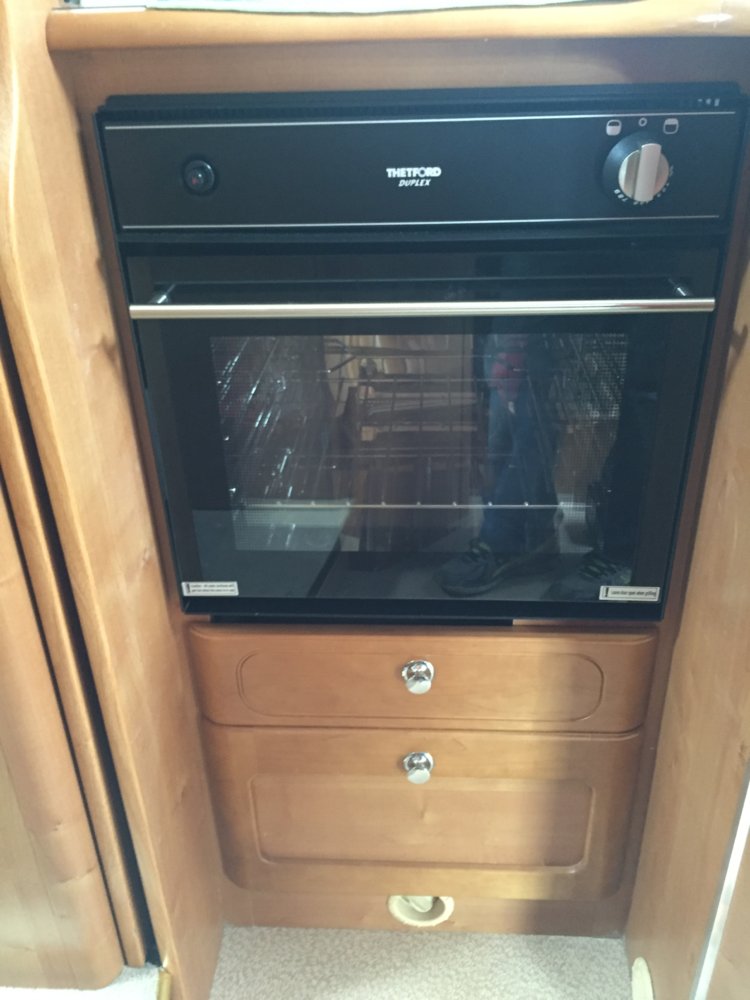 Especially drop down door ones.....twice now I have walked into it. Ok, so alcohol may have had a part to play. I really shouldn't drink and cook at the same time