Let's be careful out there! (1 Viewer)

Family walk away as motorhome overturns
By Jess Bauldry THE ARGUS


A family have described their miraculous escape when their motorhome rolled over on a busy road. HGV driver Robert Cadwallader, 35, from Meadow Road, Worthing, said he feared the worst when the offside tyre blew out on his 1989 Peugeot Talbot Hymer campervan, causing it to career sideways across two lanes before landing on its roof on the A24.

But luckily, he, his partner Stephanie Kent and their three children emerged from the potentially fatal accident on Tuesday afternoon with only bruises.
He said: "It's quite a miracle. We're still in disbelief at what's happened. Relatives have been telling us that someone is looking down on us."

Mr Cadwallader was driving the campervan south from Horsham, returning from Rudgwick Steam Fair, when the accident happened. He said: "I noticed there was an HGV trying to get out so I moved into the right lane to let him out.
"We got past and just as he was saying thanks the rear offside tyre blew. 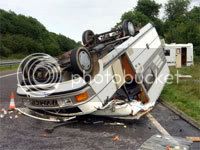 "It was an almighty bang. There was a lot of vibration and it started pulling into the central reservation barrier. "The first thing I thought was we were going to clip the barrier and end up in the oncoming carriageway.

"All of a sudden I lost control. I fishtailed down the road then the vehicle came round on me and the whole vehicle was travelling sideways down two lanes.
As we clipped the kerb the van rolled onto its roof. At the time it was like it was happening in slow motion. Then there was a lot of screaming and panic in the van."

Despite the cab being almost completely crushed, Mr Cadwallader managed to get out and release his youngest daughter Maissie, 10, while a motorcylist helped him release his other two children, Macauley, 11, and Rosie, 16, and dog Scottie.

His partner Stephanie Kent, 37, a fulltime carer, had to remain in the van because she had suspected spinal injuries.

Mr Cadwallader said the motorcyclist climbed into the van's cab to comfort her for the 45- minute wait until she was cut free by Storrington fire and rescue.

The two adults were taken to Worthing's Southlands hospital where Ms Kent was r e l e a s e d within two hours and Mr C a d w a l l a d e r was discharged the next day.

He said: "I went into autopilot when it happened. I did think the worst to begin with when we were upside down in the van and I was just amazed they were all walking. There was no sign of injuries or cuts. The two girls had bruises but that was it. We were very lucky to get out of it."

The family had bought the van in March to make holidays easier for Maissie and Macauley, who both have autism and described it as their "second home".

Mr Cadwallader thanked the emergency services, the motorcyclist and a passing lorry driver for the assistance they gave.

A very lucky escape indeed, I hope they recover fully and it hasn't put them off motorhoming .
I'm not making a judgement here, but it's a timely reminder of how important it is to have the correct tyres, in first class condition, to check tyre pressures before every journey.. and never overload !
OP

You are right Jim. A police officer I know told me a couple of years ago, that a lot of the accidents he attended on motorways involved failing tyres. They are THE most important part of a vehicle and often THE most neglected.

There is a video out there on the net somewhere explaining how to cope with blowouts and bring the vehicle to a safe stop but I have forgotten where it is.

ralph-dot said:
There is a video out there on the net somewhere explaining how to cope with blowouts and bring the vehicle to a safe stop but I have forgotten where it is.

We have had a Double blow-out on our RH side rear on the Coachmen and a RH front blow-out on our Newmar. I know what it feels like. There have been other blow-outs in the past. The worst was back in 1968 when I was a passenger in a VW Beetle traveling on the Motorway in Belgium. We had a RH rear blow-out (where I was sat). The driver panicked and we did a 480 and went in backwards off the road into some bushes. He wouldn't drive again after that and I had to take over. :Mad:

I spotted this in Paris last week. This guy clearly is not into worrying about weight and overhang. A long overhang anyway, coupled with two scooters and two bikes an aircon and a large probably full garage all behind the rear axle. A rear blowout at speed with this baby and he is gonna have to fight hard to keep control. 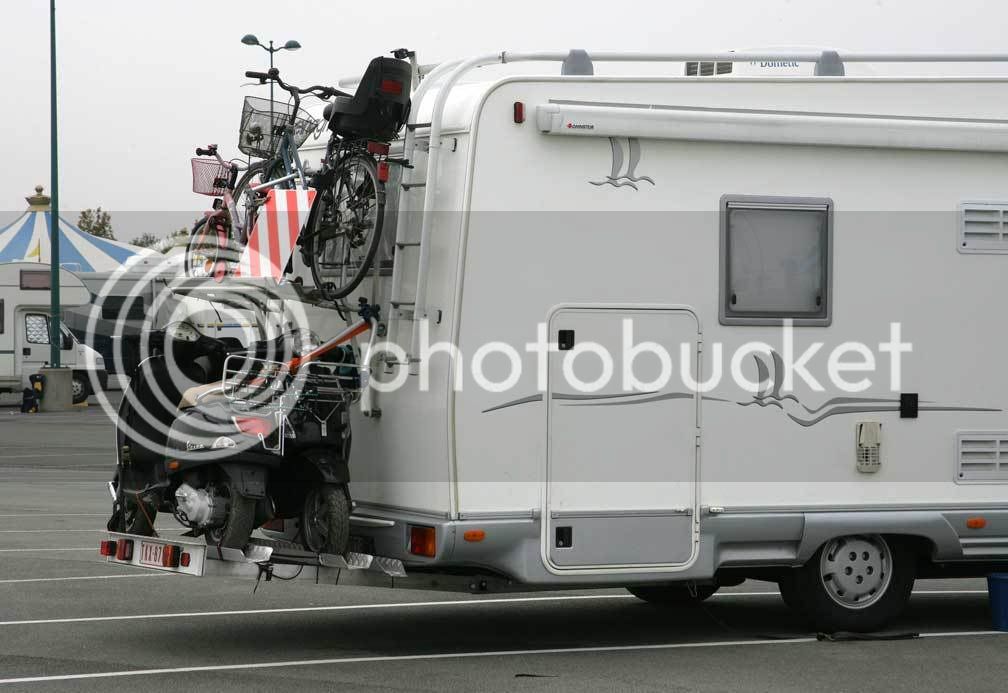 :Sad:Sorry to have to post this, but this afternoon, I was driving past Hilton Park on the M6 and there had been an accident on the southbound carriageway!
A Motorhome was lying there parked on its wing mirrors!
It was a large C class with an eagle on the front of the luton.
Could be an Autotrail or could it be a Swift?
cars involved, but luckily no trucks:thumb:
An ambulance was in attendance but things did not look too bad.
Just hope they were ok and no flying debris hit the occupants
Show hidden low quality content