We are just about to book Anek Superfast "Camping on Board" Bari to Igoumenitsa for May. The Anek website suggests we will be using the Superfast1 boat.

There are a couple of videos on youtube showing the top deck loading with mainly Lorries. It can't be much fun being squeezed in the middle.

Can anybody reassure me its not as bad as it looks?!

You can elect to go inside I guess, but there will still be lorries. One of our more eventful ferry trips was from Igoumenitsa to Ancona, we drove on board with trucks, vans, race cars, caravans, I think Paddy Mc Ginties goat was on board as well. No chairs to sit on, all cabins sold out, some people actually put up tents on the floor to sleep in, it was a very long night!!!
When we eventually docked we sat waiting for the doors to open, but there were no doors, at least not in front of us. We gradually realised that everyone had to turn around and leave through the same door we came through when loading. So all the vehicles previously mentioned had to about turn when their turn came, naturally there were the inevitable inpatient drivers who tried to move a bit before their turn. This led to much shouting, others were concerned that those huge articulated trucks were going to hit their vehicles, pandemonium is probably a fair description.
Hope your ferry is less stressful.

Pembrokeshire, Greece and everywhere in between

We've done that trip several times and @Crazylegs has given a fairly accurate description of an average crossing.

We've also used Anek a few times, in 2017 we did the Bari to Igoumenitsa crossing and it was great and only took 7hrs. Once we drove on, they then turned us around and reversed us into position (which made for an easy exit), with motorhomes on the outside and HGV traffic in the centre. This year we're taking the ferry from Anconna - Patras and "camping on board". 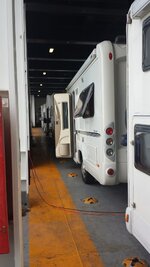 Near Uttoxeter and Crete

MH
Frankia i740 Plus

We've done Camping on Board with Anek/Superfast several times and are booked again in April. As we have a dog it is a far better and cheaper option than having a pet cabin. You also have access to showers and toilets on the deck. We've enjoyed every journey apart from one where after a 2 day strike they hadn't emptied the huge bins which are stored on the same deck as we were parked - the pong was awful! It is a bit chaotic disembarking but the Anek/Superfast staff are great and they know what they are doing. It's important that you follow their instructions and not rely on your mirrors. I don't know anything about the Superfast 1 boat though. We're on the Hellenic Spirit and returning on the Olympic Champion.
OP
S

Thanks all for your replies, I have found another video of the Boat I assume we are using where the Motorhomes boarded first and it looked more promising. On this boat "Camping on Board" seems to happen at the back of the boat in an open section.

We've travelled with Minoan for the last few years with a camper special which includes a cabin and with Anek camping on deck but back in 2012 we came back with Superfast on one of the lower numbered ones, either superfast1 or 2 iirc, it had the open deck at the rear. If you get the open bit its fine but they do sometimes put a few vans under the inside bit if its busy. Its fine but just means you don't get a view, we were ok on our crossing.

Near Uttoxeter and Crete

MH
Frankia i740 Plus

@pjay Did you get the BBQ out later?

The Dudess said:
@pjay Did you get the BBQ out later?
Click to expand...

Nah, but I did go topless on deck. Missus bottled it though.