An easy way to secure your trailer on site with a good quality security chain and padlock.. :Cool:

Nice idea Jim
You might want to add a locking wheel nut as well as the potential thieves can just remove the two wheels that are chained together, put one of the other two on that side and have it away with only two wheels on it mate....
I know this is a remote possiblity but it could happen.... 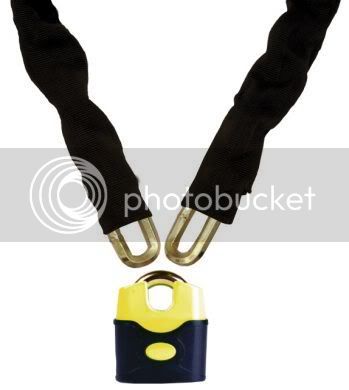 I've said it before on here somwhere the little ball that fits in the tow hitch is the dogs dangly bits, combind with a chain its going nowhere
Geo​

Yes, I'm aware or the weaknesses of this, at the end of the day it will only hinder the opportunist thief.
When on site, or stopped for an overnight, I usually chain the trailer drawbar to the towbar..

Geo said:
I've said it before on here somwhere the little ball that fits in the tow hitch is the dogs dangly bits, combind with a chain its going nowhere
Geo​
Click to expand...


Friend of mine a few years back left his Tabbert caravan at the drop zone in Headcorn Kent, some itinerants stole it at 2 am when he wasnt there by removing the wheel clamp, I dont know how, but the the ball hitch had a big lock on which they couldn't undo, so they just lashed the whole caravan A frame to the back of the car and drove it away,

Someone saw them and followed, they realised they were being followed so they stopped, got out and ran at their follower who was on his own, he managed to reverse fast enough and get out of there way but when he relates the story you really get a feel for how scary it was, , this whole scene was repeated twice, as he continued to follow but from a safer distance. When they realised the follower wasn't going to give in they stopped, unlashed it, took a sledge and an axe from the car and demolished the caravan there on the road and drove off. Index numbers were taken but no one was ever prosecuted.

Moral is, if they want it, they will have it, we've just got to make it as inconvenient as possible.
Show hidden low quality content