Hi all
We are going to be in France next year around 9th - 16th August 2008, staying at Parc Verger. I have always wanted to visit Oradour but never had the opportunity till I realised that the town is only about 20 miles from Parc Verger, so we will be going for a look at this historic site.
For anyone that is interested HERE is a link to their website. It makes fascinating reading. If anyone else is in the area and interested in visiting please let us know and we can meet up... 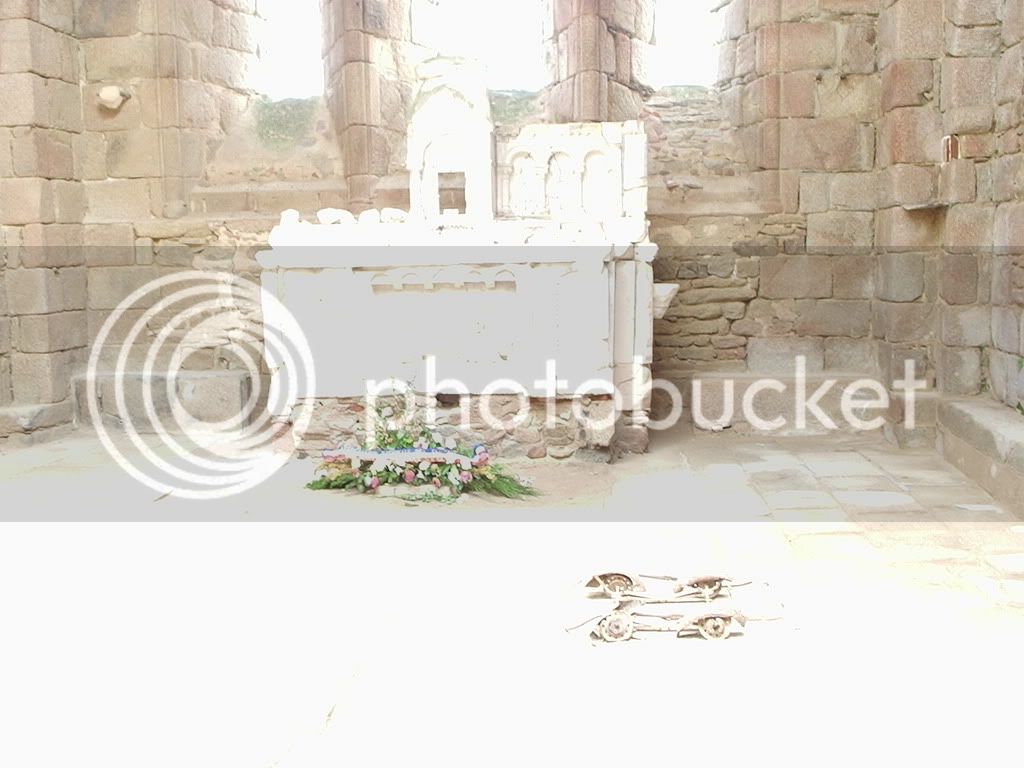 This is the inside of the Church where the women and children were herded and shot, the pushchair was there on the day, you can see the bullet holes in the wall.

We went there earlier this year, but I don't quiet know what it was but something didn't seem to be quiet right about it ? also the information that was handed out and the comentary seemed to leave me wondering why and what really happened ?

kands said:
Hi all
For anyone that is interested HERE is a link to their website. It makes fascinating reading. If anyone else is in the area and interested in visiting please let us know and we can meet up...
Keith
Click to expand...

You MUST go Keith.
EVERYBODY should see this place at least once. It's a VERY sobering experience and a terrible reminder of mans inhumanity. ffiona and I were close to tears at times. It has a VERY strong atmosphere.
Sugest you get there as ealy as possible in the morning when it's quiet because once the coaches arrive, it gets VERY busy. ffiona and I went quite a few years ago when it was really quiet but from what I've heard, in recent years, there's quite a bit of modern stuff (ie visitor centre) been added which might possibly make it a bit touristy and possibly take away some of the gravity of what happened.
The only thing that was a bit suss was the fact that nealy EVERY ruin has a sewing machine in the rubble and I must admit that they did look a bit "planted".
VERY well worth going tho'.
O

Visited in May 2006 Very interesting place and well worth a visit. There is a very nice Aire in the village that was free when we visited

Exp
5 years after 27 of tugging

I visited a couple of years ago with Bertie on our way back from Spain.
A very moving experience that made me shudder....
........and to think this type of thing stil goes on today if parts of the world.

As a previous poster wrote.. "lest we forget".

I went with the kids a couple of years ago.

They went thinking that going to a derelict town would be boring.

We were lucky that when we went there was no one there.

They came away feeling quite uneasy.

Funny though.... we had a dinner with a load of twenty something French guys and girls shortly after, about a dozen of them or so and NOT one of them knew anything about the place.
OP
K

This says it all:


They shall grow not old, As we that are left grow old.
Age shall not weary them nor the years condemn.
With the setting of the sun, and in the morning we will remember them.
Lest We Forget​
Keith
J

went last year stayed on the aire in the new part of the village / very clean etc, you wont be dissapointed and will come away with a lump in your throat and feeling very humble,john.

The other place to visit is Auschwitz, there is a great place to park you RV overnight just 5 minutes away!
V

Oradour Sur Glane is indeed a very moving place. Every schoolchild who lives close enough goes as a part of a school trip at least once in their school "career".

Unfortunately, someone "did up" the place a few years ago, adding extra bits and bobs, so it's no longer exactly as it was left, but it's still a very creepy experience.

There were other towns similarly "hit" by the retreating Nazis ... Tulle was one of them, and although there it wasn't the entire population that got wiped out, it was still very badly affected.

Ironically, the Nazis got the "wrong" Oradour ... there is another not far away (can't remember what the rest of that Oradour's name is), which was a resistance strong-hold, and the idea was, apparently, to get "revenge" for the work they did during the war.

You are right Vanessa - it is rumoured that Oradour sur Vayres (just 4.5km from here) was the one they were looking for although this was never been proven to our knowledge. It is certainly an experience to stroll through Oradour sur Glane and to visit the Church and the Cemetery there.

A classic example of man's inhumanity to man.

you must visit this village, we visited about 4 years ago when returning from Spain, it was late afternoon towards the end of September, we were the only visitors there, very quiet and eerie, not even any bird song, hard to believe mans inhumanity to man.:Mellow:


2escapees said:
The other place to visit is Auschwitz, there is a great place to park you RV overnight just 5 minutes away!
Click to expand...

hi i want to go to auschwitz, was going to fly next year what way do you go if going by motorhome? as this would be a much better option, I have been to several war cemetaries and i do not think that anyone can visit these places and not shed tears, I personally always shed buckets, auschwitz though has always been on my list, as this should never be forgotten, schools should put wars on the agenda so that our childrens children are aware,of the sacrifics that were made in their names and to ensure these useless wars are stopped, lest we forget doesn't seem enough somehow but i for one certainly wont, perhaps there could be a trip arranged to auschwitz:Sad::Sad:
ruth
OP
K

RuthRv said:
perhaps there could be a trip arranged to auschwitz:Sad::Sad:
ruth
Click to expand...

Hi Ruth
Totally agree with your comments, unfortunately though, veterans seem to be an easily forgotten breed nowadays.....
I will wait to see the details of this trip, hopefully yu will be able to put one together for next year?

Hi John
I don't think that we would be able to get our 32 foot RV onto the Aire at Oradour, from the pictures I have seen it looks very beautiful but small. Maybe you can offer some advice?
Thanks

Pop into Parc Verger, visit Bob and Di Banks, their site is just up the road from Oradour!
OP
K

Hi Dick
Please see the first post....... We will be staying at Parc Verger matey :thumb::thumb:

Put it all down to a very decent bottle of single malt that I got for Chrishmash......

In a Ruined State: Chapter 6: Background to the 10th of June

We visited in October last year. There are some large spaces on the aire.
B

Went there last summer well worth visit,very moving.there is an aires on outskirts of new village. graves/church is very sad. blackie

kands said:
Hi all
We are going to be in France next year around 9th - 16th August 2008, staying at Parc Verger.
Keith
Click to expand...

We are going june /july ,going down to Spain via Disney and Oradour with a possible stop at Vanessa's site so will be back before you go Keith.Will let you know what we think when we return.
Rob
2