Tracking Aircraft with a Raspberry Pi and an SDR

SDRs (Software Defined Radios) can be bought for around £30 and connected to a PC and with a suitable antenna used to receive radio signals. I recently bought one to try and detect WSPR signals. WSPR (pronounced "whisper") are HF signals usually generated with very low power, sometimes just mW, and with the right equipment can be picked up thousands of miles away. Each signal gives the location of the transmitter. As you can probably guess from the absence of WSPR in this thread title I couldn't get it to work! I haven't given up and another bit of equipment arrives next week for a second try. While waiting I came across an interesting project which turned out to be amazingly simple and which gives amazing results. Take a look at this screenshot: 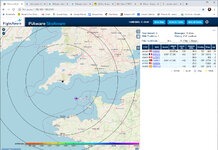 The black dot near Plymouth is where I am and three aircraft are shown which have been picked up by my equipment and their positions plotted on the map. On the right you can see more than three aircraft listed. The ones not showing on the map are probably not broadcasting their positions, some don't. Sadly, this is not exactly the best time to be tracking aircraft, there are a distinct lack of them up there, but at least the screenshot shows it is working.

The equipment needed to make this happen is shown in this photograph. 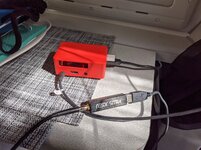 The red box is my old Raspberry Pi 2 and the black thing with the leads at each end is a NooElec NESDR Smart SDR bought for about £30 off Amazon. It is connected to the Pi with a USB extension cable as it didn't work for some reason when plugged in directly. I suspect the case prevented the SDR fitting all the way into the USB socket. This would be solvable with a craft knife but the USB cable works fine for now. The other end of the SDR is the coax cable going to a small whip antenna with a magnetic base.

The first step is to start with a working Pi with the Buster operating system installed. I won't go into how to set this up but you can buy a Pi with the OS already installed or alternatively download it and install it on the SD card with something like Win32DiskImager. However, a new program for creating Pi SD cards has recently been released called the Raspberry Pi Imager which I used for the first time for this project and it worked very well.

I run the Pi "headless" meaning it is not connected to a screen directly. The Pi logs into my wifi network and I access it using what's called SSH and a utility called PuTTY. A bit of Googling will soon find you descriptions of how to set up a Pi for headless running.

The software to make the magic with the aircraft happen comes from this website:

Setup PiAware to directly feed live ADS-B data to FlightAware via a Raspberry Pi running dump1090. Step-by-step instructions along with a link to your statistics and how to register for a free FlightAware Enterprise account.

There are other ways to install PiAware but this way I found the simplest. Basically, using PuTTY you open up a command window on the Pi and then copy and paste line by line the commands shown in the website above. The first line is: (which I've edited to add a space between the // to prevent it showing as a URL)

Paste this in and press enter and after it has finished processing it you can enter the next line: 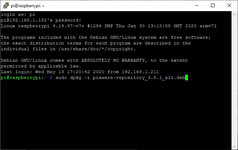 And so on but finishing with this line:

The really clever thing about this system is you don't have to do anything to make it work. You literally just turn the Pi on and it will automatically start listening for aircraft.

On the PiAware website above at stage 6 of the page it describes how you register on the FlightAware website. When you do this you need to have your Pi running and on the same wifi network as your PC. During the registration process FlightAware check for the presence of a suitable tracking device (your Pi) and if found creates an account. When all is working what you can see is as shown in the first screen shot above, your location and any aircraft in the area.

There is also a page where you can see your stats. I started this only yesterday afternoon and left it running overnight. 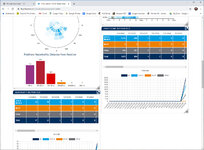 It says it detected 47 aircraft today and 22 yesterday out to a maximum range of 150 to 200 miles although most were closer. This screenshot was taken about an hour ago and the total now is 59 for today.

The MH relevance is I can run this from our MH and this is what I did last night. The antenna is on the roof and the cable from it run through a skylight. The only snag was I couldn't get it to work when plugged into a USB socket in the van. This must be because the socket couldn't produce enough power for both the Pi and the SDR. I'll have a look at this in slower time. If I can get a 12 volt powered USB hub this might solve it but the moment because the van is on EHU I can run everything from a normal mains charger. It will be nice to go down to say Tarifa at the tip of Spain (where we were going this year) and see what is flying around the Straits of Gibraltar. Next year perhaps...
Last edited: May 14, 2020
OP

In this screenshot taken just now: 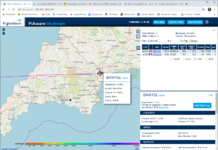 The "pink" aircraft is visible from here - I've just been out into the garden and spotted it to the north. Clicking on it gives more information.

Clicking on the same aircraft in the table on the right brings up a new page with more information about it. This one came from Dallas.

It was very easy, all the clever programming has been done by other people, all I did was copy it.

What is the difference between this and flight tracker 24? (Please keep it short to save your typing skills!)

AC/DC said:
What is the difference between this and flight tracker 24? (Please keep it short to save your typing skills!)
Click to expand...

I think the Flightradar 24 site does the same thing. The difference for me was to be able to set up the detection using my own Raspberry Pi. If anyone just wants to identify an aircraft going overhead Flightradar 24 is probably the easiest to use.

I should add some of the data Flightradar 24 shows comes from individuals running receivers and uploading stuff from their home.

Flightradar 24 publish their own instructions on how to make your own receiver. It looks easier than the system I used. I might give it a go and see how I get on.

SW London, Poland and all Europe

DBK said:
I think the Flightradar 24 site does the same thing. The difference for me was to be able to set up the detection using my own Raspberry Pi. If anyone just wants to identify an aircraft going overhead Flightradar 24 is probably the easiest to use.

I should add some of the data Flightradar 24 shows comes from individuals running receivers and uploading stuff from their home.

With flight radar24 we can track any aircraft in the world, not only overhead. For example when OH's Sister is flying from Turkey to us in Poland we can see it get airborne from Mugla, see its ETA here and plan our car trip to pick her up accordingly.

All available on our laptop in MH via our telephone tether.

And Flight Radar 24 is free.

Your set-up looks very clever technically but does not meet my KISS criteria.

You're absolutely right of course, you can get the same information for nothing off various websites. I also have an app, Marine Traffic, which does the same for ships. Useful for spotting your ferry. ?