I am trying to help out a friend who is wiring up an RV.
The problem I have is that there is a requirement to connect 220 volts AC via the shore supply to the RV whilst maintaining the ability to use the Genny.
The way I see it is that he needs to have a selector switch which will allow the shore supply to feed 1) the transformer to provide 110 volts and 2) power up the installed 220 volt ring main, it is also required to isolate the genny from this 220 volts so as not to cause any PCB damage. On the other side the genny supplies 110 volts to 1) the installed 110 volt ring main and feeds into the transformer to provide 220 volts to the 220 volt ring main, but it is also neccessary to prevent volts appearing on the pins on the 220 volt inlet plug, which is why I think a change over selector switch is required.
My question is, have I got this right? Can you feed power both ways across the transformer or do you need a dual primary transformer (and if so where to get this from) and the only selector switch I can find is a 32 Amp, 4 pole change over switch that costs around £60?
The option to fit a site type transformer cannot be considered.
I would be very grateful for any advice on this subject as I am wasting a lot of time phoning around and googling for answers......
TIA 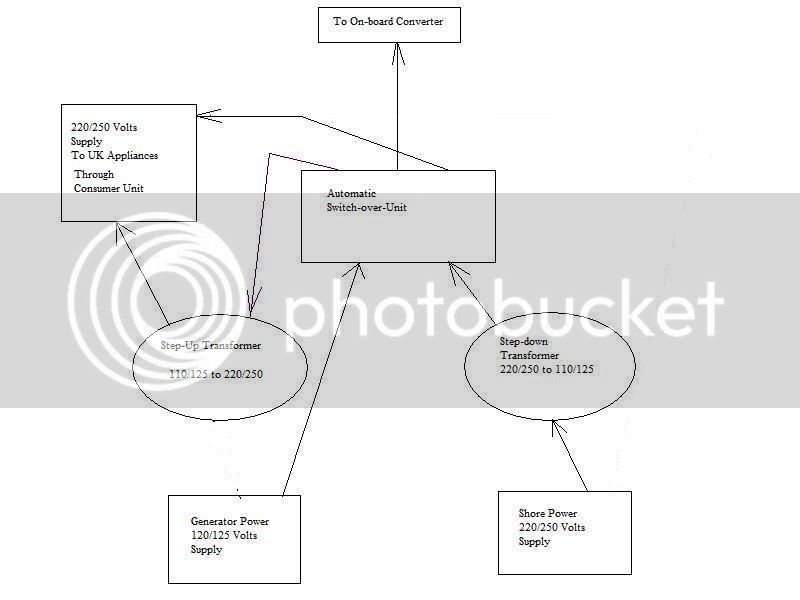 Thanks for that John
So you do need two seperate transformers then?

kands said:
Thanks for that John
So you do need two seperate transformers then?


:Cool: You can use a Step Up/Step Down transformer. But it is a BIT (??) more difficult to do. It may require 2 Automatic transfer switches.

Here is another method:- 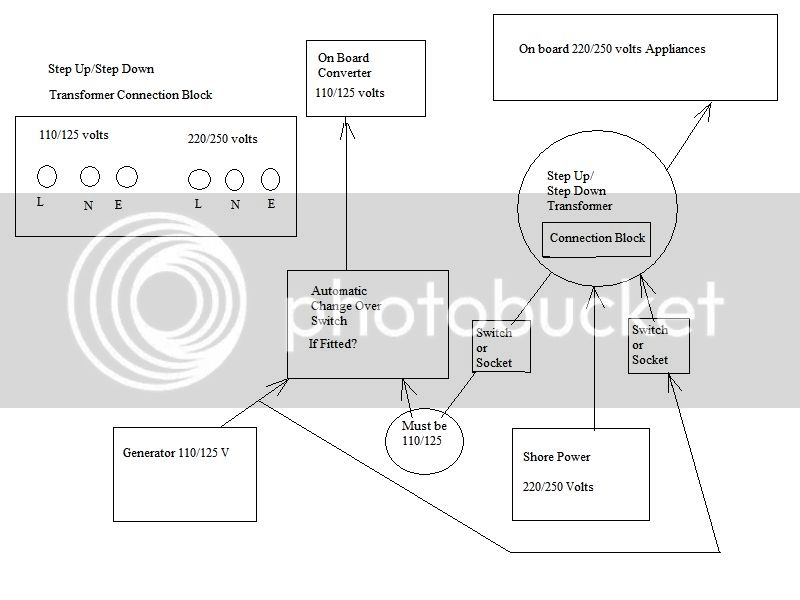 Hi John
Just to clarify... On your schematic it shows 3 feeds from the auto change over switch. 1 to the onboard converter, 1 to the step up transformer and 1 to the 220 volt load. Is the 3rd feed correct? Or should that go to the 110 volt load?
Sorry to be a pain but my brain has stopped running on this and I am feeling a bit lost mate

I was just at the point of answering when you edited your post.

Hi Keith here's how mines been done by Chase Electrical.

The shore line comes in goes straight to the ELB from that it goes to the autochangeover switch fitted by Winnebago to prevent the 110v found on yank sites mixing with the genny. All RV's have either an auto or manual changeover switch somewhere.

You connect the shoreline and the power goes through the autochangeover switch (the default position isolates the genny) over and into the relay in the tranny and feeds the 230 and tranny, and isolates the 110v output of the tranny from the genny.

Can you understand that?? if so could you explain it to me.

The object of all this is to prevent the shoreline plugs becoming live, and prevent genny power mixing with shoreline power in the event somebody started the genny while still connected to the EHU.

Seriously if hes not sure what he's doing he shouldn't be touching it. Making a mistake could be very expensive as well as dangerous.

Thanks Olley
That is the type of solution that I had in mind as it does prevent accidental power selection to the wrong place. My primary concerns are that the shore supply connector NEVER has power onto it unless it is connected and also to protect the genny from being back fed......
Will pass this on and hopefully find the solution.
It is not that the guy doesn't know what he is doing, more a case of covering all the angles without paying someone £1500 to do it for him

Thanks all and any more ideas are very welcome