TITUSVILLE -- - Dan Hylle knows firsthand the enjoyment that comes from living the recreation-vehicle lifestyle. The Mims man also knows the smells, gnats and frustrations that sometimes come along for the ride.
So when Hylle came across an opportunity to offer a service to clean RV holding tanks, he grabbed it and started All Pro Water-Flow Central Florida.
[/FONT][FONT=Times New Roman, serif] The business, a partnership-cooperative with Colorado Springs-based inventor Preston Hall, cleans RV and boat holding tanks with a high-pressure water system. "I've never gotten as excited about an business opportunity in my life," Hylle said. Typically, RV and boat owners use chemicals to maintain the tanks that hold waste from the vehicle's drains and toilets. [/FONT]
[FONT=Times New Roman, serif] 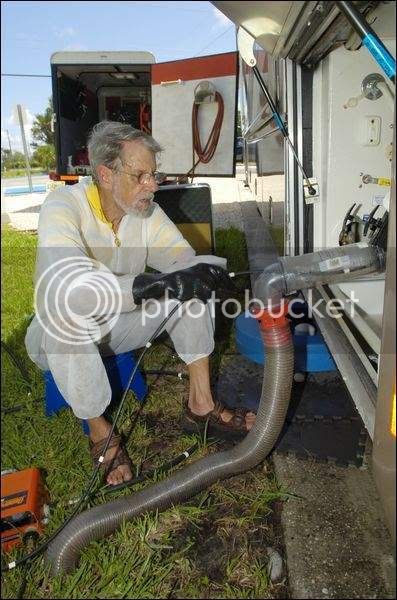 The chemicals liquefy solid waste, creating a slurry that can be pumped out of the tanks. But the chemicals can cause problems, especially for people who live in RVs full time, Hylle said. The slurry often coats and dries on sensors that indicate when the tank is full, which can lead to a false reading.


The mixture also can create a smell and an insect breeding ground.
"It's been one of those things that no one wants to talk about," Hylle said.
After dealing with the same problem, Hall, the Colorado inventor, decided to take the tools he used in his 35 years as a plumber to his holding tanks.
He found the buildup with a fiber-optic camera, then used a high-pressure water hose, spraying at 1,500 to 6,000 pounds per square inch, to blast it away. "After seeing the sensor panel read 'empty,' I knew I might be onto something," he said.


In the four years since Hall launched the company, the All Pro Water-Flow brand has spread to 10 states through partnership-cooperative agreements in which owners such as
Hylle buy the exclusive operating rights for an area. Hall also
has had interest from people looking to expand it into 10 to 15 more states and to Canada, Great Britain, Japan and Australia.


Hylle, who has rights to the eastern Central Florida region, began the mobile service this month. His area runs along the coast from Palm Coast to Fort Pierce and west to U.S. 27 from Ocala to Lake Okeechobee.
Hylle will travel to different RV dealerships, where he will clean "black water" holding tanks, which contain toilet waste, and "gray water" holding tanks, which collect water from sinks and shower drains. He also will travel to RV owners if they have access to water and sewer services.
The cleaning takes about one to 11/2 hours and costs about $195.
Hall and Hylle also tout the service as a "green" way to maintain tanks. Owners no longer would need chemicals to maintain the tanks if they had one yearly water cleaning. "There is no argument cleaning something with water is better for the environment than cleaning with chemical," Hall said.
[/FONT]

You know what they say
"where there's muck there's money"
Geo

Good business in the US as they have zillions of RVs, I think a business like it in the UK might struggle.

On board water tanks.

First time overnight in the new to us PVC
2