Hi from a semi-Newbie in sunny S.France.

Hello to all. I had, once, 35+ years ago a Commer walk through conversion, then briefly a split-screen VW camper, before changing career & being away at sea for many years. My return now to the MotorHome fold is with a rather different vehicle, a 1977 Mk1 Ford Transit purpose built, long wheelbase iHome model.
I was only able to buy 'Trinny' by accident, when the seller was badly let down, twice, by eBay auction bidders, and had contacted me, among those who had been in touch to see if anyone was still interested, even though it was then listed as Sold-Auction ended! I jumped at the chance, even without actually inspecting the vehicle, partly as it was actually by then in S.France, fairly close to where I lived.
She had been 'stored' for 3 1/2 years in a semi-open barn, with mice nesting in the heater box, ( & several other hidden places !) and with grass growing up through the engine compartment, and the keys still in the ignition! ( I doubt one could do that in the UK these days !) but....... Trinny started first go, even with the, by then 4 year old battery! How could I refuse!
Mostly original, with several top-end Ford Transit Options, and other top-end iHome fittings, she was/is in need of a fair bit of TLC. A complete new braking system proved essential, and costly, new headlamos, fog lamps, internal rewire, etc, etc.
Sadly, last Saturday, vandals broke in, wrecking/tearing through the rear bodywork panels, ripped off the rear door & stole the new 3way Thetford fridge, new cooker, ripped out the original Zig Distribution Control Box, plus a 4way USB charger, stole lots of tools, plus a box of newly acquired, hard to find, Mk1 Transit spares, trashed lockers & drawers, and basically wrecked the rear of the vehicle. Sigh, double Sigh!!
So I'm now starting on the 2nd rebuild/restoration in 20 months, although mercifully despite all 12v circuits being cut to get the Distribution panel out, the starter motor circuit is completely independent, so Trinny started up ok, her rear end held together with screws, tape, string & wishful thinking, and is now in a (another!) farmer's barn, awaiting the start of my bodywork apprenticeship! I'm also bound to be asking yoyr help with installing another Distribution Panel and rewiring!
Watch this space for the "Next Thrilling Instalment" . SirPhil

1st photo is 'as found'
2nd photo is 'cleaned up & drive back stopover'
3rd photo is taken yesterday, with rear panelling screwed together, pre driving her 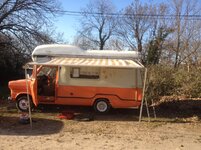 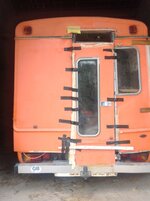 to farmers barn for repair! 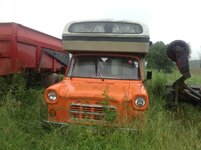 Sorry to hear about the break-in. I suspect you’d been watched and the thieves knew about all the newly acquired items.
Onwards and upwards though, I’m sure Trinny will soon look fab.

Hi and welcome to FUN.

Welcome to the fun. At the moment we are nearby in Carcassonne doing the canal du midi area. If we see you, can’t miss you really, will say hello.
Sorry about the break in, some real scumbags about.
Phil

Not lost but not far off

Exp
owned a motorhome eons ago .

Anywhere that a motorhome goes

Welcome to the house of fun
Hope the repairs go ok,
I bet you end up with an even better van than before although i would love to get my hands on the so and so's that made so much damage for so little gain.

to Fun. You have your work cut out, again, good luck, I'm sure you will finish it . Good luck.