From the Daily Telegraph..

</td></tr></tbody></table>
<table border="0" cellpadding="0" cellspacing="0" width="100%"> <tbody> <tr> <td> The Monaco Dynasty motorhome has its good points, but décor is not one of them, writes James May
Every year, somewhere on the planet, some sort of global association of caravan, camper-van and mobile-home manufacturers meets for an annual conference at which it reaffirms its objective of lowering world standards of taste in interior design. What other explanation can there be for the décor in the Monaco Dynasty motorhome I'm driving around California? What's more, I think I have found the venue for this year's gathering. It's the Mount Madonna Country Park, Santa Clara, where the early morning sun, fragmented by the overhanging leaves of ancient sequoia trees, bursts through the windows and skylights of countless "recreational vehicles" and dapples with perfectly golden light some of the worst cushions I've ever seen.
<table style="width: 37px; height: 15px;" align="right" border="0" cellpadding="0" cellspacing="0" hspace="0"> <tbody> <tr> <td rowspan="1" width="8">
</td> </tr> </tbody></table> On the whole, I'm becoming quite fond of the RV. It's 42ft long, or 4ft longer than the timeless Routemaster bus, and in Blighty I'm not sure I'd be allowed to drive it. Here, I signed a few forms, handed over the cash, and was free to demolish whole housing estates. In other guises, this vehicle could transport two football teams or, in the wine-growing regions of Paso Robles, 500 Mexicans. Arranged as the Dynasty, it is expected to be home to just two people.
Starting from the door, the visitor moves through the sitting room, the dining area and then the kitchen, complete with American double-door fridge packed with flavour-free cheese and industrial Bolognese sauce. (Or at least until some idiot* leaves the special latch undone and it all falls out on a fast left-hander because the doors have opened.) Through a sliding door is the bathroom and the small room that Americans call "the bathroom". Open another sliding door to reveal the master bedroom, with wardrobes, laundry room and king-size double bed.
<center>
</center> It's pretty accommodating as it is, but when it's parked up, the sides of the whole rig can be made to expand outwards to double the floor area. It boasts two home cinemas, is the biggest vehicle I've ever driven on a public road and the only one equipped with a doorbell. I imagine this was what it was like being in Led Zeppelin. But, obviously, I have a few complaints.
One is that every few days the "black tank" and the "grey tank" have to be emptied at RV waste stations. The grey tank holds all the waste water from showering and washing up (ie not much) and the black tank is full of my travelling companion Oz Clarke's number twos (ie bursting).

Another complaint is this. At proper trailer parks full of banjo-playing Republicans, the rig can be hooked up to a mains electricity supply, just as a regular caravan might be. Elsewhere, though, it relies on a small generator in its nose that must be run constantly if the white Zinfandel in the fridge is to remain at an acceptable temperature. This does not bother the wine bore in his luxury suite aft, but as I don't like him in that way I sleep on the floor or the sofa in the sitting room, some 30ft for'ad. It's not the most refined diesel engine in the world, so I feel as though I've been sleeping with my head against one of those yellow roadside generators that run all night solely to power a small yellow lamp that's been nicked by some students anyway.
Finally, there is the issue of the furnishings. What in the name of the Almighty were the creators of the Dynasty thinking about? The television series? Given the holiday remit of what is really a very large camper van, I would expect something of a holiday atmosphere on board; that is, simple, bright and cheerful colours, gaily patterned curtains, bold and functional design and wipe-down materials everywhere. Instead, the Dynasty is a paean to the brown end of the colour spectrum. Fixed furniture is upholstered in ruched tan leather, the soft ones are sculpted dark brown and brick, the carpet is a dark brown leaf motif on a pale brown background and the curtains are beige. The fitted cupboards are some sort of mahogany with baroque relief carvings, the handles are pseudo-bronze and the worktops and table polished cream Italian terrazzo with a hint of coffee granule. For a vehicle intended as a place of recreation and leisure, it is overwhelmingly institutional.

I am with James May on this one.. Most RV interiors are a bit too "Laura Ashley" for my tastes 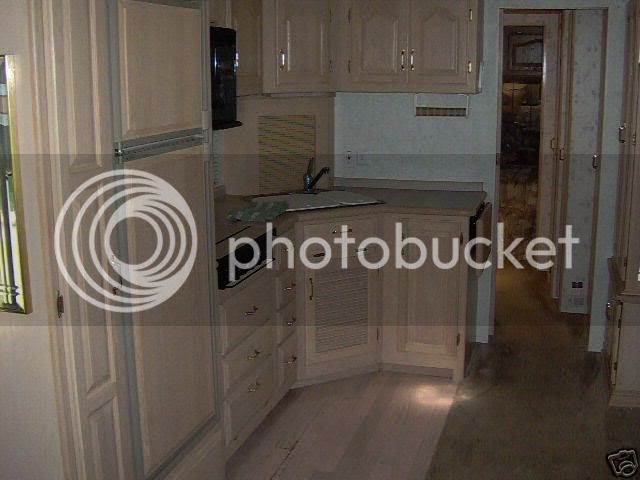 You haven't changed my mind.

The mahogany kitchen does nothing for me in a bricks-and-mortar house, so in the confines of a motorhome no matter what the size, it would be yuk, yuk, yuk!!

However, JSWs pic of pale units (is that "maple" or "limed oak"?

I guess you're at the mercy of whoever chose the decor in the first place - there MUST be a choice when buying something of this calibre new, so if the first owner of "your" rig had tastes that don't truly match with your own, you're stuffed!!

vanessa said:
I guess you're at the mercy of whoever chose the decor in the first place - there MUST be a choice when buying something of this calibre new, so if the first owner of "your" rig had tastes that don't truly match with your own, you're stuffed!!

As usual when it comes to RV decor? It is just like the fashions that go through Homes & Gardens. I remember the days of Orange Kitchens and Dark Chocolate Fire places. Then again. I remember when everything was painted dark green or brown with bright flowered wallpapers. Then there was flock wallpaper. Fashions change. It's the same with Motorhomes.

You ought to go house-hunting in France then!! They've STILL got the disgusting huge gawdy flowers, flock wallpaper AND WORSE!!