Another thread got me thinking..Hope I can explain this enough for someone techy to advise.
The avtex 163 we have used to belong on our last MH and as the sole tv and we could easily record straight from the tv to the built in USB using a memory stick.
Now we have the AT with flip down tv at the front of cab....so in the lounge area we have our avtex 163 which is on the anologue setting and is being used as a monitor...plugged into the spare aerial socket.
What we see on the flip down we also see on the avtex but now it wont record, presumably as its only a monitor now?

Can anyone help with a workaround please.

Hi Sandra
We've got an Aldi tv connected to the Status booster along with the inbuilt Auto-trail media centre and drop down monitor and can record on a USB hard disc.
Works both on the pre-wired socket in the bedroom and a new output I put in the lounge.
Does the tv record option work on analogue or only digital signal (if you're still getting analogue reception)?
OP

Not too technically minded gellyneck but the Avtex doesnt work when I move the source to digital tv. Obviously somethong to do with the lead. Aerial just goes from the avtex into the lounge socket on the wall.

Did you have to run a seperate lead from tv to booster? I was thinking maybe a split connector but aint got a clue really.

Will try and keep it simple, no disrespect intended.

We've got a 2013 Savannah that has the standard Status whatever aerial on the roof.

The cable from this (standard co-axial) feeds into the Vision Plus booster box which is just below the aerial.

There are two pre-wired co-axial cables from this booster and one feeds the back of the inbuilt media centre in the dash on which we can get the TV, this is then pre-wired to a drop down monitor above and between the two cab seats. There is a further socket in the bedroom fed by the second cable out of the booster.

The cable I had disconnected from the booster connected to one of the outputs on the splitter and a further co-axial lead I made up connected to the other and to the Aldi TV aerial input socket. The TV being mounted on a bracket I made.

Surprised, or maybe not given the poor quality of the inbuilt media centre, that you don't get digital signal reception. I thought all analogue was now switched off but maybe I'm wrong? To tune, and this is from memory, I select DVB-T from the main menu and then automatic search. It goes off and does it's stuff and comes back with, hopefully, tv channels that we can watch on both media centre and the drop down monitor.

I then have to tune in the Aldi TV using their process.

So, we can get two different channels on the media centre and the Aldi.

The Aldi can also record as I said.

What do I suggest you try? The above first. If it still doesn't work try connecting the Avtex directly to the booster using a cable. You might need to make one up or source. You want an F plug on one end and an RF on the other (or an adapter like this http://www.maplin.co.uk/p/metal-f-plug-to-coax-socket-adapter-qp41u you can get them cheaper but thought you might be able to get at Maplins in Glasgow when you're maxing out the credit card in St Enochs Centre) and then use a standard domestic aerial lead.

Once connected then tune your Avtex and see what you get. Once you've done that let me know how you get on and we can take it from there.

Dependent upon where exactly you are and when might be able to pop over and see if I can help if you're still struggling. Would I still look out for the baot?!!!!

Sorry it's war and peace, by the way.

AT media systems too complicated and power hungry for their own good! Run a coax cable from tv direct to status booster,if that works you could try to find other end of lounge socket,disconnect from AT box and connect that to status booster.Sounds simple but took me ages to work out how to separate bedroom tv from bedroom feed! R.

Oh beaten to it,!

btw this is the kind of pre-made cable you're looking for. http://www.toolstation.com/shop/p51626
Won't be great quality but should do the job for you to try out.

I will give it a go on Mon when I'm back home. Thx guys. Just miss having the odd thing recorded if im out. Too much bandwidth to watch on catch up tv while in the MH.

Where are you just now? And don't say in the motorhome!
OP

@Gellyneck. I'm at the country western festival in Kelso. Just hanging around the MH while mum is in giving it yeeha line dancing

irnbru said:
@Gellyneck. I'm at the country western festival in Kelso. Just hanging around the MH while mum is in giving it yeeha line dancing
Click to expand...

So hanging onto the roof with one hand and a glass in the other then!
Weather a bitty better today?
OP

Oh I wish! Nah the only glasses are the ones on my face for reading. Dieting and wine doesn't work :')
Rained from tea time last night to 10 ish am this morning. Cloud then sunny but still damn cold for May

irnbru said:
Oh I wish! Nah the only glasses are the ones on my face for reading. Dieting and wine doesn't work :')
Rained from tea time last night to 10 ish am this morning. Cloud then sunny but still damn cold for May
Click to expand...

Hope the reading material is The marshalls guide to running a rally or whatever it's called!
Why a diet? Don't think The Kelpies will collapse under you!
You all sorted for The Wheel?
Smashing day at home today (sorry, didn't mean to say that!)

How do you know what happened at my home today?@gellyneck and yes I have downloaded the rally book. At least im making an effort to try.

irnbru said:
How do you know what happened at my home today?@gellyneck and yes I have downloaded the rally book. At least im making an effort to try.
Click to expand...

Well weather was that good in Glasgow today wife was threatening to tell me to get the barbie out!
Miserable this morning. Dugs soakin'!
OP 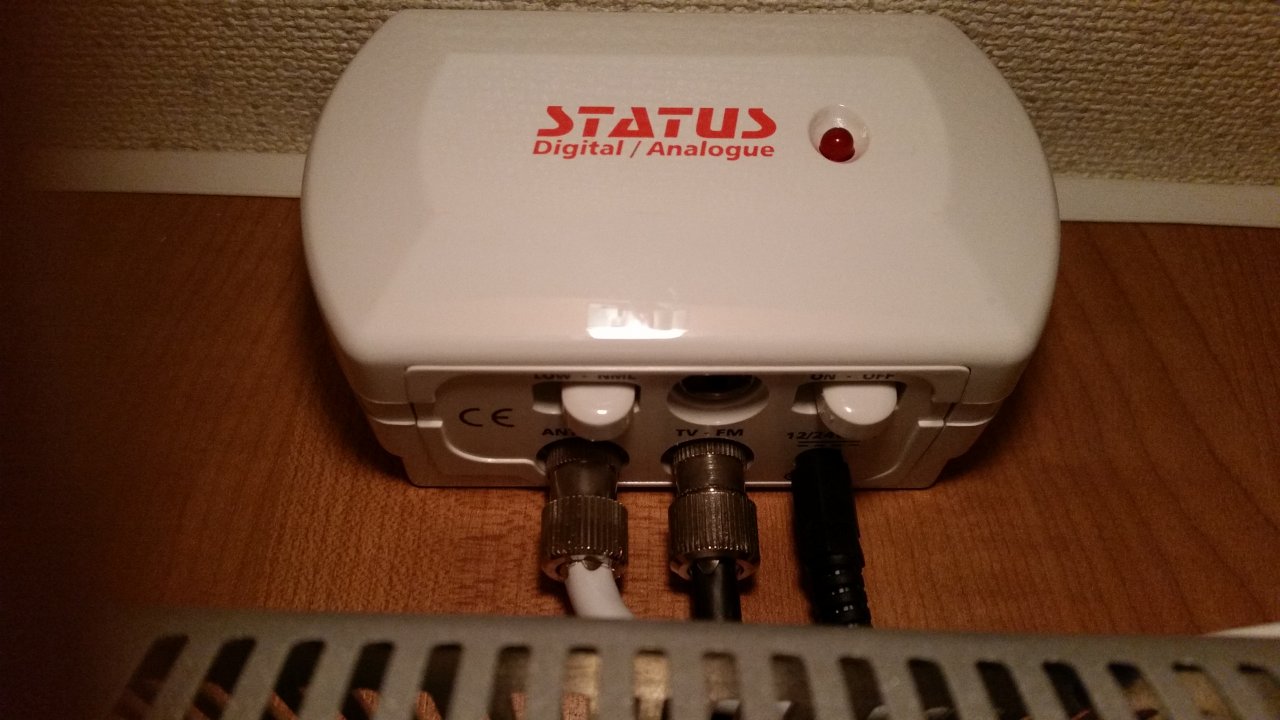 Hiya
Guess mum is out on the ran dan leaving you on your tod again!
It seems you've got a different booster box than we have on ours however shouldn't be a problem.
Starting from the right - power supply to the booster, RF output to media centre and input from aerial (the last two might be the other way round as can't quite make out the text next to each).
It also seems you have RF, rather than F type sockets on the booster.
So, what you'll need is an RF splitter like this http://www.toolstation.com/shop/p89954 and a cable like this http://www.toolstation.com/shop/p38887 however before getting them you may already have something like the cable at home connected to your TV.
Firstly unplug the output cable and connect the "new" cable to the same socket and plug the other end into your Avtex TV. Tune TV as normal. Do get a digital signal? Can the TV record?
If yes to both get the splitter (be aware that splitting the signal can degrade the quality a bit particularly if you are in a weak signal strength area) and plug into the output socket on the booster. Plug the "new" cable into one of the outputs on this and the original cable to the media centre to the other.
Assuming you've still got the Avtex tuned in you should get a picture. Can you still record?
Tune the media centre. What do you get?
Assuming pictures on both you should be able to watch two different channels so you can record Corrie on the Avtex (with the sound muted!) whilst watching Eastenders on the other.
Let me know how you get on and if the fluttering of the baby blues fails miserable give me a shout.
BFN
Show hidden low quality content