Hello,
I thought I'd post this up in the hope it may help others. I recently bought a 2006 model motorhome with a SMEV cooker, and the oven was hopeless - it didn't get anywhere near hot enough, I tried to cook some oven chips for the kids and after an hour they still weren't done. The grill was none too impressive either! Having Googled the problem I found that it's far from rare, with a number of solutions suggested, the most successful seeming to have been either drilling out the jets - a bit drastic! - or changing the regulator to get a higher pressure. However, I've managed to sort mine now, and in the end it was quite an easy fix.
This is the cooker - a SMEV model 400. 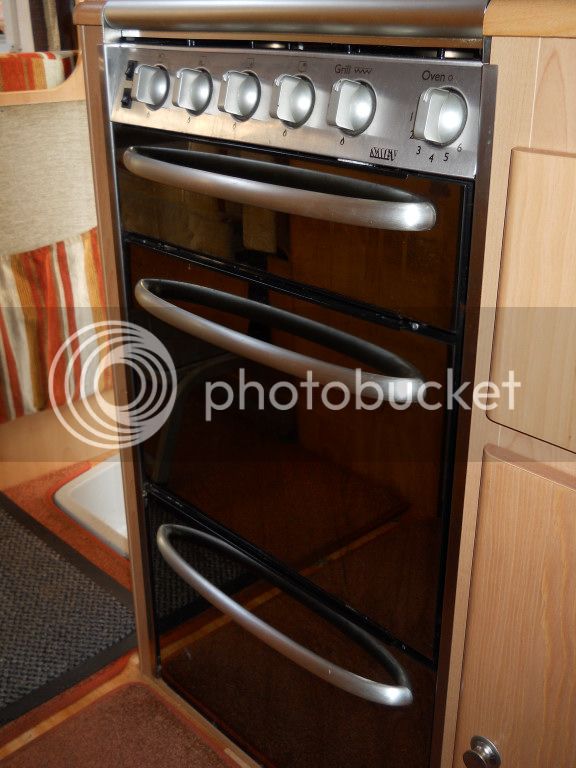 I run the MH on propane, and like all of the more modern motorhomes it has a wall-mounted regulator that gives 30mbar pressure. From what I'd read online, I had a suspicion that the cooker was an Italian spec one (it's an Italian motorhome, although sold new in UK and right hand drive) and was designed to run on the older 37mbar pressure regulator for propane. I got hold of the UK Dometic agent, and of course the first they wanted was a picture of the specification label - which is of course, Sod's Law says is on the back of the cooker...... 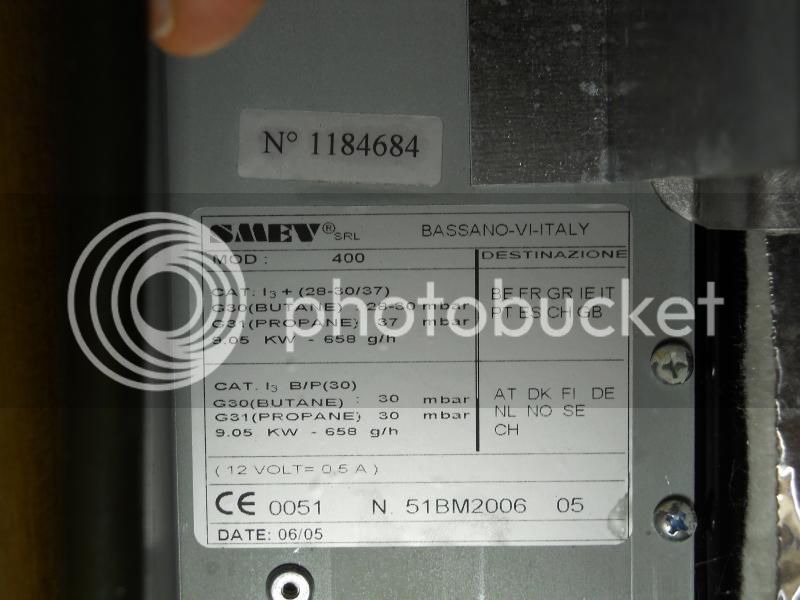 The label confirms that for both the Italian and UK market, it's designed to run on 37mbar for propane, and 28 to 30 for butane. My initial thought was to change the regulator to a 37mbar one, but typically whilst the fridge would be fine with that, the water heater wasn't.

So, the only other thing to do was change the jets on the oven and grill.

Note that this is NOT advised by the manufacturer - if you follow what I did below, you do so at your own risk, don't work on gas unless you're a competent person, etc etc. If you're not sure then get a qualified gas fitter to do the job for you!

Dometic UK advised that they don't sell jets in different sizes, and advised "You could try moving the tube style thermostat probe to artificially make the cooker work harder" - which simply won't work as far as I can see, the problem was not enough gas going to the burner to get the oven hot enough - the thermostat will have no effect unless it's faulty and was cutting the temperature down too early.

The jet is a very small brass fitting with a tiny, but very precisely machined, hole in the end - it's this hole that lets the gas into the burner of your oven, grill or hob ring. This is a jet, next to a pound coin so you can judge the size:- 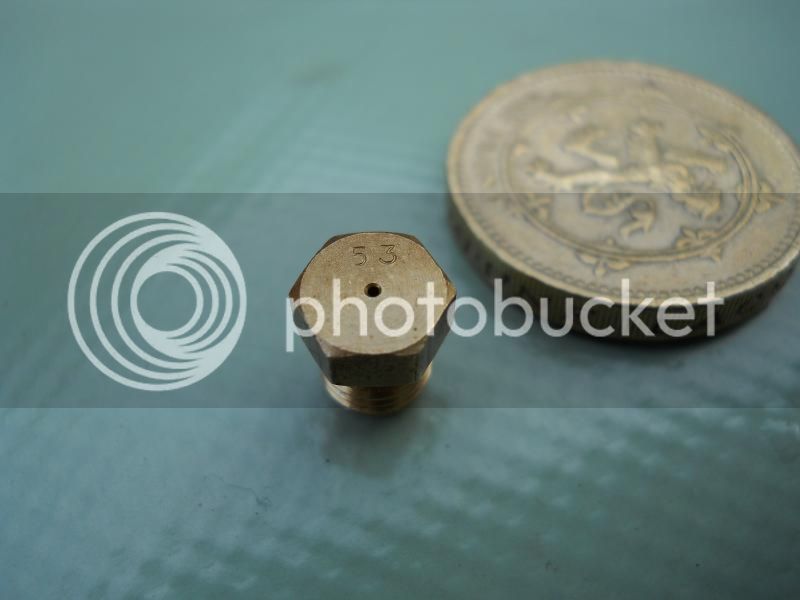 The good news is, most jets are interchangeable between different manufacturers - SMEV ones take a 7mm spanner to undo them, and I'm told that if others also take a 7mm spanner then the thread is generally the same. Most seem to be like this, not just for motorhomes but for domestic gas cookers to, where jets can be changed to enable them to be used with propane gas cylinders rather than mains natural gas.

So - a bit of research showed that my oven should get to 240 degrees Celsius on maximum heat, which it clearly was getting nowhere near. The jet sizes shown on the Dometic website are 0.62mm for the grill, and 0.53mm for the oven.

Jets are precision items - don't think about drilling them out yourself unless you've got access to a decent lathe.

The oven jet you can actually get at without removing the cooker, if you look in the cupboard underneath the cooker it's holder is here, circled in green:- 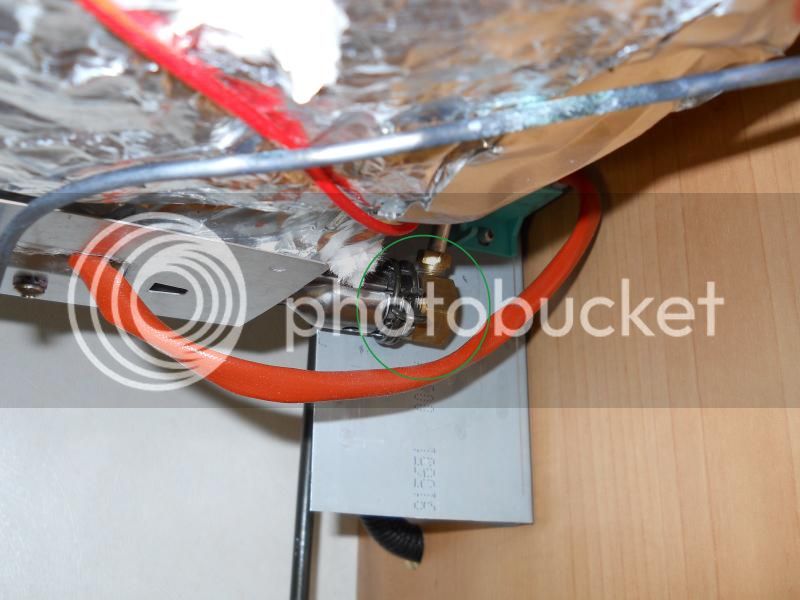 But as I was changing the grill as well, the cooker had to come out. First thing was to disconnect the leisure battery, then the gas - cylinder disconnected first (!), then in my case there was a joint on the supply pipe inside the cupboard under the cooker. The pipes were rigid, so this needed undoing before the cooker could be slid out. It's held in to the cabinet with various screws around the periphery of the hob and door frame. With these out the cooker can very carefully be pulled forward out of the cabinet, watch the power lead though - there wasn't much slack in mine. The cooker was a very tight fit in the cabinet but it does only need to come part way out.

Then you can see where the jet holders are, circled in green again below, note the grill one is already out in this picture:- 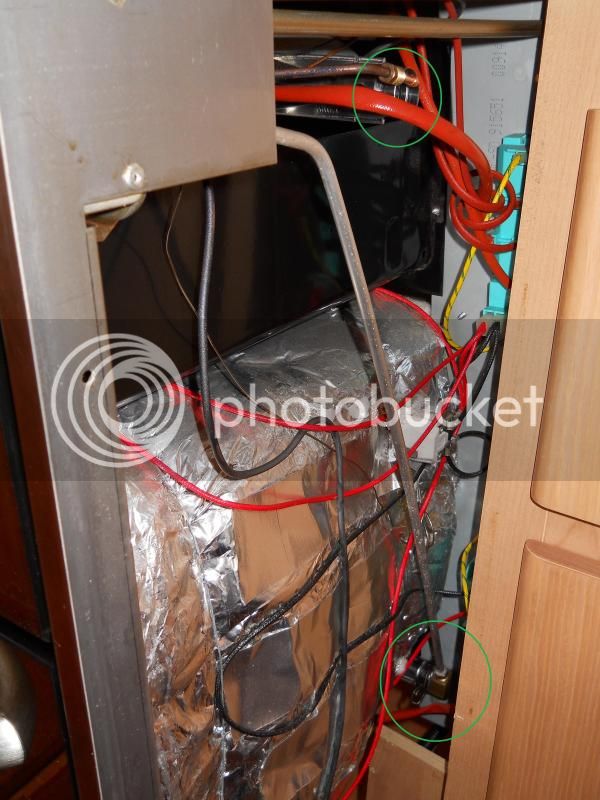 The jet holders can be unscrewed from their supply pipe fittings, be careful to hold the holder firmly with a large spanner whilst you're unscrewing the fitting, they need supporting so you don't twist them or stress the supply pipes - it's only a fine threaded brass fitting after all. Once that's off, there is a large black clip that holds them onto the burner which needs the ends squeezing with some pliers, then the jet holder just slides off the end of the burner - despite appearances it doesn't unscrew. If it won't come then there are two metal tags which need bending out slightly to make them release. Here's the jet holder with the jet in it, you can see the two longer metal tags that you may have to bend out (the ones with curved ends) and the black clip that you need to squeeze open with pliers:- 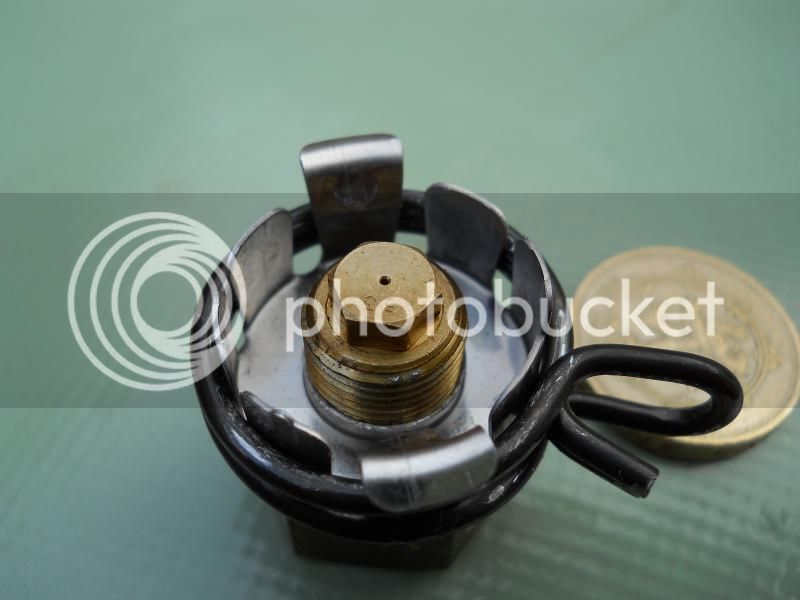 Unscrew the jet, screw the new one in, then reassemble being VERY careful not to cross thread anything. I'd strongly recommend using leak detector spray on the supply pipe joint going into the cooker - available at any plumbers merchants, or Screwfix sell a can for less than £4. Even though I did the joint up what I thought was tight enough, I found I had a tiny leak and needed to make it a bit tighter still.

The results - well, the flames all looked fine, they were the right colour and burning well. For the grill, a slice of toast cooked in 3 minutes (with the grill pre-heated) - much better than before. For the oven, oven chips which were supposed to be cooked at 220 degrees for 22 minutes were just done after 25 minutes on full gas. A big improvement on before where they simply wouldn't cook at all! If I wanted to then I could change the oven jet for a 0.71mm the same as the grill (the Ebay kit came with 2 that size) but I think that may be too much.

So there you go - apologies for the marathon post but it seems to be a common complaint so I hope this will help someone else. To repeat though, the manufacturer does not recommend this, and if you're not sure what you're doing then don't work on your gas system, get a qualified gas fitter to do the work for you. Follow the above at your own risk!

one of the most instructive and useful posts I've read.. top post