In Van. Cheshire until this ends...

For a week or so I've been thinking about having the ability to angle the solar panels on next build, to extend the months I'm likely to be solar dependent.

I already have 400Ah of LiFePO4 and can go 3-4 days without any charge.

Initially, I was thinking of a mechanism to lift the panels on the awning side, then have them slide down the drivers side of the van a bit. I did a few designs, but they all had faults. Plus, the van is more likely to have the awning side facing the sun. So I looked at it a different way.

What about if I built a large roof tent with the solar panels on top. I'd then have a spare bed for when Nieces and Nephews want to come away for the night, plus it would be ideal for the Missus who is into night photography. I came up with this: 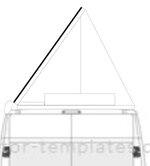 I've added a 90cm wide mattress, which would probably be inflatable as only for occasional use. At first I thought a ladder on the drivers side of the van to get in and out, but now thinking of an internal ladder and hatch through the roof. My panels will take a space of 3m x 1480mm, so plenty of length for a bed and a hatch. Thinking like this:

The large rectangle in the middle would be the mattress with the hatch in front. The other two boxes are just where a bed and the bathroom is inside. A ladder could fit against the outside of the bathroom wall.

So it could be opened/closed from inside, I could add solenoid shoot bolts to lock/unlock, then have gas struts for the lift. The tent part I'd have to have made (probably by a VW pop-top refurbisher), but the rest could be made from aluminium box section.

Anyway, a work in progress. But I do like the concept. To give a better idea, imagine this a different shape and less industrial, with solar panels on the top:


Obviously not good to have up in high winds, but if these roof-tents work then so should my idea? Anyone have any thoughts or suggestions?

I would be inclined to fit solar on that roof tent and just fix the lot to the roof------ very simple job without chopping the van about------- with that amount of solar you wouldn't often need to tilt the panels------- tilting on one side only would obviously mean facing the van the correct way but not an issue in most situations.
Might have to improve suspension to maintain stability
Show hidden low quality content
You must log in or register to reply here.
Share:
Facebook Twitter Reddit Pinterest Tumblr WhatsApp Email Link