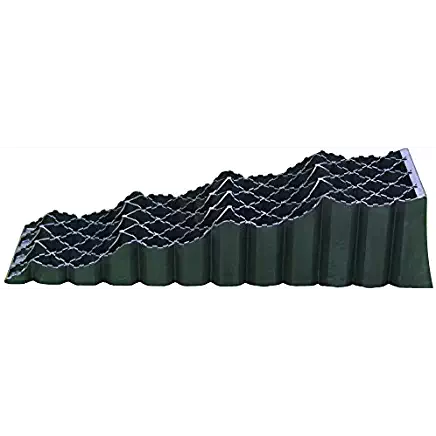 I have a pair of quad ramps which have always provided enough lift to get me level or nearly so. I am nervous about parking on the top space in case I overshoot (my van is an automatic) and cause damage to the van, this is not helped by their physical height which can be too close to the bodywork before I begin.
This is my second set as the first set broke when an unseen stone broke off a section of the ramp when the vans full weight was on it.

rosalan
The above single stars represent nil response, but a response had to be made....

Quattro have 4 levels but not good for large tyres.
The triple is good for latter types.

Had the quatros as i needed the height. Not a lot of choice available.
They are quite large to store.
Have seen many, including mine, where the front of the ramp has broken off, probably caused by driving over them.

Mickp1694
Totally agree with this review,but tyres have damaged the ramps slightly.

Wheel cut outs are far to small to accomodate the wheels... hence difficult to locate .., However the best are Mikeco 3 . Not perfect but better .
Seemingly the designers are NOT motorhomers but .... Ok if ya have 12" diameter cart/ buggy.

We purchased a set of Millenco 'triple' levelling ramps in early 2010. We chose them for the good height they could lift the wheels; not too heavy and not too bulky. They came in a well made and handy carrying bag. The design of having three levels / steps facilitates driving up to the required level - you can feel as you go. However, I normally have an observer just to double check I don't drive over the top.

As an aside, we considered the Millenco 'quatro' ramps for even more lift, but decided they were too big, bulky and heavy for us to carry around.

We have used the triple level ramps regularly from new without any problems whatsoever. They have been given a reasonably hard life, having been placed on lots of different types of surface. We have used them with three different vans, all 3,500kg. The ramps and storage bag remain in perfect condition.

In summary, have no hesitation giving them an excellent 5-star rating.

We had a pair and got rid of them.
Hubby drives etc I do the ramps and I hated to see our new tyres sitting on those hard sharp ramps also you seem to see quite a few with bits broken!
We have a pair of the larger Fiamma ones now-much better!

These get a good height and don't sink like the Fiamma ones do, but the designer used the wheel from a wheelbarrow when they made the cutouts, they are just too small and you end up with a the sharp bits digging in your tyres. Sold mine.