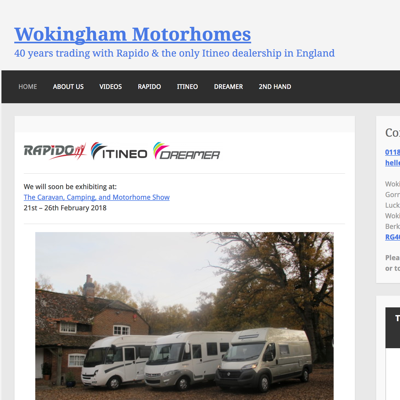 Wokingham Motorhomes is based in Wokingham, Berkshire. We specialise in selling and modifying Rapido Motorhomes for the UK market and our staff offer quality and reliable customer support and service you can count on. In addition, our friendly and professional staff are here to answer any questions you may have about our company or our services.

Rapido Motorhomes has a large customer base from all over the UK. Originally we sold extending folding caravans from 1976 and onwards. Then came the pop-up caravans, and finally we switched to full time production of motorhomes, building on the Renault chassis cab with pop-up roof, later moving onto rigid roofs. We have always specialised in A-class technology.

Whether you need a motorhome for personal use or are a commercial agent, we have what you need at prices you can afford. At Wokingham Motorhomes, our goal is to provide you with prompt, polite, professional service of a high calibre. We sell directly to the consumer from our premises in Wokingham and always welcome part exchanges.

Whilst at NEC show in February we met the owner who was very helpful despite being busy.
Paid nominal deposit on new m/h he had at his yard subject to a trial drive and viewing.
We're welcomed warmly and left to view the van in peace. Supplied tea, biscuits and even lunch!
Deal was done and arranged extras to be fitted and deposit paid, collection date sorted.
Due date arrived, van outside, prepped and almost ready to go. Thorough handover, balance paid ,paperwork sorted, even personal plate no problem. Staff v.helpful.now just one brother running whole show with occasional help from wife and son. Jane- admin- very helpful &a polite.
Had a small screw cover go missing on return home, spare sent within the week after call to Jane. Month later lost rear marker light lens and once again after e-mailing photo to Jane spare arrived promptly.
Whilst not the glossy, pushy ultra professional dealer most seem to be these day we quite enjoy the quirky and personal service provided.
Just arranged for the first habitation service in 2018 before going to Europe, so expect to be offered overnight camping there as before.

We were please with the initial experience when we looked at a used MH just what we were looking for, and asked for a couple of things to be added which they did quite happily for the marked price (in 2011). It also had a load of bits and bobs inside which we thought were supposed to come with the MH.
We collected two weeks later as noticed all the bits and bobs were on one side of a shed and asked if that was ours were told yes and almost immediately someone else said no (oh well never mind I thought).
Took it out for our first trip OK, but noticed a strange noise from the engine, now not being a diesel person I was not sure so rang the dealer and arranged to bring it down. They looked at it and stated it need to go to a dealer which I did, to which I was told it needed striping down to find problem, upon phoning dealer was told to bring it back and they would take it to their repairer.
I delivered the MH to them with the proviso that I get it back by a certain (reasonable) date, our Anniversary for which we had arranged a trip.
After a bit of toing and froing we did get it back in time all fixed (Cam shaft tensioner changed, thanks).
Everything after that was problem free, but like the other review trying to find out small bits of info or parts, they never ring back or reply to emails, they even missed out on a sale to a friend of mine who wanted a small Rapido and left emails etc and never got a reply so bought from else where.
The business as I understand is run by three brothers and you do get a different response from each, they also could do with more staff to reply to inquires !

We bought our current Rapido from Wokingham in 2014.

They aren't a traditional dealer as such and don't have a showroom or forecourt. Viewing is by appointment. Nothing wrong with that though. They are based on a farm just outside the town.

Wokingham are very knowledgeable about their product as you would expect from someone who has been a Rapido dealer for many years.

We turned up to see what they had with the intention of ordering a new van. We were greeted and looked after very well and given the tour and a good demo of the several vans they had.

It was explained to us from the start that the Rapido's order book for 2014 had closed by that point so we would be ordering for a mid 2015 delivery which wasn't what we wanted. At this point we were in a highly specced demonstrator so I said what about this one then to which the reply was yes, you can have this one if you want and I can sort you out a really good price which he then proceeded to do throwing in the usual extras. All good up to this point and we shook hands on the deal.

Registration went smoothly and we turned up on the agreed day a couple of weeks later to collect the van. The handover was very thorough and detailed and I drove away happy.

This is where the tone of the review changes.

A few weeks later I had cause to ring them about something very minor, I forget exactly what, and after it taking the best part of a day to speak to someone they were very abrupt and unhelpful. I didn't think any more of it.

A little while after that we had a very minor warranty issue - a little weep on the shower mixer - so I tried to contact them both by phone and email. When someone answered the phone I was told the person I needed to speak to wasn't there and would call me back. Never happened and they never answered any emails. After a couple of weeks of this I eventually went to another dealer who happily sorted the issue out for me.

I continued to email them occasionally about the first minor thing but never had a reply.

Some time later we had another issue when our keys were stolen. I contacted them to try and get a replacement hab key and a new lockset. After the now traditional delay I finally managed to speak to someone, explained the problem, explained that I would be paying for it rather and quite frankly he wasn't interested in helping. I got a vague oh I'll have to look into it and get back to you. Guess what? Never heard a word from them since. I didn't have time to mess around so I went to the other dealer who helped me before and was sorted within 24 hours.

I suppose in summary I'd have to say that they were fantastic up to handover and then terrible afterwards. The impression I ended up with was that once they had their sale that was all they wanted.

We wouldn't use them again and I'd hesitate to recommend them to anyone.