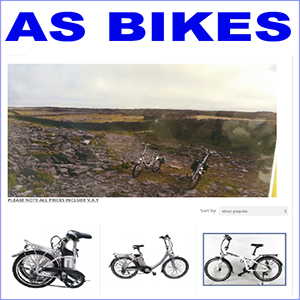 About electric bikes and ourselves

Cycling is a favorite past time of many and if you enjoy caravan/boat or motorhome holidays you know the shops are always a few miles away. With an electrically assisted bicycle the hills are a breeze while you get fitter than you could imagine. Cheaper to run than most alternatives at only a few pence to charge the battery.

The Electrobike puts all the fun back into cycling without any downside. Many of our customers are seniors who see this type of exercise as an ideal way to keep all the joints mobile or to strengthen arthritic or poorly knees without ever pushing themselves too hard and the frame entry point is very low to help this.
While it wont propel you up a hill unassisted the effort required is made minimal. All electric bikes are strictly governed by E.E.C regulations on motor size and they must be able to be pedal assisted which is why you see electric scooters with pedals. The electric power must also be cut off if you go over the 15mph limit but you can carry on to pedal past this. If these regulations are met you don’t pay tax, Insurance and no MOT or license is required.

We have been around for over 14 years now and have all parts you will ever need and a technical backup that is second to none. Everything on our bikes has been thoroughly thought out so they are fully adjustable to fit your body shape. You can move the handlebars backwards or forwards or even replace them with a shape that suits you. The seat is adjustable to enable you to move the saddle backwards and forwards and this means if your shorter you can touch the ground and be near the bars while if you are tall you can move the bars further away and your knees wont be close.

Having been in business for over 14 years we know exactly how to make you feel comfortable and haven't yet found a challenge we couldn't solve. We are excellent mechanics available to help keep your bike running smoothly having previously run a speedway motorbike shop for 13 years and a large village garage for 10 years. We are a family based business and we pride ourselves on being able to offer you the best after sales service. We have been around a long time now and this is important as we see new companies arrive every year full of promises and special offers and they nearly all go out of business within a very short time. You then find yourself left with a bike which has no spares or service. We spend no money on advertising because our customers become our advertising. If you are at a Motorhome show you will see hundreds of people on our bikes please stop anyone and ask them if they are happy and what our service is like. We do our very best to give you old fashioned service that’s long disappeared because each of our customers is our best chance of another sale in the future.
Share:
Facebook Twitter Pinterest WhatsApp Email Share Link

AS bikes saves the day at Peterborough
I use my old Electrobike while marshalling as I am challenged walking. So turn up at Peterborough get the bike out... No key? AHH!

Went to see the lovely people at AS bikes who were still unloading the van. With no hassle at all, replaced lock and key with a used unit so getting me going. Free! Flatly refused to take anything for his trouble and for a bike that must be five years old.

Jaws
About the best there is as far as bikes go.. Peter even arranged to send replacement seat stems out to Zahora to us when some scrote nicked ours
We bought two bikes from Pete of AS bikes at Peterborough a while back. When we couldn't decide he said there are two bikes take them for a ride, as far as you like, didn't take our names or anything. After buying them Judy found the handlebars a bit high so Pete sent a new shorter stem to our home in France, free of charge. The bikes were great took us everywhere we wanted to go, charged easily with our non sine wave inverter. When parts of Spain started to get a bit funny about them Pete gave us a CofC and some stickers even though we had bought them a couple of years earlier. Sadly we finally decided to sell them to get a scooter and Samantha, Pete's daughter advised us what they were worth to be fair to the buyers just in case they would soon need new batteries and even said they would display a card on their stand at Peteborough to help us sell them and would not charge commission (how fair is that? When they could lose a new sale as a result). As it happened we sold them before via classifieds on this site and the Funster who bought them as far as I know is delighted.
If I wanted to buy electric bikes again I would certainly use AS bikes. A fantastic company to buy from with unlimited after sales service. You will notice that they never advertise, they don't need to, their customers are their advertising. I have never met anybody who was dissatisfied with their AS electric bike. Ours were folding shoppers ideal for the Motorhome and easily fitted into the garage. Am happy to answer any questions on here or by p.m. I have no connection with AS bikes other than as a very, very satisfied customer.
Steve

2 members found this helpful.
Likewise we bought 2 used ones in September which we were aware needed new batteries and on advice from AS we purchased new battery's and chargers from their recommended suppliers.
We have now done about 100kms on bikes and are very pleased with the handling and performance on and off road.

rosalan
I have had several dealings with Peter and his lovely family over the last 10 years and several of his bikes. If only all dealers, of any product, had the same attitude towards their product, giving total support if you speak politely to him.
Constantly updating his product, I cannot imagine having bikes from anyone else.
Read more…