More news from The Spoof.com

Forest City, Iowa: Winnebago Industries will introduce a brand-new line of recreation vehicles for small people. The line is scheduled to debut at the Indianapolis 'RV Supershow' next March.

"We need to re-tool our corporate image," said Winnebago. "Since the late 50's we have been building huge, fuel-guzzling behemoths, and each year they seem to have gotten larger and more fuel hungry. Besides nearly pricing ourselves out of the market we have also gotten a reputation as terrible corporate citizens. Now, we aim to change all that."

Winnebago say the new line will first target the troll and midget market. The new models are only four feet high standing at the curb. 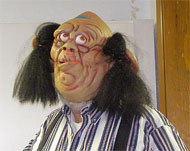 "And, only trolls or midgets will be able to walk upright in them," they say. "But, we figure once we get a few units on the road other people will begin clamoring for them. To that end, we will also be introducing a 'regular-person prophylactic' which is essentially a personal tube creating an 'access interface' to the interior of the RV for normal sized people.

"Of course they will not be able to stand, but will be able to sit in a few areas of the new RV's. Sleeping of course will not be a problem. We are still working on the shower and sitting-on-the-toilet issues."

The new RV's should achieve about 60% better fuel economy because of the vastly reduced windage and weight parameters said Olson. An option will be an air-cooled 'mini-diesel' rated at 17 HP. "They will pretty much have zilch for performance, but ought to get our RV's lot's of attention, even if it's just people swearing at them. That's basically free publicity you know."

"The new line will also be a major step in achieving our current 'downsizing' plans," they remarked.

The story above is a satire or parody. It is entirely fictitious.
L