FOR SALE What is this van worth? 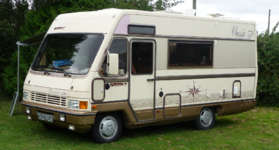 Assuming I wanted it. It would take a lot of haggling, for me to pay more than 3K. I sold a similar age "premium" range topping (in it`s day) R-V near 10 years ago now for 10K. Absolute Mint interior, fully UK compliant, with bell and whistles. Old(er) classic campers are a very "niche" market. People pay inflated prices for "sheds" in the VW "van" world. There is a Hymer (age unknown) sitting in a HGV storage yard near us, been there some 12 years and never turned a wheel to my knowledge. Rumoured to be asking 5K. I think it will go for scrap, when the elderly owner passes.

It sounds like there's a reasonable consensuses it would be interesting to hear if it gets put on the market!
Looks like it's not in the UK from the background. If so the value has just plummeted!. If there's no mot and its UK registered it's either try to register it in the country it's in or recovery to the UK then start trying to sort it out. If it's already non UK registered get a local mot equivalent then drive over here and go through the process of getting it UK registered and mot.
Last edited: Feb 12, 2020

Essentially someone would like to sell this van. They are an ex member who knows there are people here who like FFBs. He says he hopes to get more than £2k

He is going to send more pictures, when I have them I'll post them with his details.

£2001. Make a great man cave in the garden, for when wife kicks off

Well made vans but I wonder why the owner has no MOT on the van when you consider it only costs about £50 to get done.
Habitable part may be great but it would concern me that it has major chassis problems, brakes, suspension,rot etc.

I tried to tag bryandh Bryan but he is no longer a subscriber but he started the Facebook group for FFB owners,

Jim you might remember him and and his wife from the Marjal rally they came from Scotland but lived in Malaga.

OK if you want this van the guys email is here. savagehenry@ymail.com and his whatsapp here Spain 634311399

The van is in Spain. Guys wife has recently been taken very poorly so he is now a fultime carer. It has nothing to do with me, I'm not on commission, I don't even know why I agreed to help this guy who is not a Funster, I'm just a soft touch.

. Below are a few combined emails.

Can I place an advert on this site. I have an FFB Tabbert, which I would like to go to a good home as I am no longer in a position to use it.

It is left hand drive with a Fiat Ducato chassis/motor.
I originally bought it in Germany. It has a huge amount of paperwork including the original bill of sale and manuals etc. However, after using it for a couple of years I decided to put in a new interior. Just after this my wife became seriously ill. Since then I haven't touched it. It is at my property in Spain. It needs a lot of work, basically a new interior. The bed is still in and working ( drop down) electrics And water and blown air all still in and working. Roof cupboards also still in. I would really like it to go to someone who would appreciate it. It was an ambition of mine to own one of these and do it up in a modern style. Ah well!! It drives very well, has always been serviced, it came from Germany!!! Good tyres, assisted suspension, inboard tanks...fridge.. english registration plate. Sorn declared. I really have no idea of value these days, but I don't expect it is worth a huge amount ¿? It would be nice to see it loved! I'm rather fond of it. It treated my wife and I very well.


Hello,
yes it runs well. A very strong engine. I was impressed with its performance. Although I haven't started it for a while. No it doesn't have an MOT. It hasn't been in the UK for almost three years, I believe. My memory isn't so good these days.! I can get some pictures of the interior tomorrow and will send to you. As for price...well ..anything over £2000 would be great....but I am very out of touch with these things, so would take advice.

Many thanks Henry S. 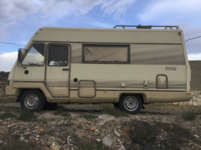 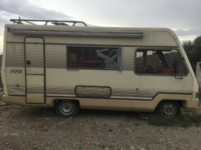 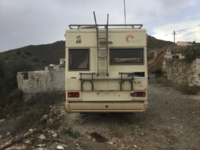 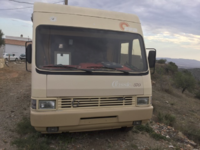 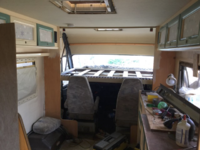 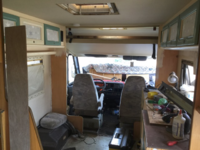 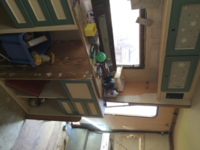 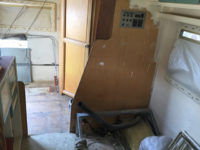 Sorry Jim seeing the state of the interior even £2,000 is a bit strong. Its a shed on wheels, but somebody will buy it as a project at the right price

even i would not take that on it's worth abut £500 spears or repair
bill
Ps EDIT i just sent the picks to my son he recons 1k max as half of it is probably missing it would cost to much in time and material's to fix
Last edited: Thursday at 9:23 PM

TheBig1 said:
Sorry Jim seeing the state of the interior even £2,000 is a bit strong. Its a shed on wheels, but somebody will buy it as a project at the right price
Click to expand...

TheBig1 said:
Sorry Jim seeing the state of the interior even £2,000 is a bit strong. Its a shed on wheels, but somebody will buy it as a project at the right price
Click to expand...

What are you saying sorry to me for?

Jim said:
What are you saying sorry to me for?
Click to expand...

what I meant was ignore my earlier estimate, that was based on a van that was still usable and not knackered

MANGOFORTH said:
Honest confession here. I think 90% of motorhomes are ugly as hell.

I have completely fallen in love with that thing instantly!!

Im only joking. Hands off

Thought you might have a V8 Scania Topline going cheap

After seeing more pictures I think £2k is too much, must be worth a grand to somebody.

if as has been suggested it needs repatriating from spain to get an mot, it would cost more than the value to get it home on a low loader

Will be a liability if left in Spain. I had to pay €200 to scrap a British reg car a couple of years ago.

I will alter my valuation based on the new pictures. I wouldn't touch it with a barge pole.
Value for someone in the uk is £0 in my opinion... Repatriation + reinstatement of the interior + replacement window etc etc would push it over the cost of an equivalent van in the UK by quite a margin.

If someone in Spain wanted it maybe £1,000 if it passed the Spanish version of the MOT?