Walking and Cycling in Spain (1 Viewer)

Hi, I've had a look on here but can't see an answer to this. When walking and cycling we use an iPhone and the OS app in the UK, and the excellent Oudoors IGN maps in France. They both give detailed offline mapping of lanes and paths - just like a paper map - as well as show you where you are. We have Tom Tom of course, but that doesn't give you proper mapping (to be fair it's not designed to, it's to get you from A to B). Google maps and Apple maps are pretty hopeless at that sort of thing, and anyway need a phone signal.

We are going to N Spain in June, and I wondered if any one knew if there was a Spanish equivalent of the OS or IGN GPS offline mapping available for smartphones?

I’ve been using Google maps in Spain on the iPhone but that might not have the detail you are looking for.

windymaps is good for UK and France, I suspect it is the same for Spain.

I back this up with Maps.me which is an all encompassing footpath finder offline gps map. Windymaps is better for the planning

We use the Wikiloc app, but like all apps things can become out of date. I try to pick the most recent routes and check any comments. We mostly get good rides and walks using it though.

AFAIK, there is no equivalent to the O.S system in Spain. This, apparently, goes back to the Franco days where it was illegal for anyone other than the military to own detailed maps. Over the past 10m year, some of the military maps have slowly been released to the public and are available in the UK from a co' in London (sorry can't remember name). I've purchased 2 or 3 for the Costa Blanca area and TBH, they're garbage and not on a patch on our O.S. system The best I've got now (and it really is fantastic) is a Garmin Edge Explore which is superb in detail for both walking and cycling.
B

Some of the maps look like there were done by a teenage art class, others are fairly good, but not a patch on the IGN or OS.

It must be remembered that until the passing of the Franco era in late 1970's details maps were regarded as state secrets, the maps were only available to the military.

So in short, Spanish mapping is a mess.
The best place to get maps (In the UK or Spain!) is to go to Stamfords in Covent Garden in London.
They will have a selection of what you need, but dont expect to be able to get maps that join up, or are to the same scale, or that have been updated.

Just had a look on windymaps and it does Spain. Contours visible

We use Wikiloc. It's been brilliant and we've done some stunning rides and walks and we can send the route to our garmin or use it on the phone but that uses a lot of battery power.
B

The "Spain Topo Map" app is the closest thing we could find to Spanish OS style mapping. Free with discreet ads in bottom bar, works fine with an Android phone or tablet. Don't know if also available for iOS. Scaleable and with GPS positioning. We used it last October and November for waking all over spain including in the Picos.

Screenshot attached as to what it looks like using the 1:25,000 scale mapping. Not as good as GB OS mapping, but very usable. The App itself was very slick and responsive to use.

We have only been one but used wiikilok then, however we have started outdooractive for OS mapping in the UK and they seem to have a good map of Spain. If your OS maps are near expiry it might be worth changing to Outdooractive, its about the same coat and the functionality is good from what we have seen. We are hoping to get to Spain in March and will be using a combination of both. 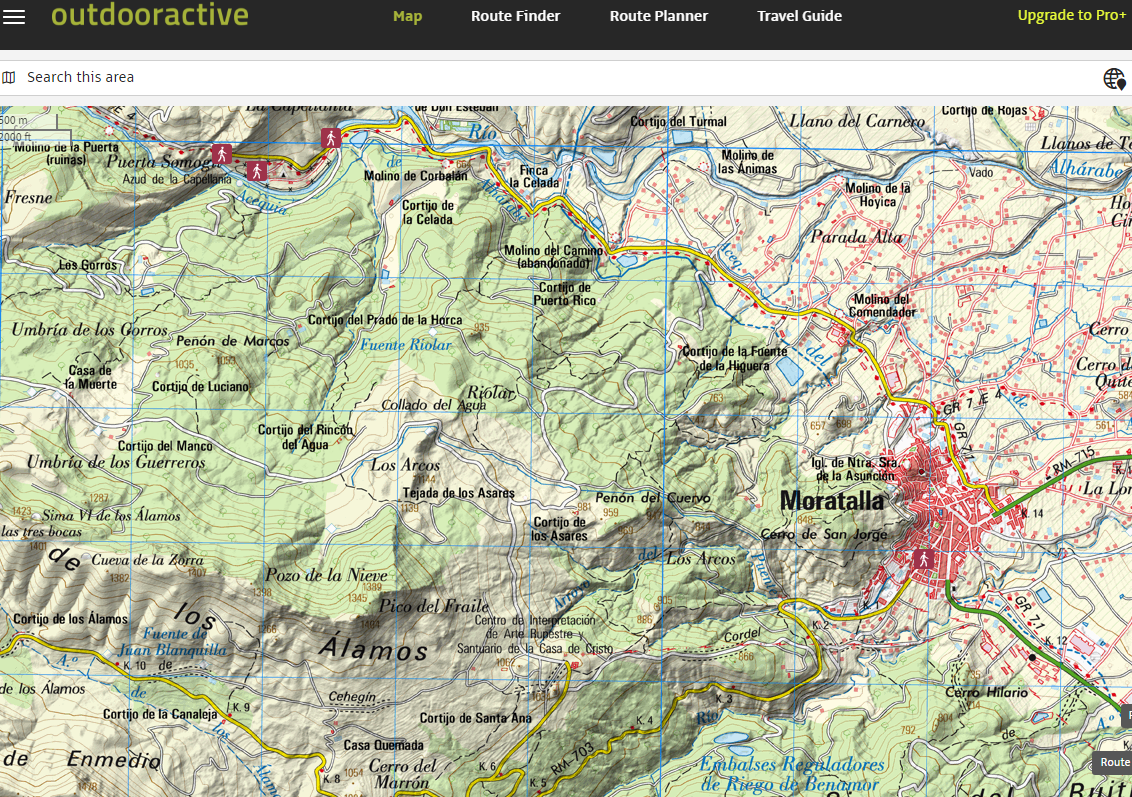 Like others have already said...Wikiloc is a fairly useful App...but if used solely as a means to follow routes made by other members you might encounter a few hiccups along the way.....any mistakes made and not corrected could lead you to make the same..be mindful of this...other than this it remains a very useful tool.
We have a mapping agency in the Murcia region that produce good maps for this area..

Looks like the Outdooractive mapping mentioned by Prop is the same as used in Spain Topo Maps.

Spain Topo Maps is free (with ads) from the Google Play store.

we use a couple of apps for travel/walks and bikes.
Maps.me is great for our road travels as you can on your iPad place POI s on the map and then choose your route.
For walking we use GURU maps this works great as we track all our walks/rides , we can also swop the POI s with each platform.
The problem with recording where you walk/bike is when you go into shops buildings or stop for a longish time, as it tends to bounce the signal and can add to the distance traveled.
The image is a screen shot from the Guru app, near Loule , Portugal.

We use Alltrails just download the app, you can pay a little bit extra for it to send you a text if you go off track and it will divert you back on the right track. You can send a link to friends and they can follow you on it. First time Steve used it I Pmsl as he was just going round in the same circle for most of the walk. That's why I sent him on his own the first time to try it out

+1 re the comment above regarding mapping here. We tried using the military ones for clients but the quality of the mapping is not good, and they lack the kind if details and scales needed for hiking or mtbing. Your best bet is to go to local tourist offices or the ayuntamiento (town hall) and see if there is a local product detailing routes. If you can find one for the area you will be in the Charles Davis books and accompanying waterproof map are, however, absolutely superb. Amazon product

I use Komoot too, it's good for route planning, however it's not over popular in Spain compared with Wikiloc...

jumar said:
I use Komoot too, it's good for route planning, however it's not over popular in Spain compared with Wikiloc...
Click to expand...

Beat me to it! Komoot for us as well

Prop said:
We have only been one but used wiikilok then, however we have started outdooractive for OS mapping in the UK and they seem to have a good map of Spain. If your OS maps are near expiry it might be worth changing to Outdooractive, its about the same coat and the functionality is good from what we have seen. We are hoping to get to Spain in March and will be using a combination of both.
View attachment 584055
Click to expand...

I have os map subscription but now we are spending most of our non working time in Spain we hardly ever use it so will look at switching. Does this have similar features/usability to the os app? I love the flyby feature on os maps.