Big thanks in advance :thumb:

3300kg is not a heavy vehicle and I am pretty sure that the new rules in Spain just treat a motorhome of this weight like a car.

In Practice I have toured france spain and many others with a 3500kg van, carefully stuck to normal speed limits and restrictions and never had a problem.

It can be different over 3500 where different rules apply in many places.

A couple of thoughts. If you have a bike rack then you need the square plates on the back.

And it is wise not to exceed 3300kg if that is your vans MGW - perhaps worth a check on a weighbridge before you go to make sure.
OP

we do have a bike rack fitted but no bikes - instead we have a Fiamma Ultra 500 box fitted to the rack - will this make any difference ? 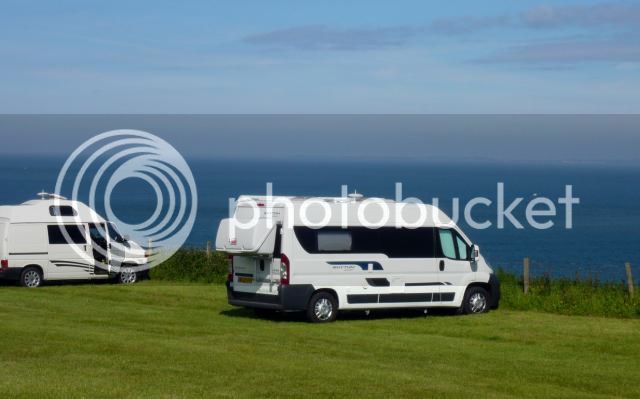 That reminds me.. gonna have to get a GO box for Austria this time out

Speed limits in Spain for your weight of motorhome are the same as cars. Might be an idea to get a diagonally striped marker for the rear of your box (can't remember the 'technical name').

Exp
since 2007 caravan before that

I am going Friday morning 7 am, we are on the tunnel. where you heading?

My motorhome is 4000 kgs gross. I ensure I am never over weight. other than that I don't worry and never had an issue ( other than avoiding tolls as they cost more). We do often see signs indicating no entry to 3.5 ton and we try not to disobey these, however sometimes I find I am already in the zone and look around and see other vehicles that are over 3.5. One very good example of this is St Vallery en Caux aire which has a 3.5 limit on the access road and is often full of campers , many which are over 3.5. yet there is no other entrance to this aire? as your under 3.5 ton you don't have an issue as long as your not over weight.

Regarding the red and white striped sign for the bikes, I have this on with my cover, but often don't use it when driving from site to site. I thought it was only law to use this sign in Italy and considered best practise elsewhere. I have seen other vans, French and others not using the signs.

My experience driving in France is that its very much more relaxed than the UK apart from large cities where the traffic builds up. Roads I use are generally very light on traffic. best time to move is between 12 and 2 when the French are having dinner. However after a few days we have generally given up following the plans and have started tuning into French time.....so nothing happens in a hurry....

One sign to be aware of are the no overtaking and speed signs that show a car and 3.5t....

They have the same sign with a truck pictures, hence meaning no goods vehicles over 3.5t. (3500kg). However if it shows a car and 3.5t I take it as meaning no vehicles at all over that weight.. Motorhomes included.. The N10 on the Western route in France on route to Spain has several areas where this sign applies. So be cautious...
OP

laser101uk said:
I am going Friday morning 7 am, we are on the tunnel. where you heading?

We are actually setting out Thursday evening and stopping over night maybe on the car park services at Euro tunnel, our crossing time is set for about 8:30 Friday morning :thumb: heading from Calais to Le Havre/St Malo/Dinan/La Rochelle/Bordeaux/Dune du Pilat - Spain... some of the named places i dont think we have been through before so if any are a little iffy do let me know

any projection beyond the rear of a vehicle should have the red/white chevron plate on it.
spain has just introduced draconian new speeding legislation (handy that being the height of the tourist season) which has a zero tolerance and scarey fines (£400 iirc)
best to keep 5kmh under the limit

where can you buy red/white chevron tape ? I could make a triangle out of some an fix it the the fiamma box - would that be ok ?

Exp
since 2007 caravan before that

sadlonelygit said:
any projection beyond the rear of a vehicle should have the red/white chevron plate on it.
Click to expand...


Is this law, or is it just a 'should have'? Am I wrong in understanding that it is only law in Italy and , whilst recommended, is not law in France?

spain and italy it's law
50x50cm square
fiamma do a specific doobrey.