We have just returned from a week up in Scotland. Not been on EHU at all and F/F was fine up until day 6 when we noticed that the fridge wasn't cool and freezer was defrosting.

There were no warnings lights showing and the flue was just warm.

When we got home, hooked up ehu, turned off gas, AES kicked in, 240v chosen and within an hour both fridge and freezer were at required temperature.

Bottom vent is opened by a single slide on left hand side pushed upwards.. 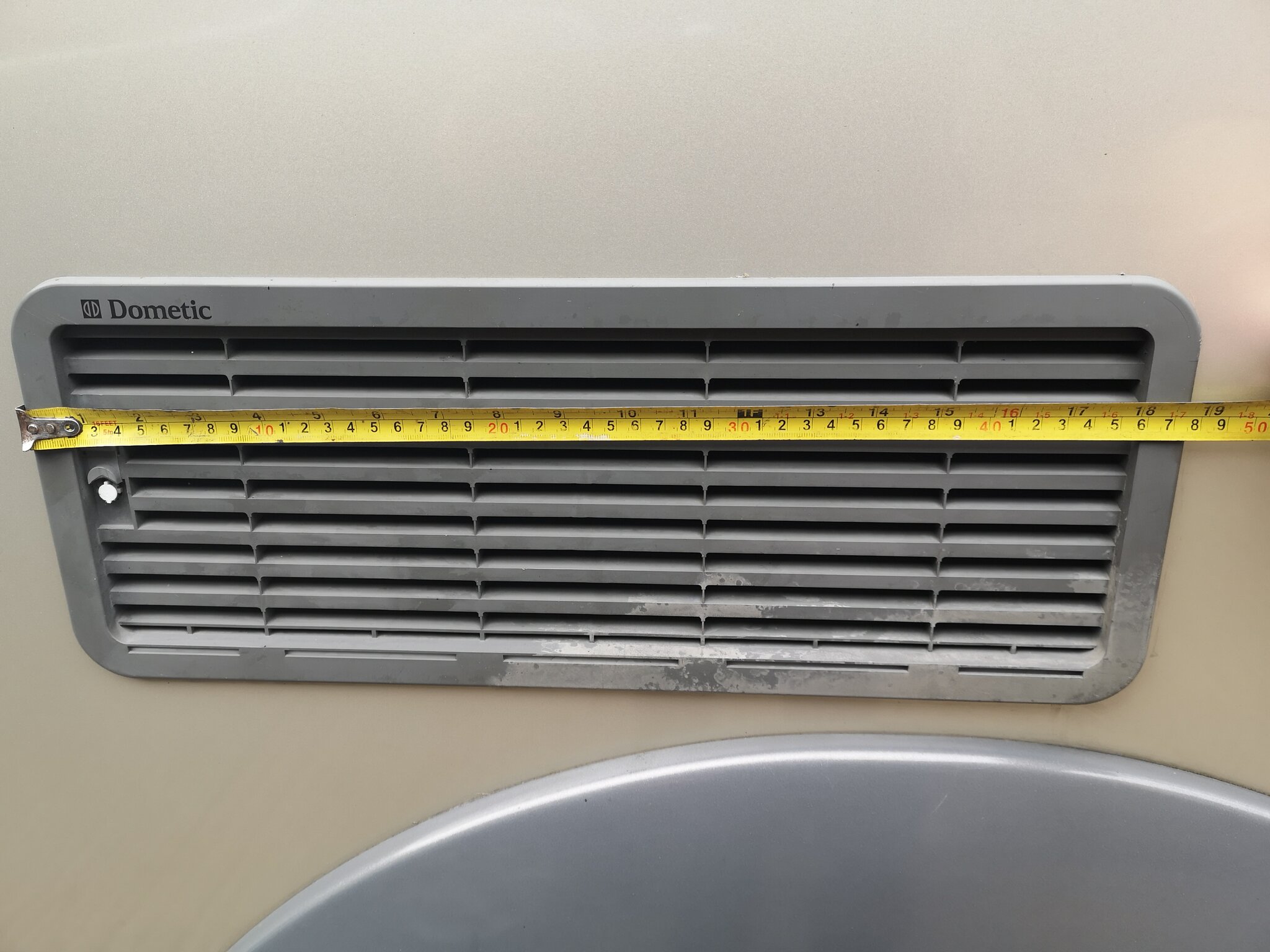 Once catch is released, ease out left hand side of vent and pull away from hidden locating lugs on right hand side.

This reveals the gubbins!

I find it easier to remove the 12 stainless self tappers and remove the frame. Those of a more dexterous persuasion and smaller hands may manage without!!

The burner is located above the label on the rhs.

Top vent is removed by turning the two buttons on the lhs through 90°, easing it out and again sliding to the left to release the hidden locating lugs... 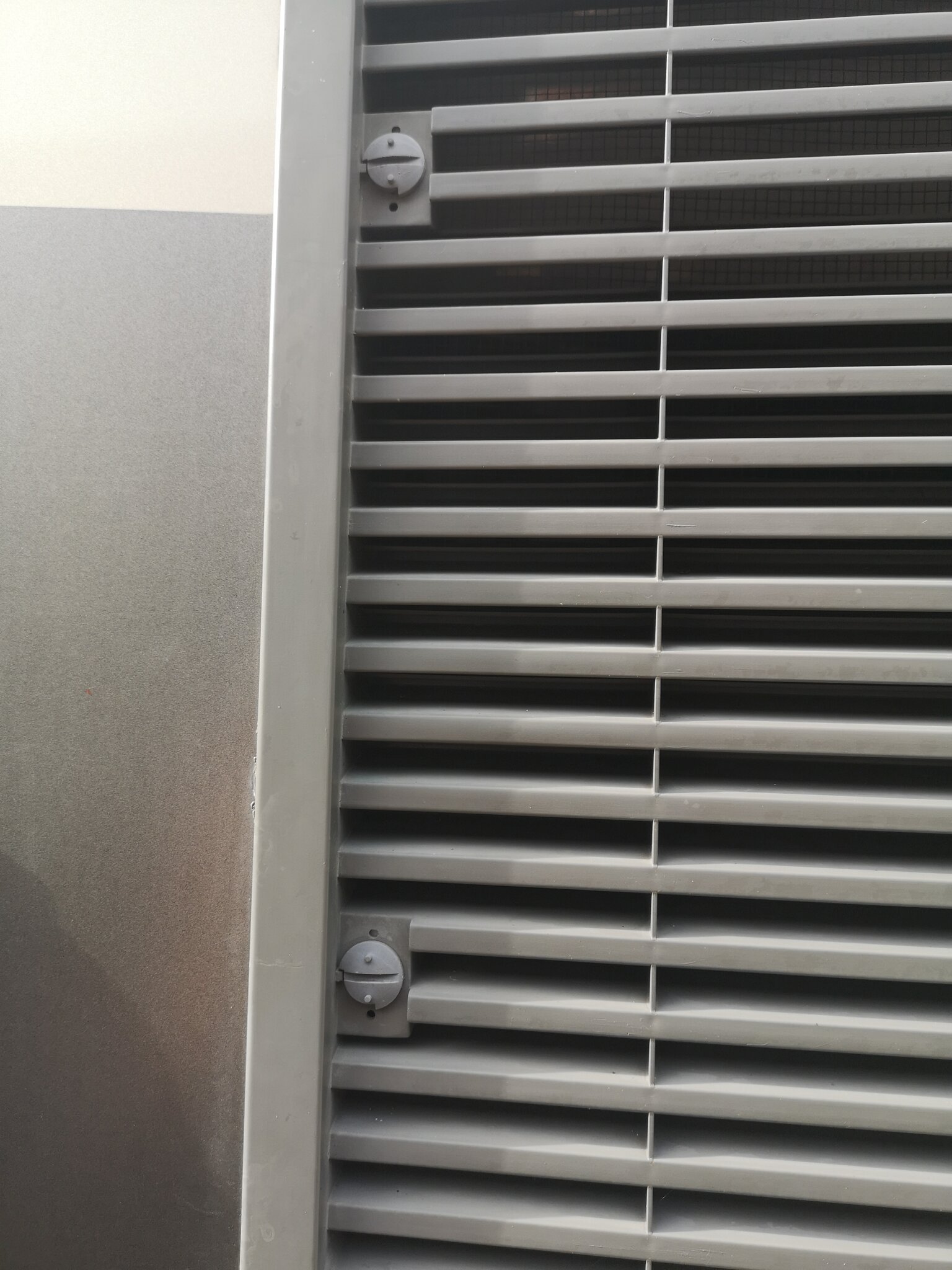 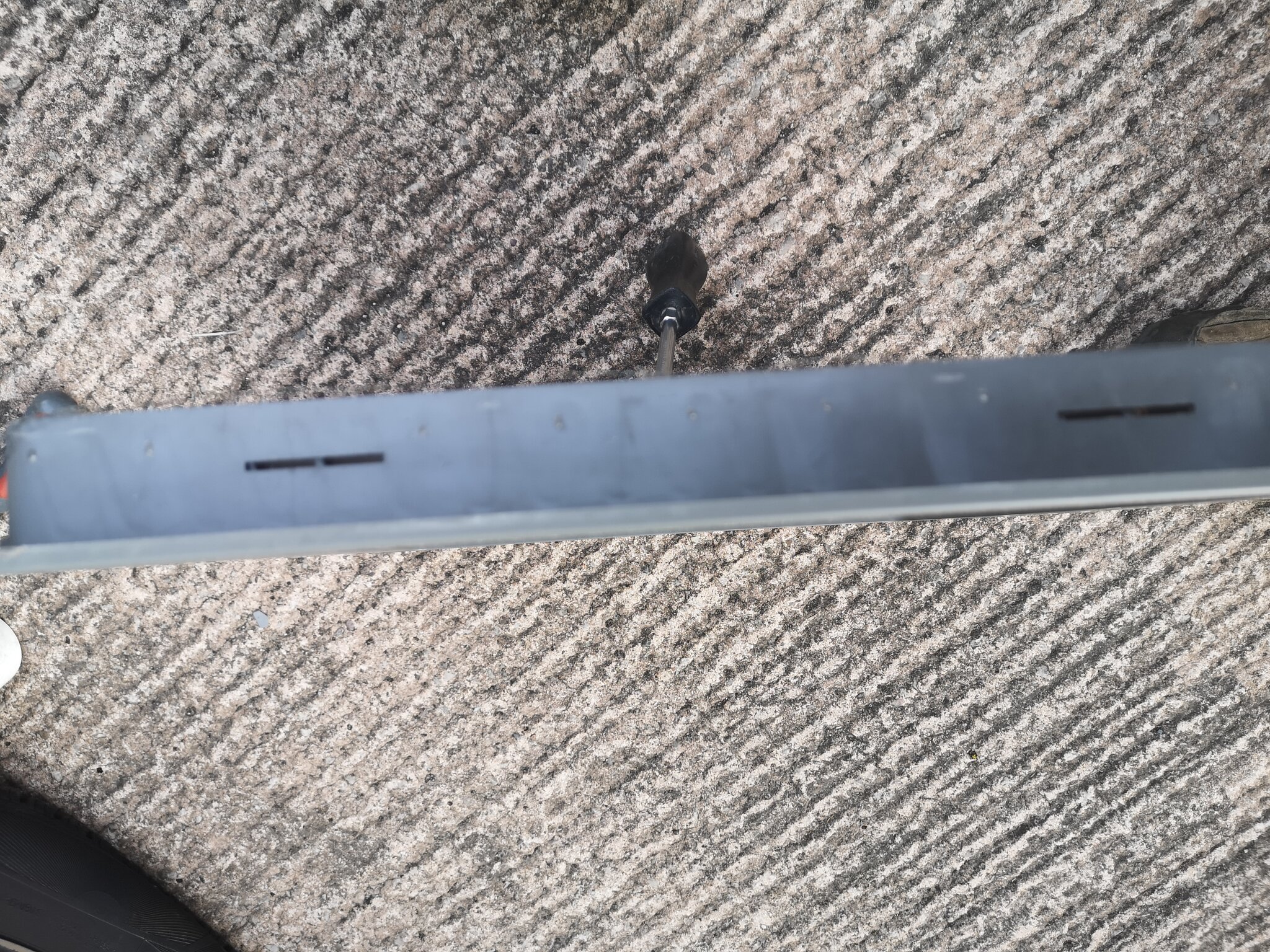 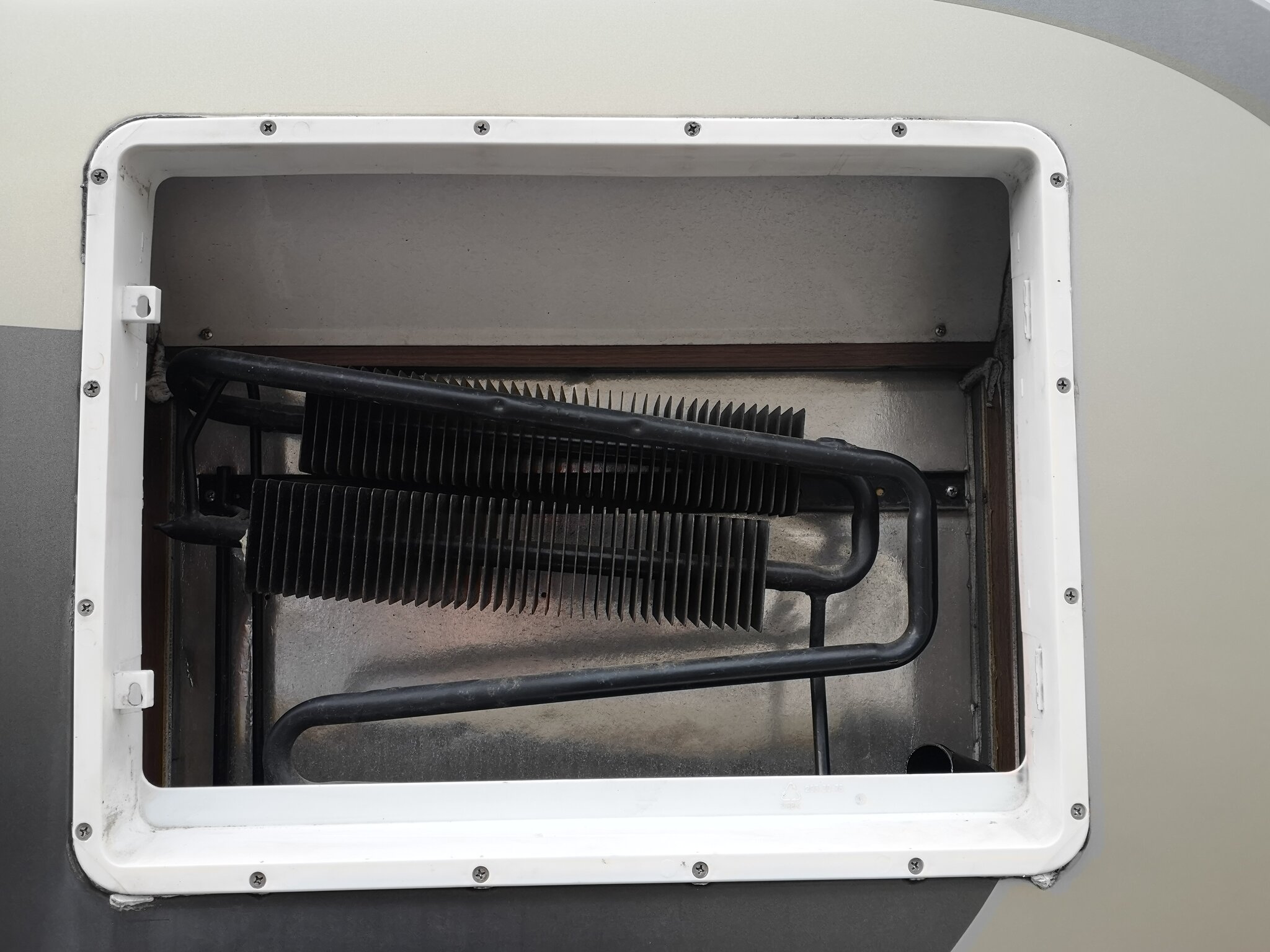 The flue exhaust can just be seen at bottom rhs.
Again I found it slightly easier access by removing the 16 stainless self tappers and taking the frame out.


At the bottom opening, the burner is covered by a draught guard which needs removing. It is held in place by one screw.. 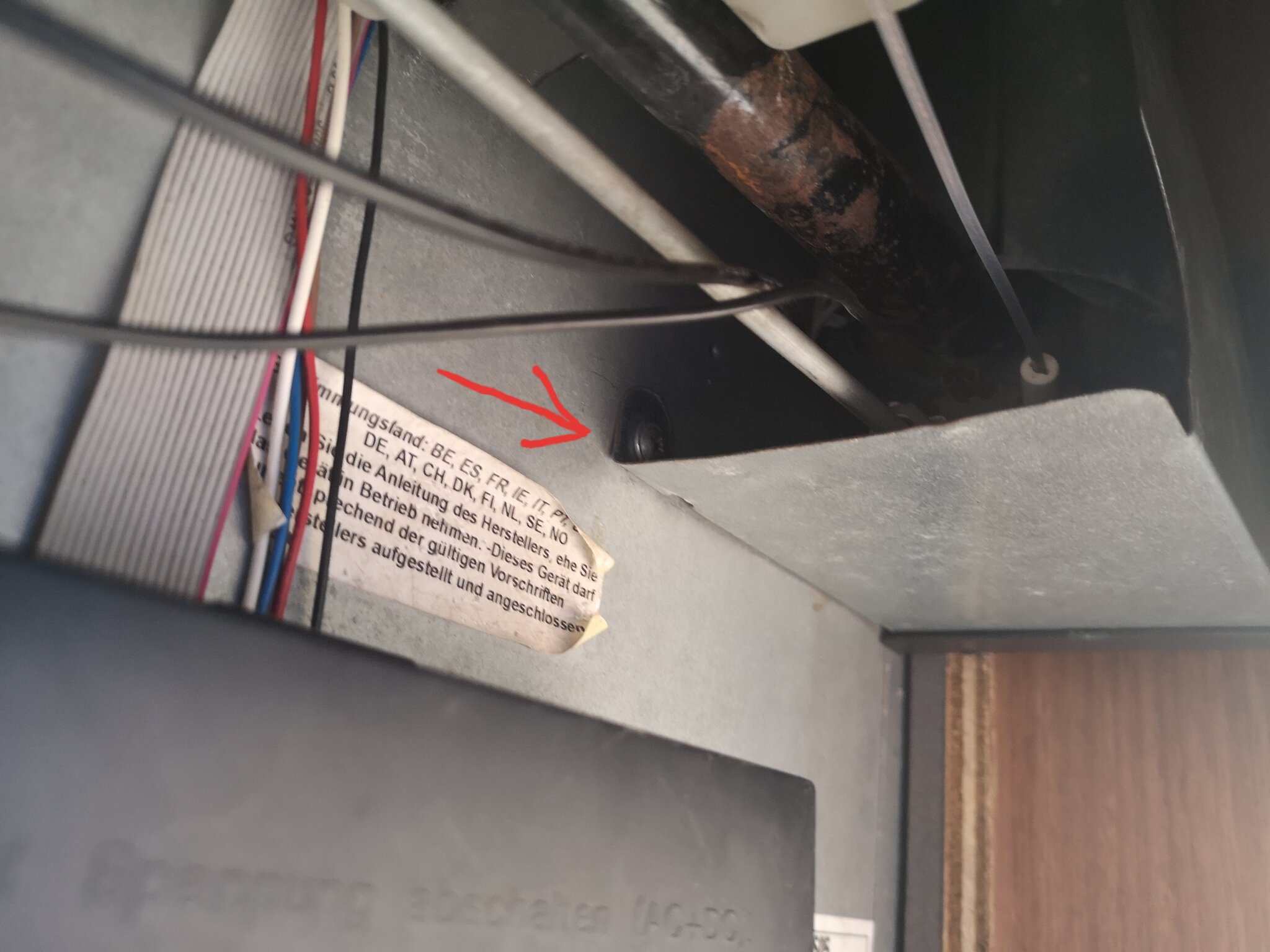 The dome head philips screw isn't the easiest access but the draught guard has a crescent shaped cutout opposite the tab that locates on the screw.. 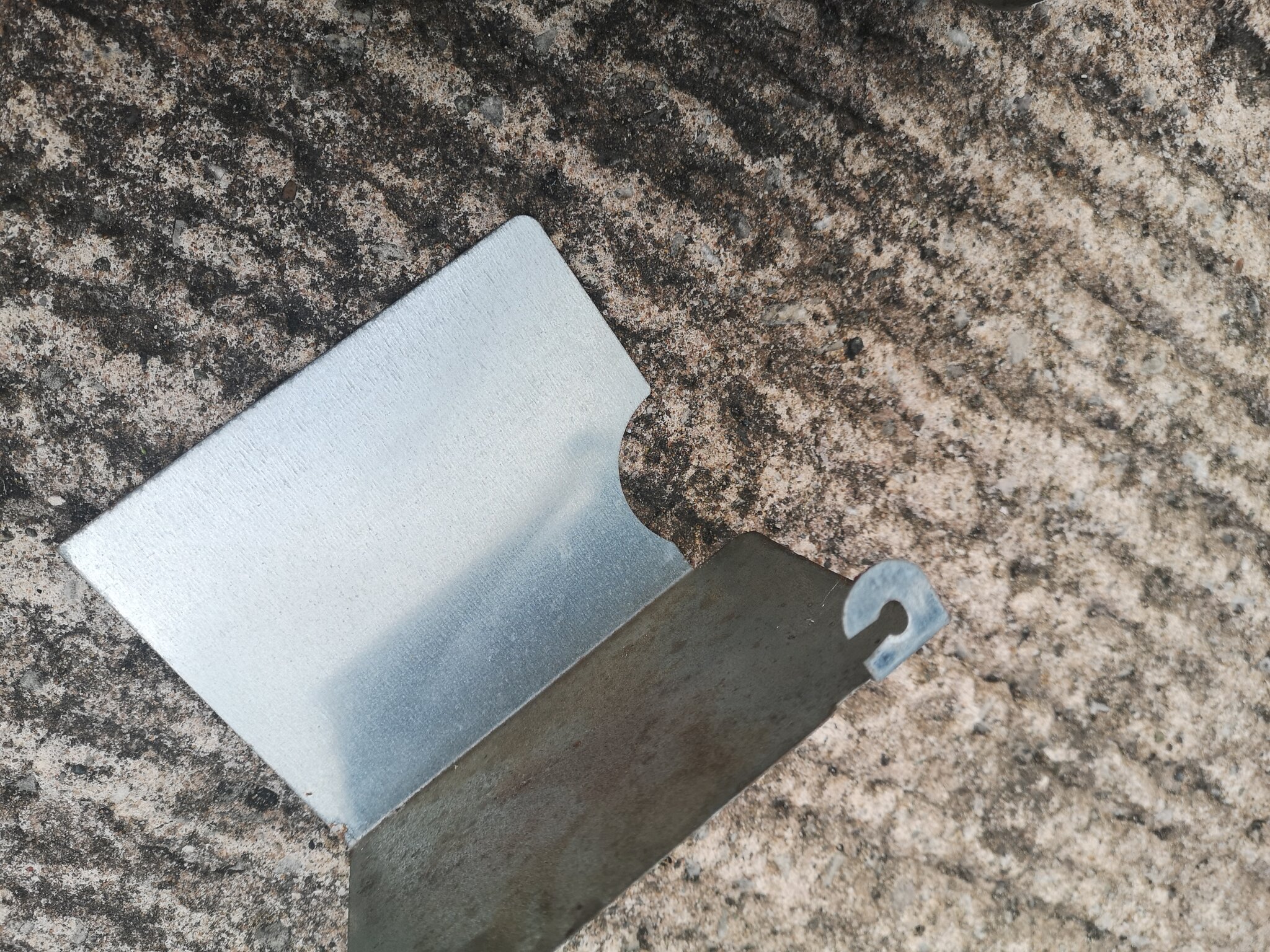 I sacrificed an old Philips screwdriver by cutting it to the correct length to fit into the distance between the screw head, through the cutout, and against the inside wall of the MH. This gave me straight access on the screw head and with the aid of molegrips locked on to the end of the adapted screwdriver shaft, was able to turn the screw a couple of turns to allow the draught guard to slide out to the left.

I now had access to the burner mechanism (pictured from below) 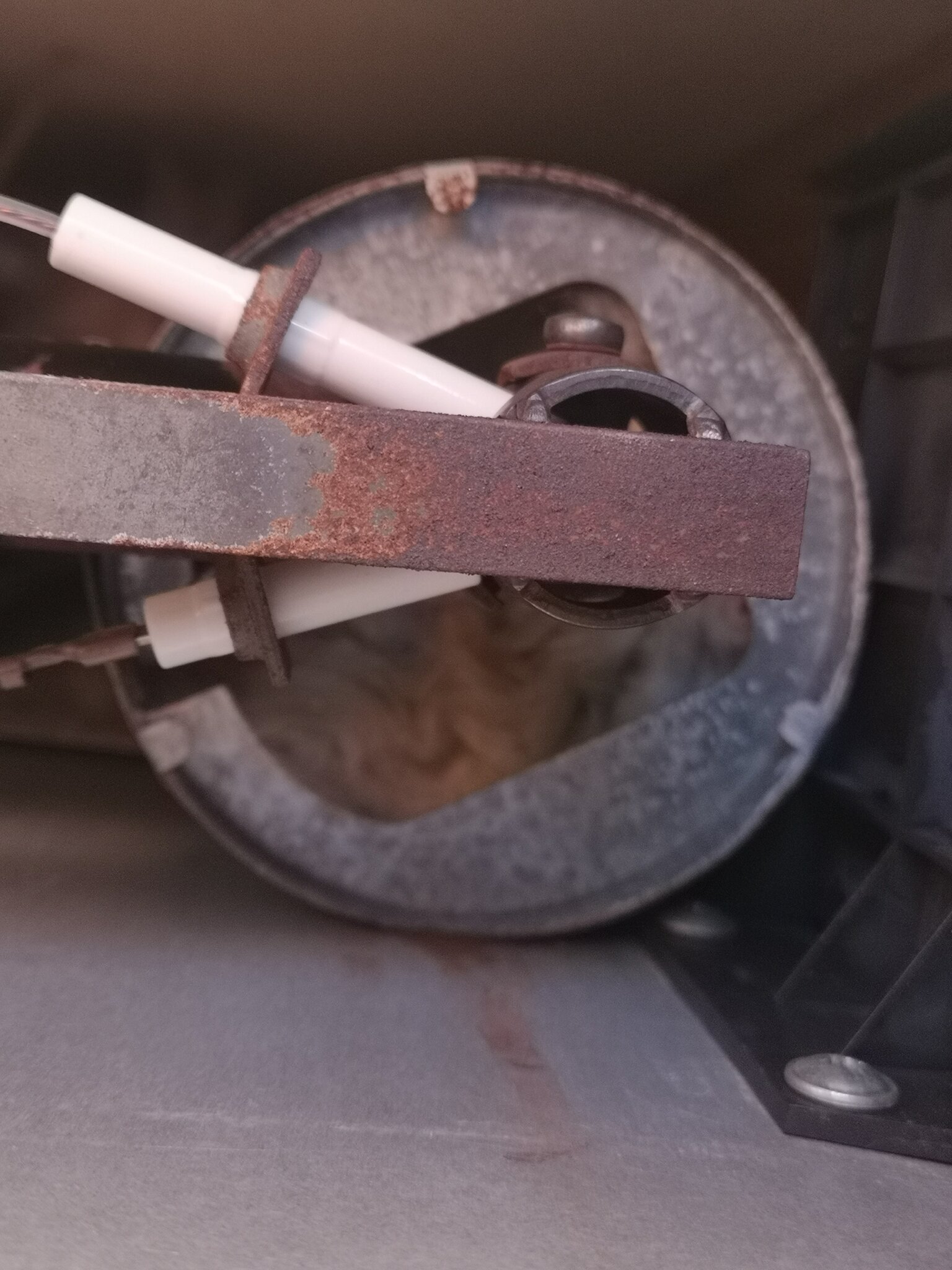 The end-on picture of the steel tubing, partly obscured by the rusty burner box is the exhaust flue. The two white ceramic pieces are the igniter and thermocouple. You can't see it on the rhs of the burner box but there is an air hole that will be used later to blow out and debris from the burner.

Back to the top opening..

There is a T piece that sits on top of the flue that directs the gases towards the vent. This needs to be removed to allow cleaning of the flue. This is held in place again by a single dome head Philips screw. This fits through a clearance hole in the T piece and into a threaded hole in the flue tube. Access is again a problem. 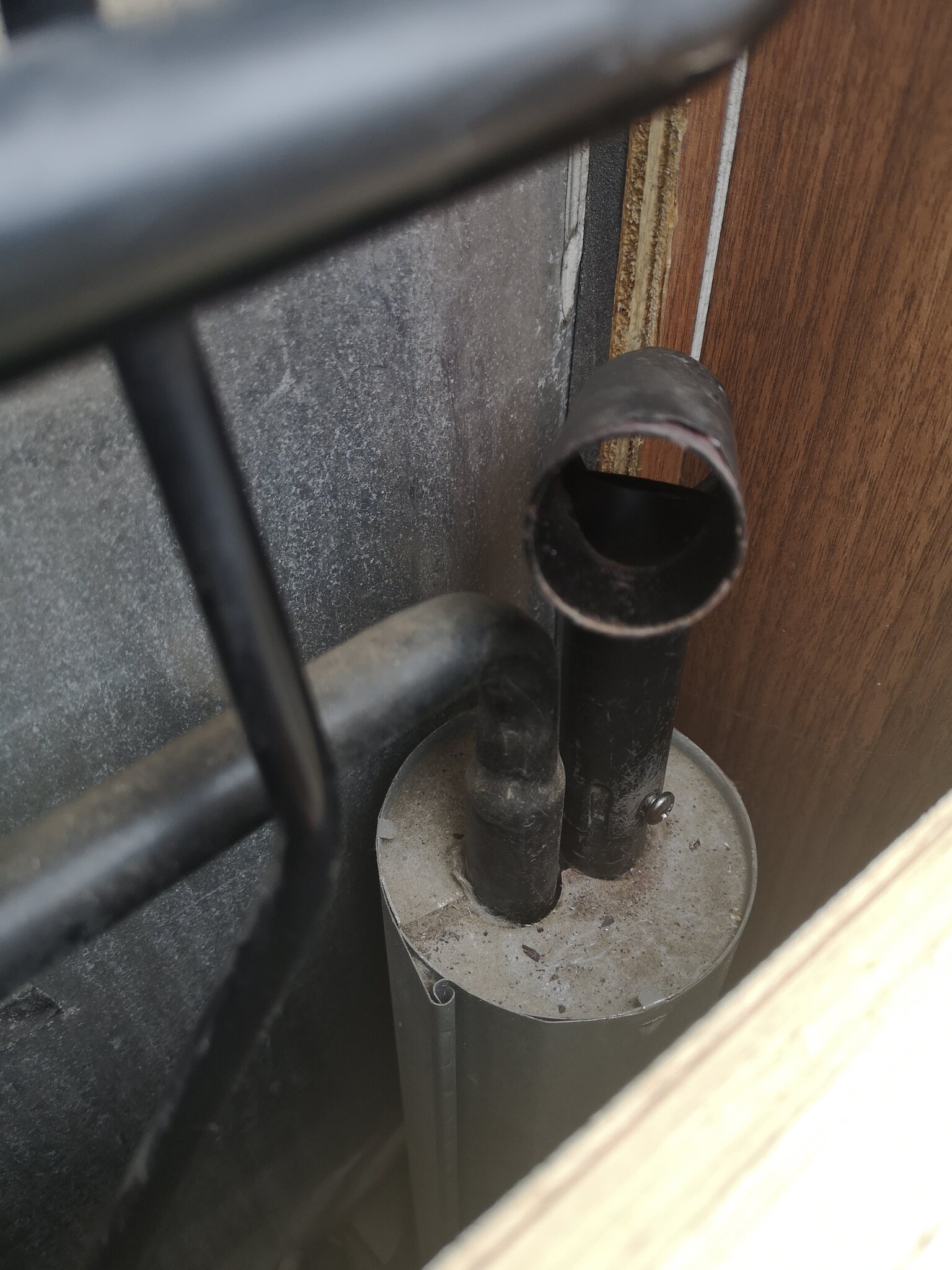 I made a tool using a Philip's screwdriver bit and a piece of flat steel bar. I drilled a 5mm hole at either end of the flat bar. I drove the
Philips bit into one hole so that the hex shank gripped the sides of the hole and tied a length of paracord to the other in the real eventuality that I dropped the tool down the back of the fridge! 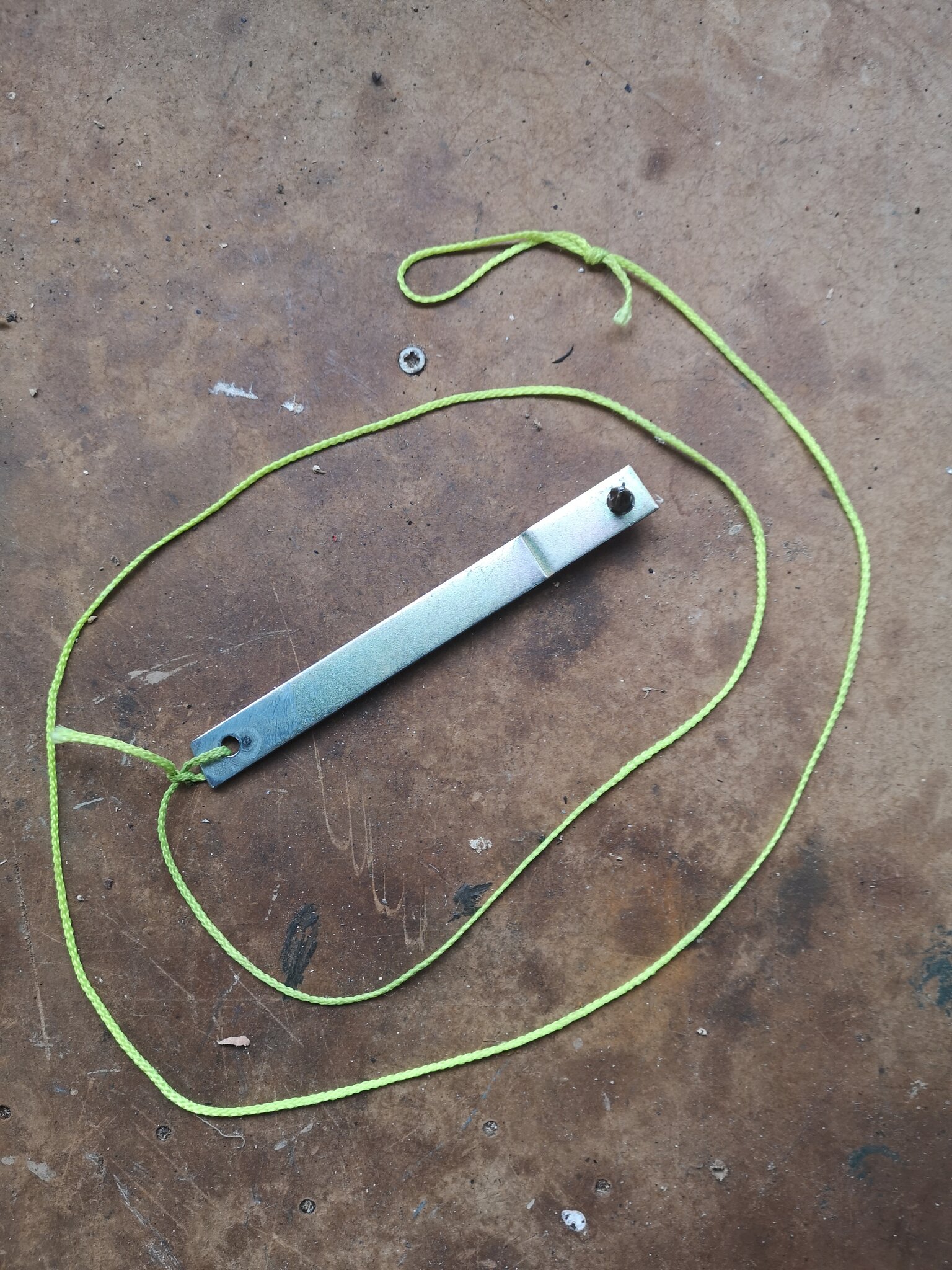 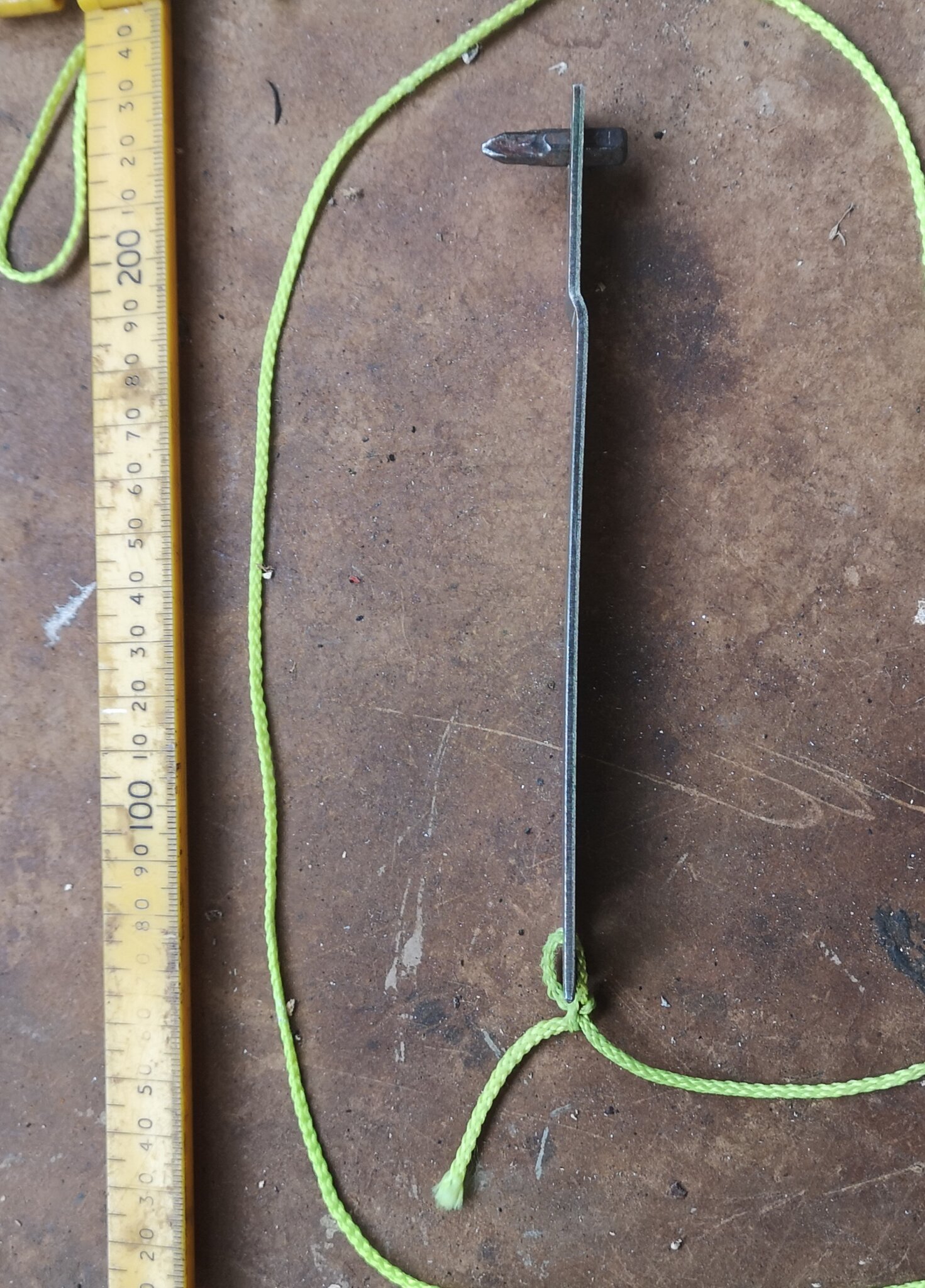 Once I had removed the T piece, I made a slot out of the clearance hole so that the screw didn't have to be removed fully in the future.. 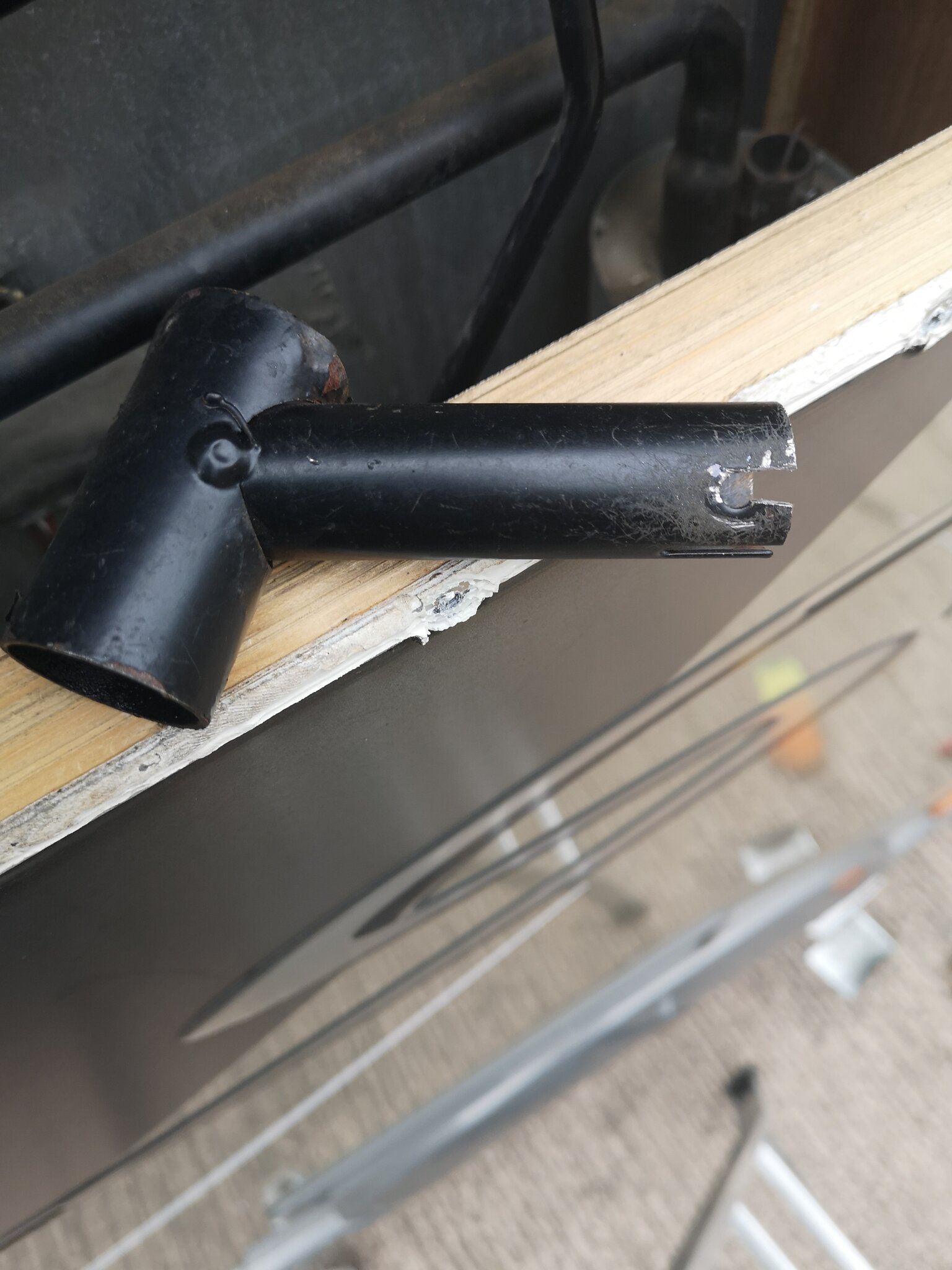 I then removed the baffle from the flue and cleaned that... 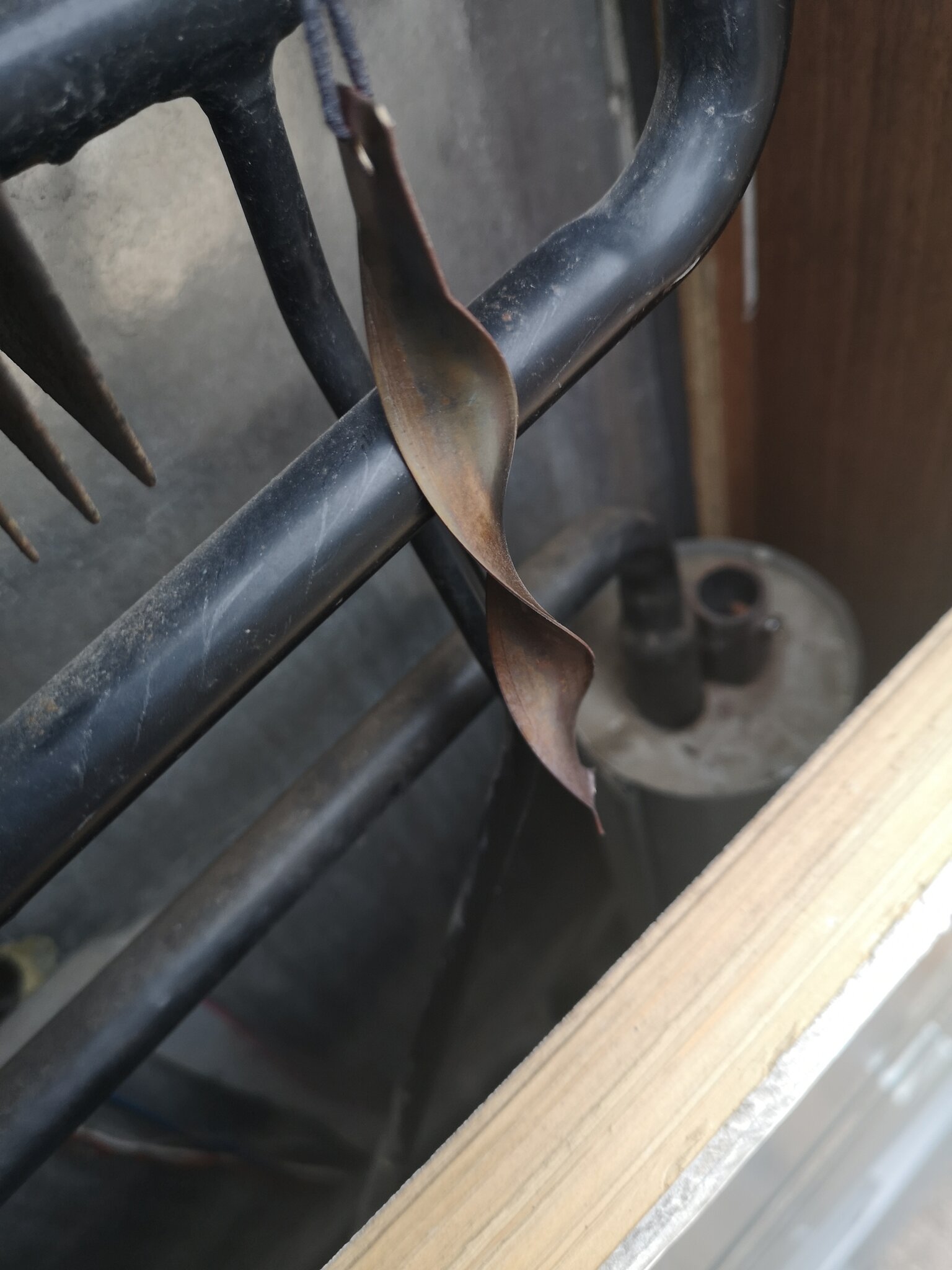 The baffle hangs inside the flue on a bent piece of wire.

Once baffle is removed the flue is now accessible to clean. I had a tube brush in my plumbing toolbox which I extended with a length of stiff wire.

Once brushed, I used the airline from the compressor to blow out the debris and clean the burner. I shall buy a can of compressed air for when we are away from home.
Refit the T piece and the draught guard. Turned on gas, switched the F/F on and got a satisfying roar.

An hour later got these results in the Freezer and Fridge respectively... (3 of the 5 temperature lights on) 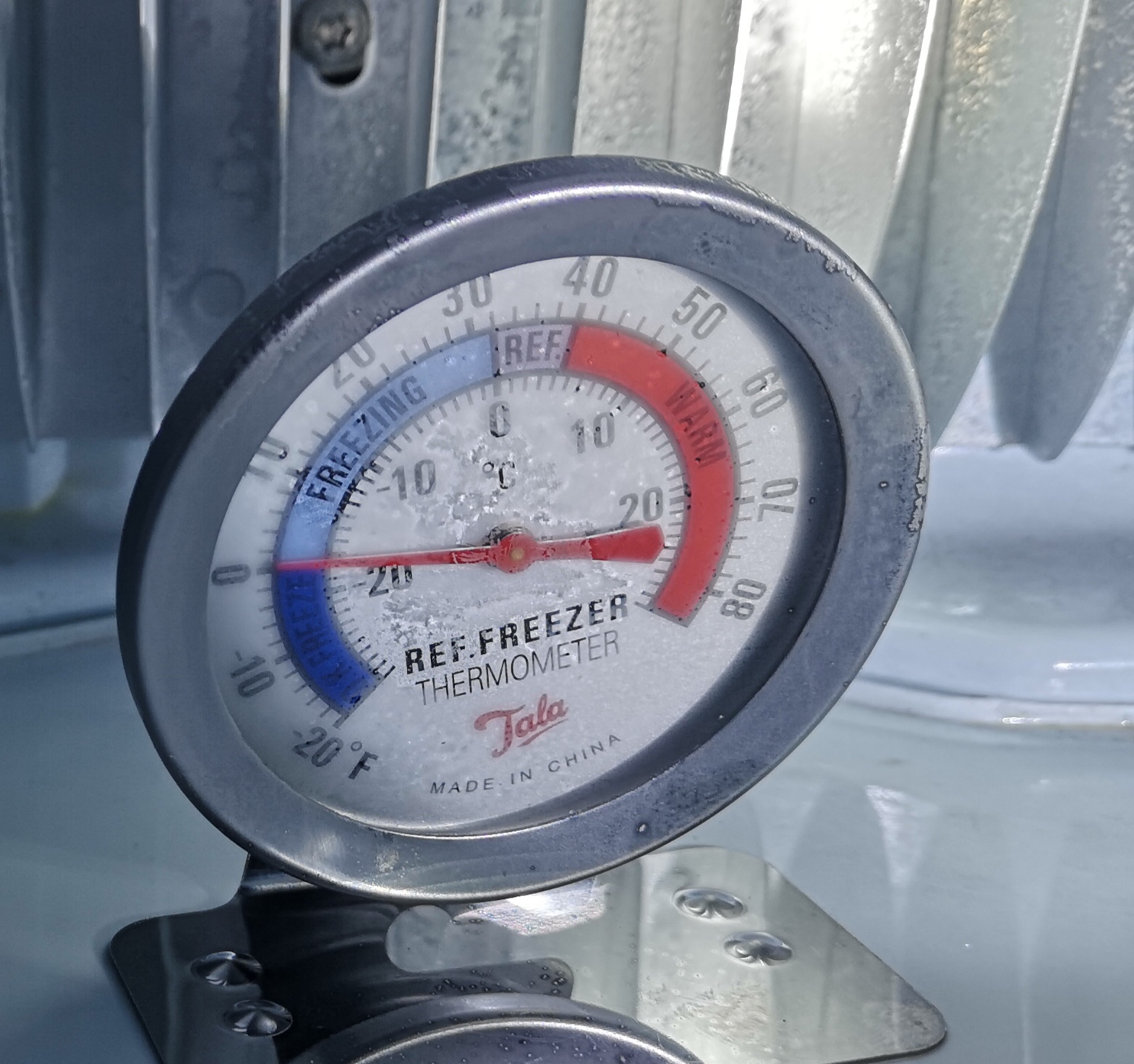 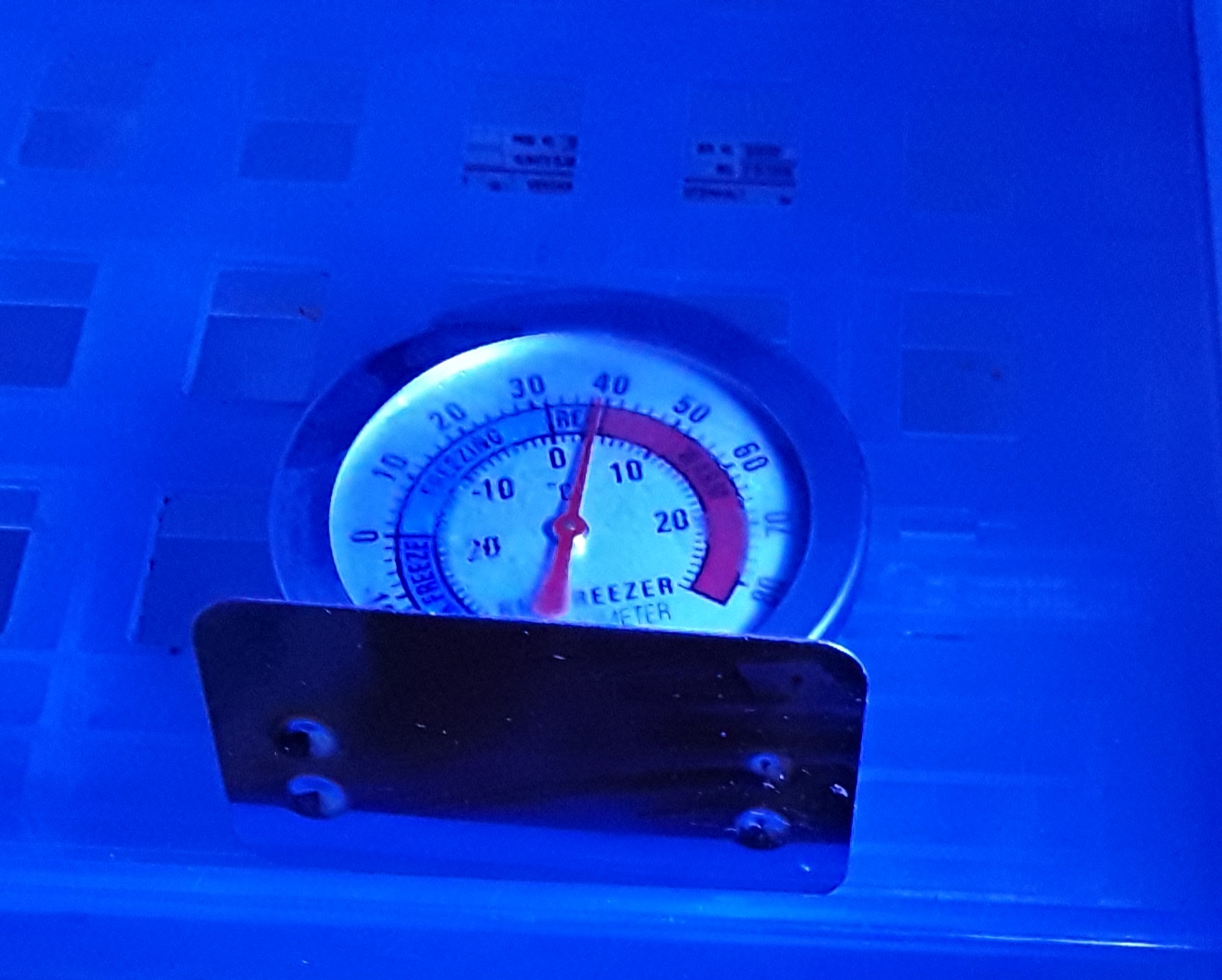 Refitted the frames with new sealant and fit the vents.

This is a well known fix for fridges failing on gas. Good to see pictures posted for those members not familiar.

A brilliantly illustrated fix, thank you.

Apparently i am not gassey enough

realistic, unrealistic or not pushy enough?
2