Great Motorhome apart from the ELECTRIC BED. It had a mind of its own. Would go up but would not come down again. Got fed up with it being so unreliable so traded it in. Laika is far better.

Good choice, I'm trying to stay away from any gizmo that will go wrong in the future - an electric bed is on the top of my avoid list.

Reading this forum many manufacturers have had trouble with this.
I suppose that they only use what is available in the market and nobody makes a reliable motor system for the bed.
In choosing avoided this, I will need an occasional bed but decided to use the table makeup bed and a 5cm duvalay rollup mattess with zip up sheet instead.

I have a p716 with the said electric bed, having been told by the dealer what to do if the bed played up (hold the p and down button at the same time for 3 seconds) I have had no problems

I've had no trouble with the electric bed in my P716 since it went up and trapped the mother-in-law.

Mind you, there is a funny smell lingering in the van ......

We have an electric bed I think its great but does sometimes need re-setting. It looks quite easy to change to a manual switch if you want. I think the advantage of effectively a fixed bed that can be left made up all the time and a big lounge/proper shower all in 6m length with a good payload at 3500kg is hard to beat but everything has compromises.

I have a P716 with electric bed problems QFour....would appreciate picking your brains to see what you went througb
OP

Got fed up with ours after 13 months and got rid of it. The early ones used a scissor action arrangement with electric rams with a stepper motor inside ( one on either side ). The control box is supposed to work out the rotations so that they arrive at the same place at the same time. The guy who designed it needs shooting. What a disaster. We were told by SMC that the vehicle had to be perfectly flat front to back and sideways as well. Still didn't make a lot of difference. The bed would squeak and groan on it's way down and you never knew if you had a bed for the night. Last straw was on the south coast. First night of 14 and the bed refused to move. Tried everything but it just stayed where it was. Tried all the resets a few times but nothing.

Eventually we finished up at Southdowns in Portsmouth and their service dept guy knew exactly what the problem was as he had got a Burstner with the exact same problem.

So what was the fault. It's either the ram or the control box. The rams are impossible to get at with the bed up so you have to find a way to get the bed down. From memory left and right rams are different so you need to order two and a control box then you send back the bits you don't need. Ok if you are a Dealer.

Anyway we walked round to their showroom while they were trying to get the bed down and saw a Laika sitting in the showroom. Nothing on it is electric apart from the bed over the garage which never move anyway so can always be used. The bed over the cab comes down when you pull it.

The following year Pilote changed to a newer version of the bed system that has seat belt webbing and a single motor that can be turned manually if required. IMHO it's possibly one of the worst inventions ever.

It might be of interest to all frustrated owners of MOHOs with this type of electric bed that our issue was a dodgy installed gas strut. Having been installed at an angle without spacers, it had worked loose and caused the bed to behave unpredictably and operate randomly, thinking that it was the controller, motors or just plain faulty. I've attached a picture of both struts, showing the problem. Now I have to find someone to realign the dodgy strut as at 2000nm torque I don't fancy doing that myself. 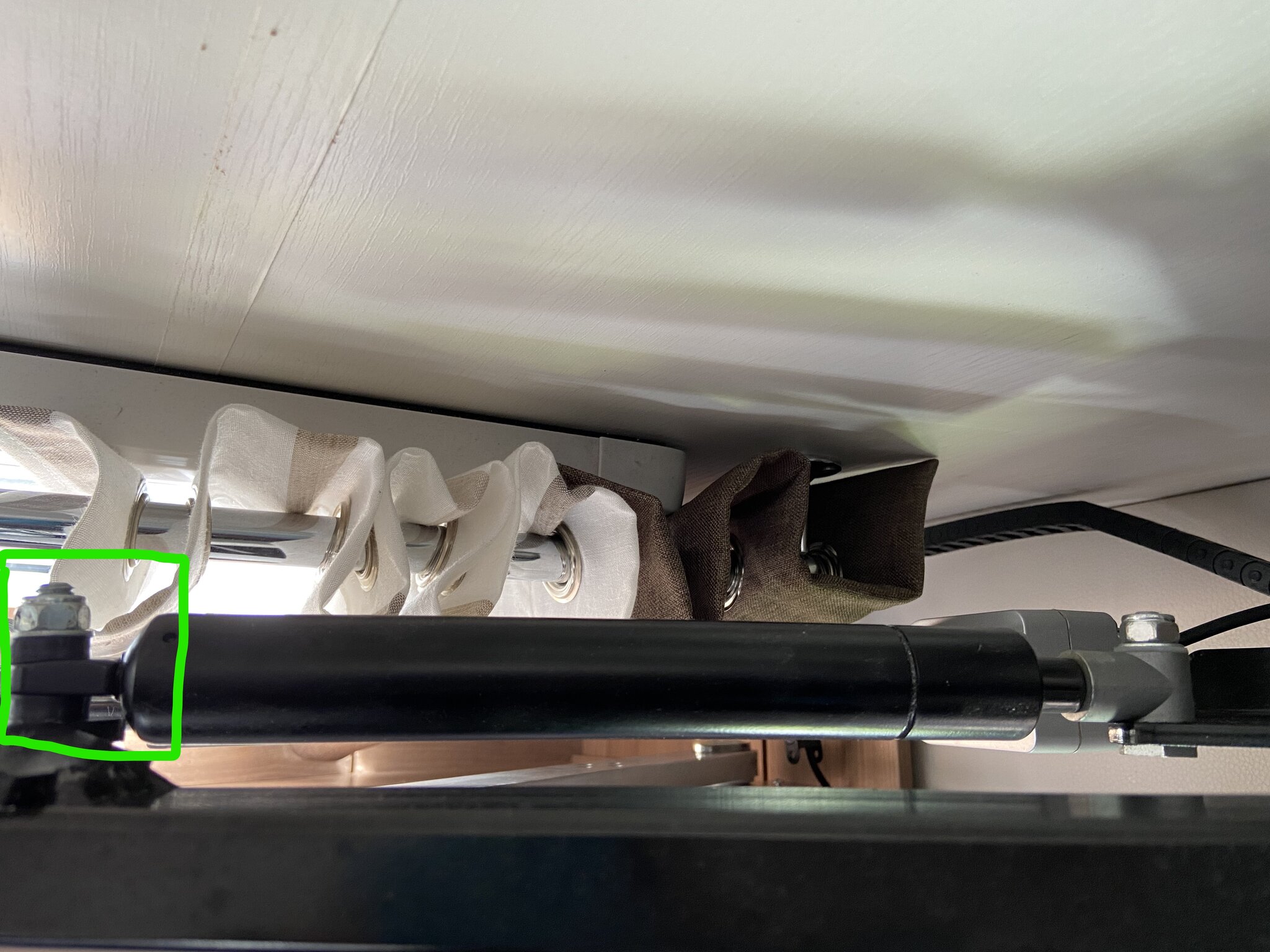 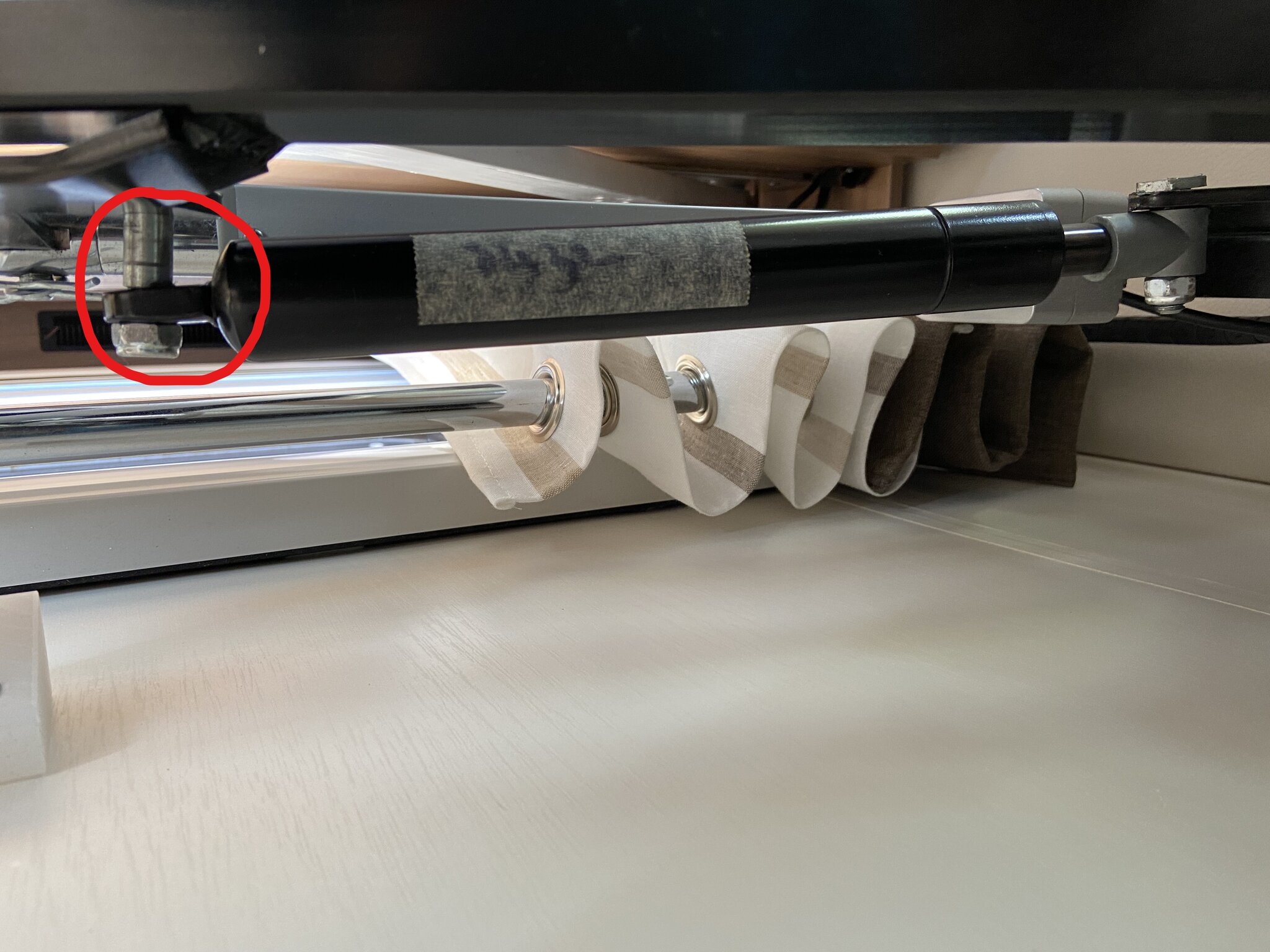