Hi
Travelling to Portugal early March crossing from Spain. I understand I need to complete a Passenger Locator Form however the only one I can find assumes you are travelling by air. Anyone any advice please?
Regards
Alan
S

We had the same problem last September - and the same (at the time) was true for Spain. Added to which the rules appeared to state that negative tests would be required at both borders.

When we got to Spain, and the same was true for Portugal, we had crossed the border without realising it. There were no checks of any sort. I know that this was the experience of most people driving to Portugal at that time.

The problem is that you can't (and we didn't) assume that this will always be the case. It's not impossible for the authorities to set up controls at short notice. The Portuguese have closed the border a few times.

The rules at the time (I haven't looked recently) asked that you had an address where you could be contacted. So our campsite sent us an email confirming the booking.

I'm sorry that this is not much help to you - we were in the same position so we sympathise.

P.S. if anyone has had different experience I would be pleased to hear about it. IF (big IF) the rules for testing are removed by mid-March (indicating that case numbers have subsided) our 90 days will be over and we plan to go back.

You should get it here, but it can only be sent in 48hrs before departure.have a look and enjoy your trip.
Cheers Cris.

Ps,you can change it to English top right of the page after you click the ferry box.

Thanks Cris.
Unless I've misunderstood the OP is going to Portugal. So, even if he's going by ferry to Spain, he'll still need the Portuguese passenger locator form - which, unless it's changed, only has options for those flying or rowing. If he's driving through France he'll need also need a passenger locator form for Spain. I haven't looked recently but I couldn't find passenger locator forms for Spain and Portugal which were designed for driving. Both forms asked for information such as flight number or sailing times etc. Cheers - Spike

Could anyone in Portugal who has travelled from Spain in their van recently tell me please what you had, OTHER THAN A UK VACCINATION CERT. to get over the border. That got us into Spain two months ago on the ferry.

I am particularly interested who were checked on crossing the border and what you produced.

Thank you in advance.

This form is driving me me nuts as I can't 'send' the first part. I gave up after three goes and downloaded the App but it asks me for the flight number!
Has anyone else had similar problems?

Are you trying to get into either Spain or Portugal John? If so the form won't work - as you've discovered it's only for flying or sailing.
We've crossed into both countries twice - since the forms were introduced and there haven't been any border checks. Even if there are as long as you've got all the other Covid info you should be ok. We did take the precaution of having a booking confirmation.

spikehcm681 said:
Are you trying to get into either Spain or Portugal John? If so the form won't work - as you've discovered it's only for flying or sailing.
We've crossed into both countries twice - since the forms were introduced and there haven't been any border checks. Even if there are as long as you've got all the other Covid info you should be ok. We did take the precaution of having a booking confirmation.
Click to expand...

It's for the BF Salamanca. When I click on the 'Send' button after ticking the Robot box I get no response, just a circle with a diagonal line through it. 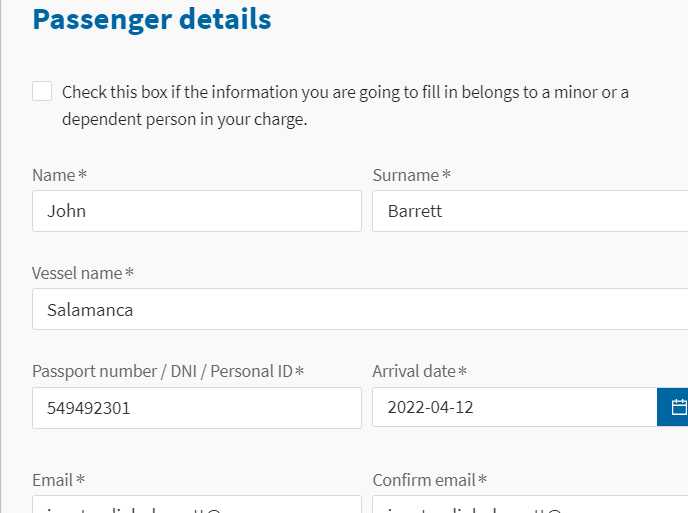 Do you know when from

Who has to fill out the Health Control Form?​

All people who enter Spain from other countries, who do not have an EU Digital COVID Certificate or EU Equivalent. Children under the age of 12 and passengers in international transit do not have to show a certificate or SpTH QR.

I checked the validity of my Cert. here and it is OK. Looks like I don't need the form even though everything else I look at says I do!
Better to be safe...

John Barrett thaks for the information, but have no idea what an EU equivalent dcc or whatever it is in the first box is (tried to copy and paste but not sussed out the ipad yet.

Hi. It is your COVID certificate and you follow the instructions to load your digital copy from your computer and their website checks it out for you: Valid or Invalid.
Show hidden low quality content