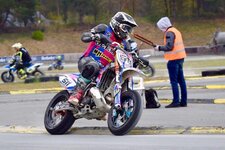 Wow what a bit of kit, that takes me back to racing my cr250 motocross bike god the butterflies I used to get sat on the start gate with 30 other riders waiting for the gate to drop, nothing quite like it

That looks a hoot I take it you push it to start it, them cr500 were a bit of a bugger to start Enjoy it.

The CR500 is an iconic bike, had one back in the day, and loved it, but for supermoto, they are just not the thing to have, for so many reasons. Power delivery is all or nothing, and the stock chassis cant cope with that power on tarmac.

Last year we had the best bike out of the box, and added all the bells and whistles , and challenged for wins, which was great , but my sponsor didnt get a buzz out of the bike, it was all electronics and bolt ons..

Like everyone , he hankered after a 500 2 stroke, and with the years of learning we had into a 300, that was a great bike that just didnt have the HP to run with a 450, he decided this was the way to go... i wont lie, i told him i didnt want it, and it wouldnt work, but in the great tradition of race team owners the world over, he did it anyway ..

So the test was 'eventful'. Weather was sub zero on saturday, which meant no tyre heat at all, and we just ran laps.. well we planned to , but 5 laps in to the first session , it revved itself to oblivion on the way into a turn , and i had to shut it down without becoming part of the scenery.. which luckily i did. 10 mins head scratching and a bit of poking about revealed a blown base gasket, a £5 part that stopped us dead. As we are prepared, we had a spare, but only the same spec as the failed one, so we fitted it , which wasnt a 5 minute job , but rather than tear into it like idiots, we stripped it carefully, and now know we can do a full top end , just by pulling the tank.pipe, and rad covers off, and not having to disturb the rads .

So with that behind us , we tried again, and it ran great. Sunday was a lot brighter, 8° , onto slick tyres to try and find the feel on those , and see what we had. Due to this being a locally run test , there was no electronic times, so the wife was busy with 3 phones, trying to find out who was doing what , but to be honest it was futile, so much traffic, and a 'no heroics on a test day' state of mind, i just went quick where i could, and hung back where i had to. 2 clear laps in the last session, and i managed a 1.09.4, which seemed ok in my head, and nobody passed me, and my visuals on other guys told me it was ok too.

We had to miss the last run to hit the ferry , and left the track at 3pm, and thanks to Germany's excellent Autobahn's manged to bang away the 570km back to Dunkirk, in 41/2 hours. As we went through the weekend on the boat, the wife pulled last year's race time's up, where we did a 1.08.1 in 20° temps. So we might not be far off. Last year we had 3-5 in the races , so maybe if i can find a bit of comfort, and get my finger out, it might be a decent weekend. Its a 1200 mile round trip, i shant be hanging about much.
OP

Steve and Denise said:
That looks a hoot I take it you push it to start it, them cr500 were a bit of a bugger to start Enjoy it.
Click to expand...

No. peice of cake, its a low compression set up, which makes it easier to ride , and start. We are after rideability and top end, rather than the bottom end grunt you need if it was in Sidecar MX spec. The pipe is actually designed for a snowmobile, so it revs much better , so when you come out of the turns, it drives , rather than spin, then keeps going. Well thats the plan.
OP

Well it was along weekend, 2 days at the track with a 600 mile drive each way , weather was patchy , so bit of a tyre lottery, got caught out in in qualifying by opting to run an old tyre, in the damp conditions rather than destroying a new one, and a downpour 2 mins before we went out meant it wasn't enough and spent the majority of the session trying not to aquaplane off. On the good side, lap times were good , went second fastest in warm up , using the same as I had in Quali, which says it was the way to go, but 12th place on the grid made it hard work, and the track was very one line, as instead of leaving the track to its own devices, they swept the tarmac with a street sweeper and the sand with a grader, and made it one line everywhere, which was a shame, because if they had just left it alone, it would have been great, but hey , we are just the riders, what to we know. Upside , I didn't crash, which was really easy to do ( my mate was down 5 times over the weekend) , the bike goes as good as it looks , and we are somewhere near on performance/rideability. Next track will tell us more, for certain, long old hop into the old East Germany , at an old WW2 airfield. Place is totally nuts, old MiG planes and rockets and tanks, loads of buildings with Russian writing on too.

Back from Rd2 , Quick flight to Berlin on Thursday, day looking round Dresden on Friday, which was very pleasant , and spotted a Stellplatz right in the middle by the river that we may use at some point.

Weather forecast was all over the place, depending on who's website you believe, but consensus was that we would be getting wet at some point , which duly appeared around 11am, so after a dry free practice , we got a fully wet timed session , that turned out to be not so good for us. I conditions I would expect to be top 3 I was 17th , after 2 massive aquaplaning issues nearly put me on my arse. The rain kept coming and I didn't see the point of lobbing it, so went back to try and sort out a problem that I had no idea how to deal with.. tyres were good although not new, but it turns out that our discs on the wet wheel are thicker than on the slicks, and having new pads in to start meant the pressure built up in the system as they got warm.That meant the wheel wasn't turning as soon as it started to lift , and that's what I was feeling. As a result of fixing it I rescued a 10th place Qualifying, despite not getting a clear lap, 1 sec off 5th, which was good enough for me. Race 1 finally got off at 7.20pm after a rain delay to clear standing water, and a poor jump off the start , down to me spinning up the rear on some overbanding, meant I dropped back to around 18th, which is pretty dire TBH, but some creative lines , and enthusiastic passes , got me to 10th, and I managed to bridge the gap to the next group , which I got through all in one lap to end up 6th, right on the 5th place guy... in the wet on my bike, I was more than happy.

Race 2 Sunday was dry and sunny, although not warm, and an almost carbon copy race got me up to 5th, but I was dive bombed on the last lap by the leader who had tipped off, and ended up 6th again .

All in all , not bad, a week off and back for a Street race in St Wendel in Saarland, which is tight and twisty and I am expecting to struggle at , but hey, you never know.

So want one!
A

Back in the good old days I had a Kawasaki KX 500 on the road! Road legal tyres, registered and a daytime MOT and away you go. I had to blank off one of the radiators cos at a constant road speed it would run too cold. Brilliant fun. If the front wheel wasn’t lifting it was because the rear was spinning. The number of times I got pulled over by the police was getting annoying though. Wish I still had it. Saying that, I do know where there’s a CR 500 sat in a shed doing nothing. I’ve pestered the owner for years trying to buy it off him.
OP

A S Richards said:
Back in the good old days I had a Kawasaki KX 500 on the road! Road legal tyres, registered and a daytime MOT and away you go. I had to blank off one of the radiators cos at a constant road speed it would run too cold. Brilliant fun. If the front wheel wasn’t lifting it was because the rear was spinning. The number of times I got pulled over by the police was getting annoying though. Wish I still had it. Saying that, I do know where there’s a CR 500 sat in a shed doing nothing. I’ve pestered the owner for years trying to buy it off him.
Click to expand...

You are a braver man than me, i wouldnt want to be running on regular tyres. And what year is the CR..

Pic from the weekend. One of the few with blue skies. 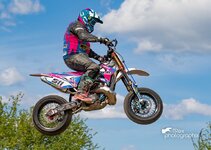 PhilG said:
Pic from the weekend. One of the few with blue skies.
Click to expand...

If god had intended it to fly he would have put wings on it.
OP

hilldweller said:
If god had intended it to fly he would have put wings on it.
Click to expand...

This jump was very steep , straight after a corner, you just went up, instead, of along. And we are running the suspension or tarmac settings so its really stiff, which dont help the landings.
A

The CR 500 is one of the first made. Used condition, complete, original engine. I've offered well above market prices but he won't sell! Oh, and it's in France.

A S Richards said:
Looks like your air bag has gone off!

The CR 500 is one of the first made. Used condition, complete, original engine. I've offered well above market prices but he won't sell! Oh, and it's in France.
Click to expand...