Spent £150ish pounds for this 10 incher . Now powered by Hab battery as advised by EVB. 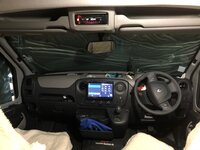 The new screen is android and I am iOS so fiddling about a bit with the Apps but my maps came across from co-pilot at no cost just don't know whether to buy the Camper version again.
The radio is analogue but does all required.
The phone works well and clearly but no contacts so working on that - but not over bothered. Tend not to make calls en route but receive if someone wants to contact me.
It is supposed to mirror from iPhone but not too bothered and written to the Chinese asking to return it on that basis, in the hope they will either get the App from the China App store or give me a few quid off.
Android apps tend to struggle with a landscape format but interesting trying to circumvent any minor issues in some of the more obscure apps downloaded.
Downloaded a film to it and that displayed well in HD.
Music via Bluetooth works well.
So overall very happy for the price as it does all I need - there is a camera with it so may fit it in the number plate as I have a large overhang which grounds easily and the reversing sensors trigger easily
It may be sitting a bit low on the dashboard so has anyone used the top slot for a single din?
I have moved the old radio into the overhead unit which will now act as a clock - it has a removable display so will only be on standby when out and about.
Show hidden low quality content
You must log in or register to reply here.
Share:
Facebook Twitter Reddit Pinterest Tumblr WhatsApp Email Link