Have seen some disturbing articles in the Telegraph and other papers and there are some nasty looking pictures on the internet. It seems a rider lost consciousness and his horse died from breathing toxic fumes. There are also reports of French people protesting about the problem which is said to affect 100 beaches in Brittany and it seems the algae is spreading along the atlantic coast.

Would like to hear from anyone who has recently seen the problem and extent of it first hand, rather than rely on what might be sensationalist or panicing ing newspaper reports before we set off on our trip in the next could of weeks.

The report about the horse dates back to an article in the Guardian in 2009. Such toxic algae is found in this country as well, only last week we were at Grafham Water in Cambridgeshire and there are signs around the water's edge warning you not to swim or to allow dogs to enter the water or to let them drink it. There it's called Blue-Green Algae and can be seen along the edges of the water on the beaches.

Exp
since a child

usually its a red algae. that hits brittany , most beaches have signs saying dont pick up the shell fish etc to eat.
its quite a normal thing over there . seems to happen almost every summer .
it will be well sign posted on the beaches that are effected .

Just had another look at the article in the Times today. It reads as if the has just happened and mentioned nothing about the fact that the Appeal Court in Nantes ruling yesterday was on a matter that occurred in 2009, which is in fact the case. Poor reporting! No need to worry, just something to be aware of.
T

Forgot to mention too that all the way up the west we've seen literally dozens of people collecting muscles etc from the beach ....We Even had a bowl full from a nice old guy at Le conquet they were great

Exp
since a child

its very often signposted around st pol de leon or further across near st brieuc . it seems to be in the wide bays that are kind of sheltered .
usually the surf beaches on the west coast the water changes so much it doesnt usually grow , its in the shallow calmer waters that it likes . around brest can get it as well again sheltered waters .

I was under the impression that the horse and rider incident, along with a later incident where a local council worker was overcome, were due to methane gas generated by large mats of rotting seaweed, and not the toxicity of algae. A similar effect to the slurry tank tragedies that occur in farming where one person is overcome and falls in, and their would-be rescuers become victims too, for lack of respirator equipment.

tambo said:
Forgot to mention too that all the way up the west we've seen literally dozens of people collecting muscles etc from the beach ....We Even had a bowl full from a nice old guy at Le conquet they were great
Click to expand...

They generally do this on spring tides, when the sea goes out much further at low tide. We saw hundreds doing it in southern Brittany last year. They would collect anything edible, mussels, shrimps, crabs. I now keep a net in the MH! 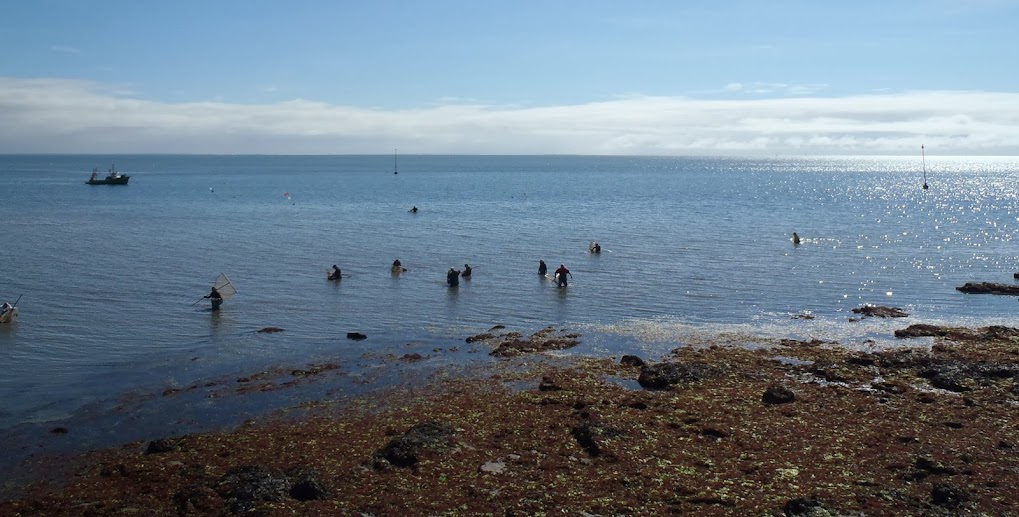 Thanks everyone, most comforting

I love the French national obsession with cocquillage au bord de la mer - it makes a great comedy photographic subject. These were all taken in the Bonne Anse tidal lagoon at La Palmyre:

Were are going to the beaches in Brittany this week, I'm sure they are all ok. We did notice the rivers near Epernay in a Eastern France were a milky green colour though last week.
Wouldn't want to have drunk out of them!
Allan