I am thinking of buying a fifth wheeler although I have not seen many about , in fact only one in forty days out since April, does anyone own one or had one ? can anyone offer advise/tips ect even reasons for getting / not getting one , I currently have a Comanche which is great but often find ourselves stuck in one place, we have some electric bikes but not always practical to use them, I don't get the idea of a tow car but understand why some people have one and often think why don't they just get a caravan. However a caravan is not for me (can' explain why) but I do fancy a fifth wheeler. Any thoughts?

There’s a couple of funsters that have fifth wheelers. We tow a car which we love and have no intention of selling but it won’t tow a caravan or accept an A frame. Also we can run solo so doing use Aires on the continent. 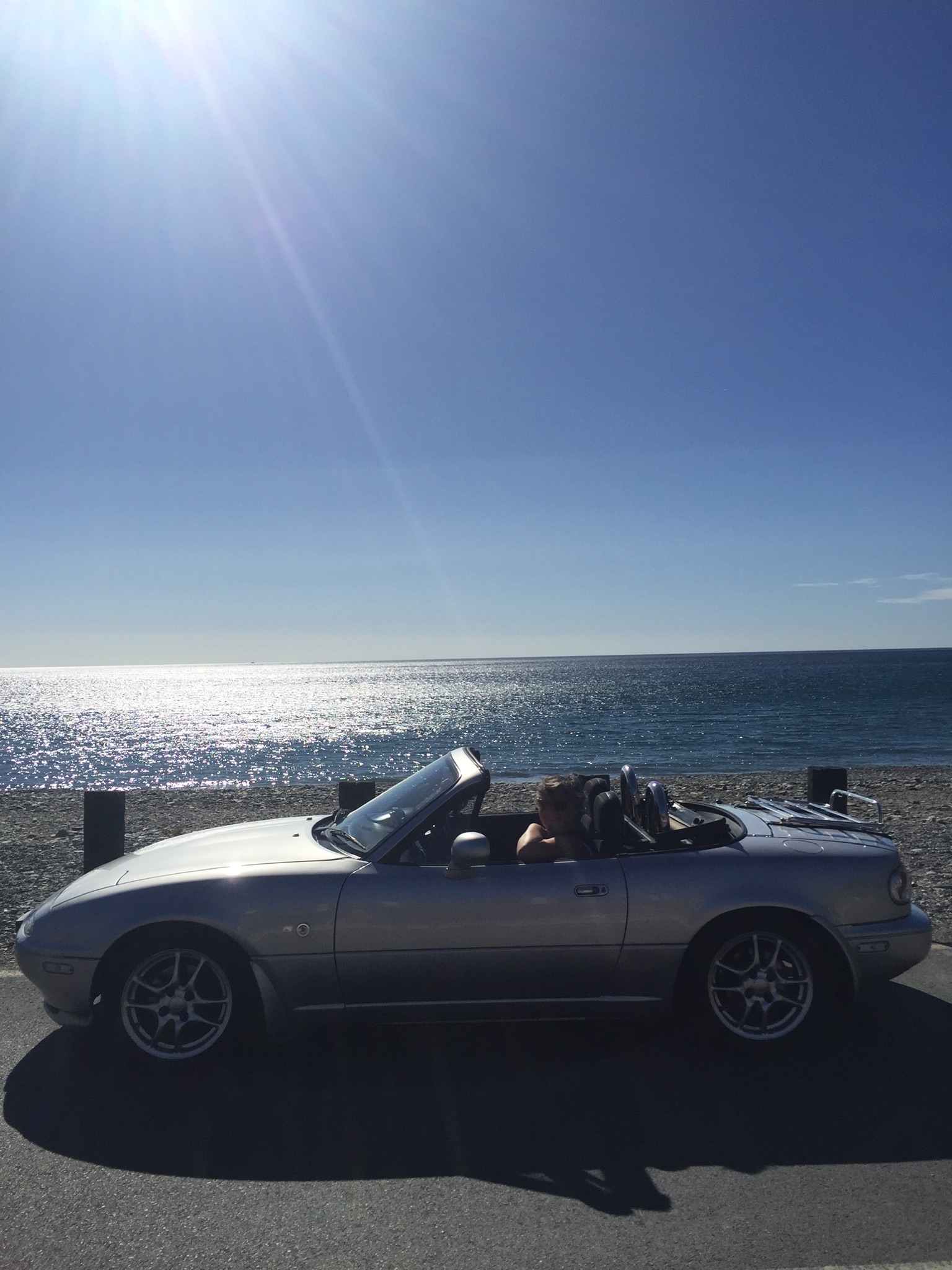 Better value and more flexible than a big A class perhaps.

Exp
Now in fifth year and with American RV

You will be better asking these questions on our sister club, RVOC. UK that's where all the RVers and 5th wheelers can be found.

Exp
8 years with an RV

I had a 5er, a Dodge Ram, and 30ft Holiday Rambler trailer. A great combination. It was spacious to live in, and a doddle to tow. Much better behaved than a caravan. And reversing was easy.
Ours sat at 44ft when hitched, but drove superbly.
We sold it because some sites in the UK didn't want to know, and abroad we like using aires most of the time, and 5th wheels and caravans are not allowed on them.
Would I have another?.....absolutely!

Seen three at least today, but dont think i have ever seen one on the road. I’m not surprised by that as I don’t really see them as a touring item to be honest.

Badknee said:
There’s a couple of funsters that have fifth wheelers. We tow a car which we love and have no intention of selling but it won’t tow a caravan or accept an A frame. Also we can run solo so doing use Aires on the continent.

Wack said:
but if you're towing an MX5 on an A frame I might start looking at Fiat 124 spiders
Click to expand...

No Paul tows it on a twin axle trailer

If you read my post again it says my 1993 Eunos Roadster won’t accept an A frame. I checked with the two big suppliers before buying the trailer 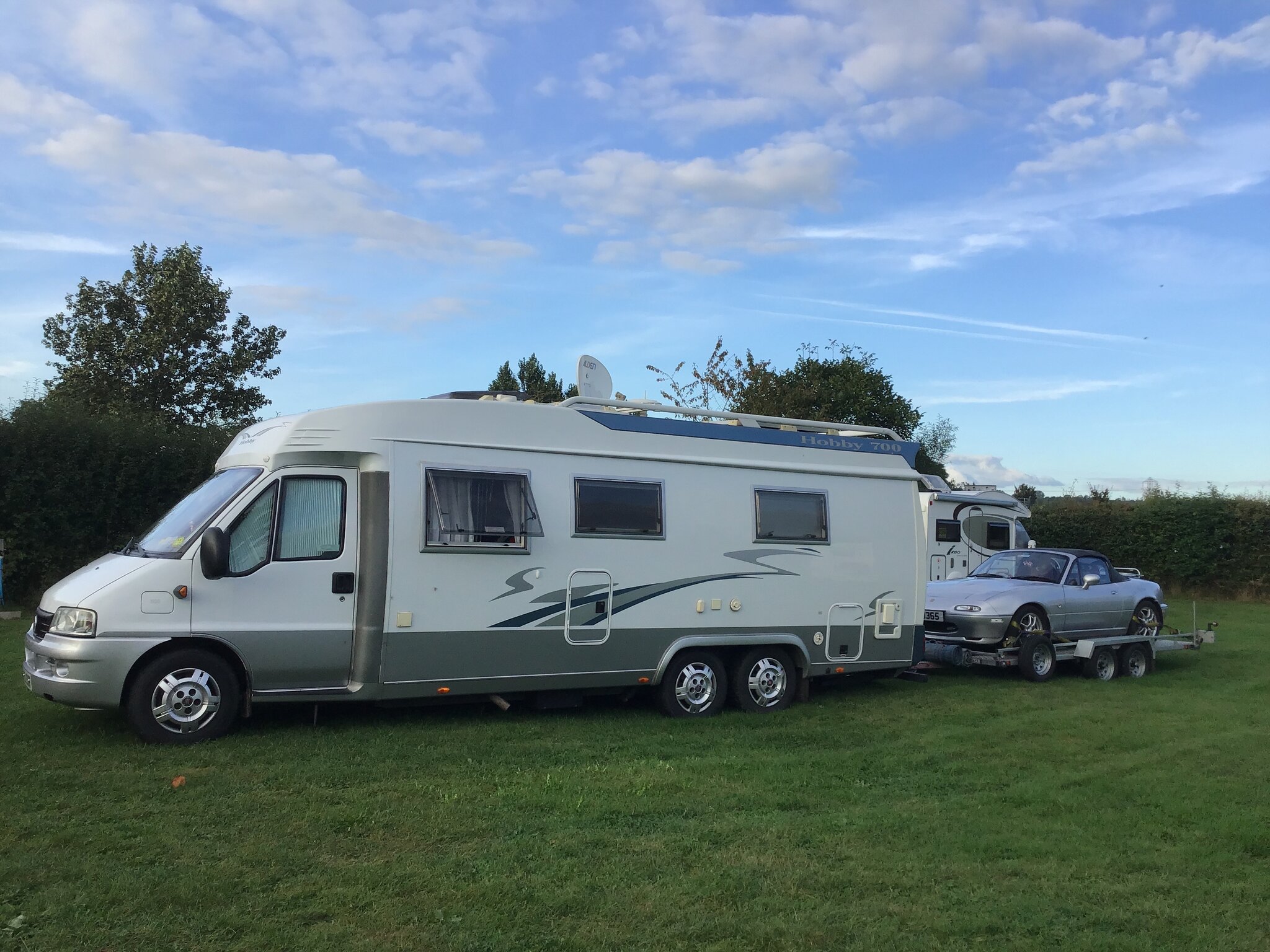 I lived in a fifth wheeler in the US for about 8 months and towed it over 15000 miles. Once hitched, it towed easily without tugging the rear of the pick up around - unlike a caravan. Manoeuvring it around was not too difficult and take sharp bends "wide and slow! and allow plenty of stopping distance in the wet. Use one in the UK?? I don't think so unless you get a fairly small one. My US one was 51 feet long from pick up nose to fifth wheeler tail and was about 12 feet high and would have been a b****er to get onto UK sites even if it was allowed, and they work best with fully serviced pitches as provided in the US. Summary?? Brilliant for use in the USA, impractical in the UK.

We've had a Kountrylite 26RL for 12 years from new. We spend a very very very lot of time in it but obviously aren't full timers as no one will cover you AFAIAA. Our insurers state 24/7 365 cover plus Europe but wont cover fulltimers..........so we're not.
Before the 5ver, we had a selection of UK motorhomes and then 2 x A Class RVs. In between, we had a Kia Sorrento + twin axle but after 10 months and some VERY twitchy motorway moments (at a MAX 57-58mph) we decided that caravans were'nt for us! Thankfully, we found the KL which were imported by Calder leisure(no longer in the game). I can honestly say that in 12 years, I've never been sorry that we got the 5ver plus Navara. That said, it's due to our pretty comprehensive usage and the fact that as CAMC Wardens, the 5ver really is the ultimate "apartment" for what we do. It's been to Spain for the winter 6 times via Eurotunnel and just about every different route to the med looking for the flattest one! With a 2.5 four pot Nav, we get between 13 mpg (steep hills) and 20mpg (motorway flat). A better option would be a D40 V6 but SHMBO wont let me! The KL runs on rails, FAR better than our Chevy coaches which wifey wouldn't drive. This, she loves. I fell asleep near Le Man and woke up near Bordeaux! errrrrr, she was driving!
BUT, would I have one as a purely holiday 'van in the UK? TBH, I'm not sure I would. They're a hell of a beast to lug around for normal weekends and holidays and country lanes can be fun to say the least. You SHOULD be able to reverse or you're just a bl**dy menace on the road. It's tended to change the way we tour. With motorhomes, we toured on the way. With the 5ver, we tend to take the easiest route to site and then go out solo in the Nav for sight seeing.
I suppose a good benefit is that once on site, you still have the pick-up for shopping/sightseeing where-as with the A Class RV's, we carried a motorbike and the wife used to love pulling up around the corner from the restaurant so she could salvage her hair! Space is awesome with them as most if not all 5vers have at least one slideout, I'm not aware of any slab sided fivers. Tanks are awesome at 35-40 gallons each for grey and black and TBH, I've never understood the rubbish that's printed about emptying. We have a maccerator, a gravity drop and a roll tank. How hard can it be?
At 27ft, ours is as big as you really want to go with a jap pick-up, any bigger and you really do need a yank. We'd had 2 yank V8's and frankly, they may be mechanically bomb proof but electrically, the were a bl**dy nightmare and both spend quite a bit of time in the workshop so we decided to stay jap/european. Again, at 27ft, your going to have a good range of sites to go at as you're only fractionally longer (train length) than a twin axle. The difficulty is that when pitching, you have to use the truck, not a motormover so although you'll go on a standard pitch, you might need a bit more maneuvering room to get on it.
We've got 3 working years to go and fully intend to stick hold of the KL (looming major rebuild of the leaking slideout wall not withstanding!). When retirement comes, the loose plan at the mo is to permanently pitch it in Spain and either keep the Romahome Duo we have for use in the UK (yeah I know, hell of a contrast but we love it) or possibly buy a small coachbuilt. It all depends on the fuel situation and what the permanent pitch fees are then.
Your choice for a 5ver is yank or Fifth Wheel Co (Wales). I'm not going to say one is better than the other. We did the factory tour at FWC but decided we didn't like the interiors. I would say that the quality of a Celtic Rambler is better than yank workmanship but at 50K, it better be! Ours was 28k 12 years ago but the big factor for us was the interior layout and furnishings/materials. Yank interiors are a Marmite thing for UKers. You either love 'em or hate 'em.
In a nutshell, we LOVE our 5ver. Would I recomend one? Hmmmmm, depends on your wallet and intended usage.
I wouldn't dream of saying DONT DO IT! I would say, think VERY carefully.

We have had our Fifth Wheel company Dreamseeker for 6 years now only 7.6m long no problem on Uk sites we tow it with a 2016 3.0 Navara

Thinking of getting an "Action Camera"