My X290 Ducato has a Pioneer single DIN radio & I have purchased a Fiat 250 VP2 ECE Double DIN head unit.

I have removed the Pioneer and can't figure out what connection go's where, Do I need any additional connectors or adapters? 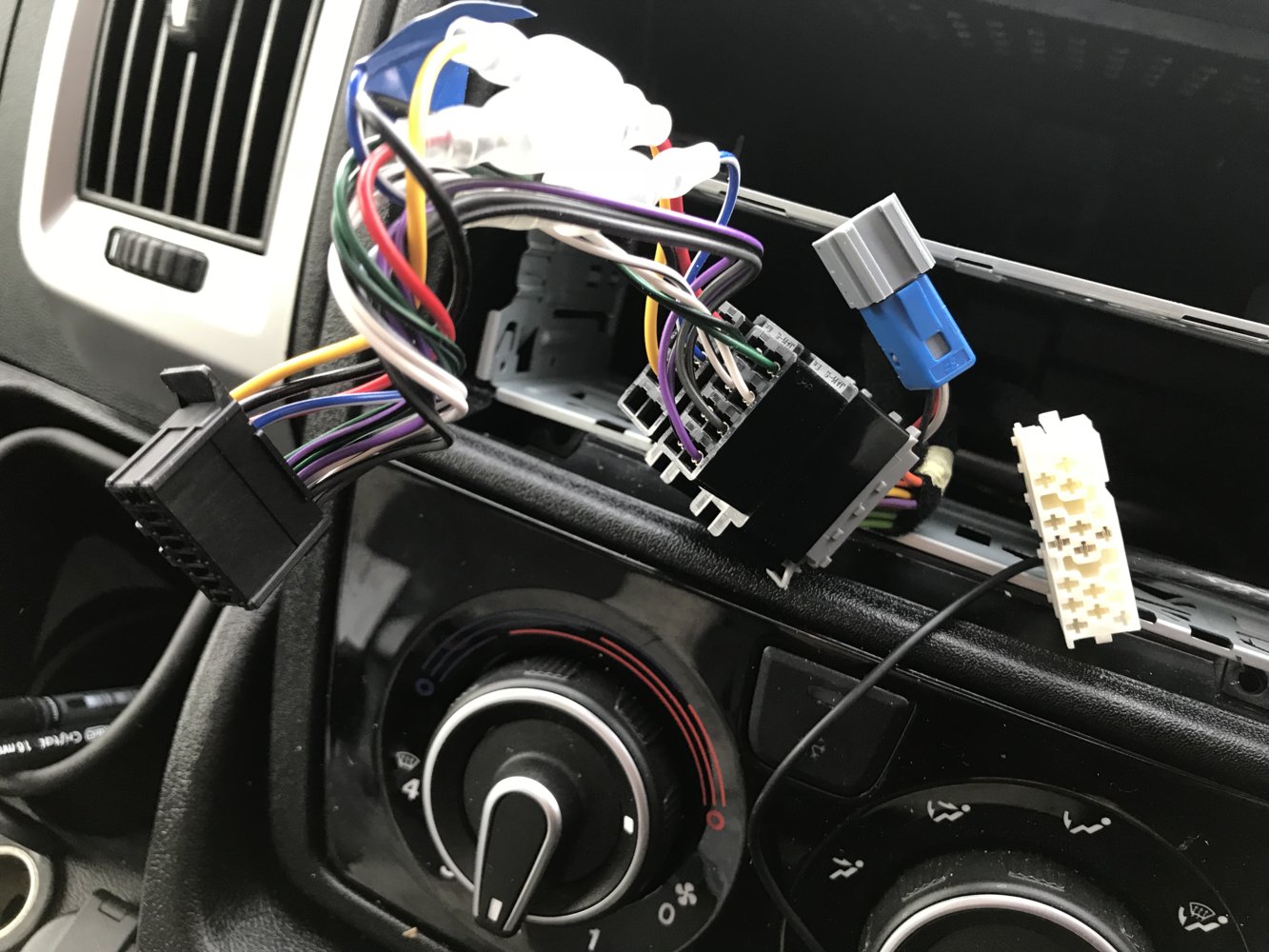 Current wiring, there is also a mic input out of shot.

Rear of Sat Nav with gps antenna plugged in. 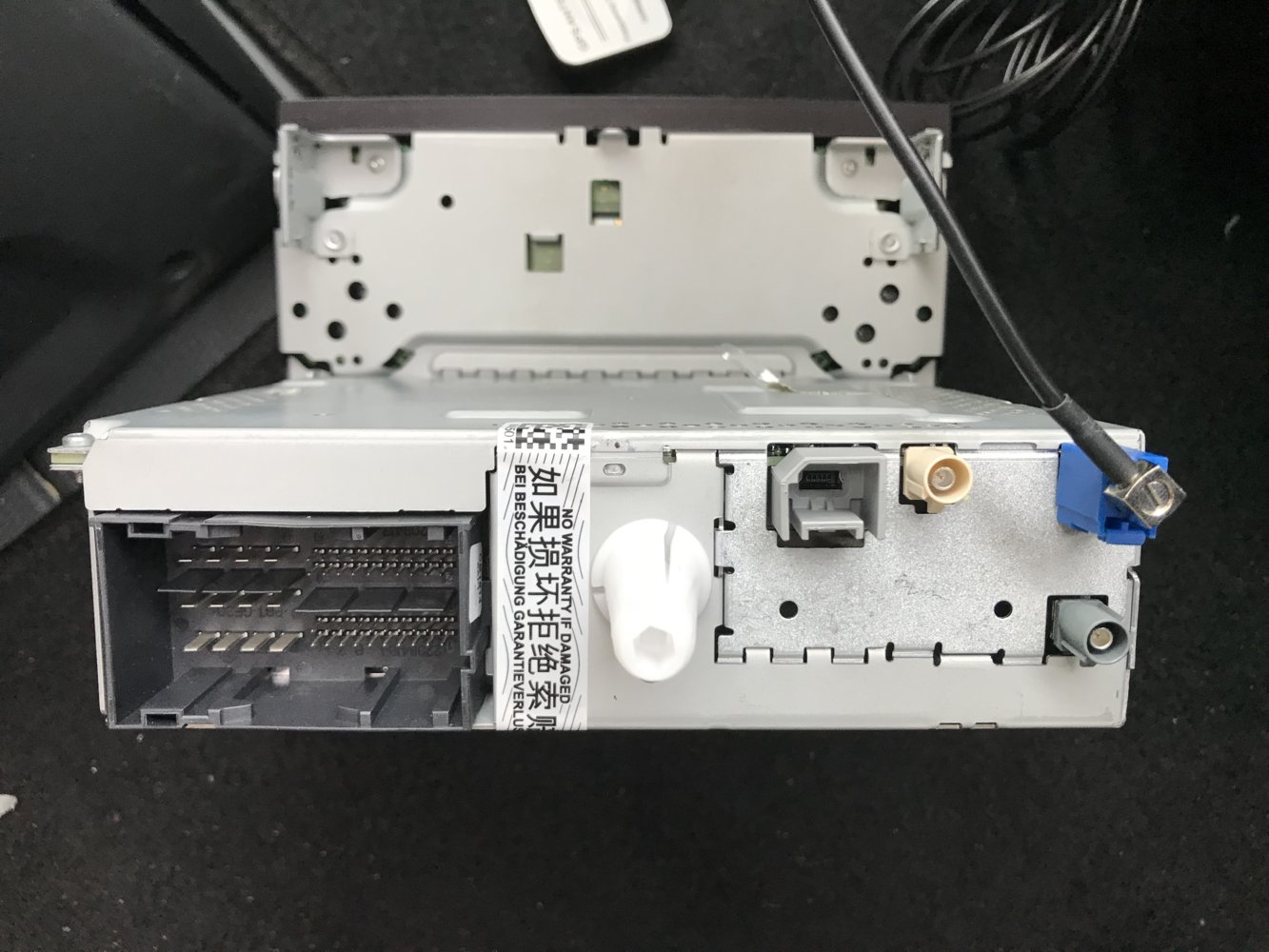 Looks like the ISO adaptors for the Pioneer are plugged into the Fiat connects you just need to unplug them.

Anyone know a mobile vehicle audio fitter in the Sheffield area?
Upvote 0

Bepto said:
I have unplugged the 2 black blocks from the grey block in the 1st picture but still can't seem to make any connections on the unit

Anyone know a mobile vehicle audio fitter in the Sheffield area?
Click to expand...

Just look on eBay for the correct adaptors.

Have a look at these.
Upvote 0
OP

Cant see anything there - what about this http://www.halfords.com/technology/...es/autoleads-sot-040-for-citroen-fiat-peugeot

Could be the one and easy to take back if not.
Upvote 0

Being technically incompetent regarding electrical stuff I couldn’t possibly give you advice, but as we are looking for a new sat nav, can I be nosey.
What features does it have?
Our current one does CD, DAB/FM/AM radio, hands free telephone and the rear camera, so we’d like one that does the same but incorporates a sat nav.
Upvote 0
OP

Its the standard factory fit Fiat Ducato/Boxer Sat Nav unit - Not fantastic as I understand it but better than the bog standard pioneer unit it's replacing. 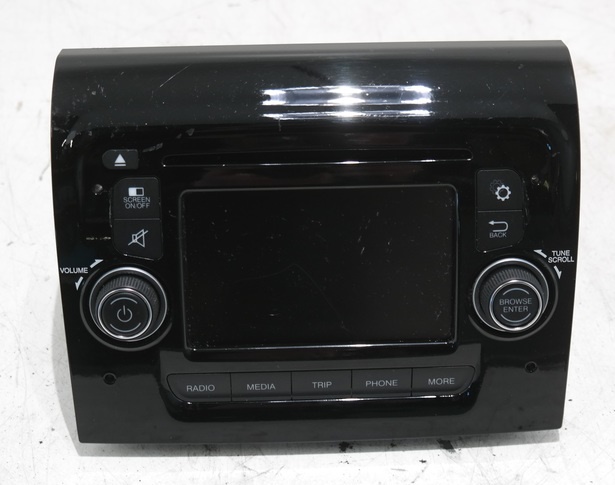 Lenny HB said:
Could be the one and easy to take back if not.
Click to expand...

Think I'll take the unit down to halfords let them have a look.
Upvote 0

you need the correct harness.
Upvote 0

Would have thought the new unit would have come with connectors that plugged into the back of the unit with the other end terminated in standard ISO fittings. Our new Chinese Android unit did.

You say that your van had a Pioneer radio. Was this fitted from new? If so, the van would have been supplied to the motorhome converter with the factory installed radio prep pack, which is designed to allow the installation of a standalone aftermarket audio system such as the Pioneer and as far as I know is not integrated into the vehicle's canbus.

The VP2 unit that you are trying to fit is integrated into the canbus with a different wiring loom and communicates with the body computer and the instrument cluster, both of which are configured to interface with it.

If you search the internet you will find some posts relating to the Fiat units being removed and replaced with aftermarket units, which involve a lot of work and some reprogramming of the body computer if you can persuade a Fiat dealer to be interested. Some suppliers of aftermarket units for the Ducato exclude vehicles with factory fitted radios from their compatibility lists due to the problems involved in fitting them.

I'm not aware of anyone having tried to do it the way that you are doing. I have no idea of the pin-outs for the connectors, but some will be canbus connections that you probably don't have on your vehicle. You may find that your body computer is not compatible if the vehicle was supplied with the radio prep pack rather than an integrated Fiat radio.

It might be possible to obtain a can interface unit to provide the missing connections, although to be honest it seems that most people want to replace the VP2 with an aftermarket unit, rather than the other way round, as the satnav function in particular is a very paired down and rather poor implementation.

Edit: Just to say in summary, that it will certainly be a great deal easier to fit an aftermarket radio/nav unit than to try and get the Fiat unit working on your vehicle, unless it came from Fiat with a VP2 unit fitted in the first place.
Last edited: Feb 14, 2018
Upvote 0
OP

hmm interesting - might have to go on eBay then - anyone fitted one of the cheap android head units that are all over eBay?
Upvote 0

When I traded my last van I took my Clarion unit out and fitted a cheap eBay one I was surprised at how good it was, it didn't have all the features that I need but for a 100 quid it was good. You do take a chance with the cheap ones as the minimum quality standard will far lower than a branded one, you could get a very good one or one that not so good a bit of a lottery.

Bepto said:
hmm interesting - might have to go on eBay then - anyone fitted one of the cheap android head units that are all over eBay?
Click to expand...

Fitted one of these http://xtrons.co.uk/td696ads-6-95-a...in-car-dvd-player-with-built-in-dvb-t-tv.html which replicates the functionality on the Auto-trail woeful media unit.
You will be able to get a cheaper unit though with reduced functionality if not required.
Upvote 0
OP

I take it you needed some kind of facia plate with that one?
Upvote 0

Bepto said:
I take it you needed some kind of facia plate with that one?
Click to expand...

Bento
Looking at upgrading my unit to same as yourself, what are the connections at the rear coloured cream,blue and grey?
Did you finally get yours working?
Upvote 0
B

bepto is not a subscribed member and last visited the site in May 2018. so doubt you will get an answer from him
Upvote 0
B

The Big 1
Thanks for that info
Upvote 0

Bill contact connects2 who make a series of iso wiring harnesses they will get you to send pics of the original radio (there are multiple connecters used by psa on the same chassis. also you need to specify what the new head unit is, this is for the steering wheel control. I made the mistake of just getting the cable set that was listed for the peugeot boxer but needed the iso cable set for a ducato (i have a peugeot)

Exp
enough to know i shouldnt touch things i know nothing about ....

Hettie's Crew said:
Being technically incompetent regarding electrical stuff I couldn’t possibly give you advice, but as we are looking for a new sat nav, can I be nosey.
What features does it have?
Our current one does CD, DAB/FM/AM radio, hands free telephone and the rear camera, so we’d like one that does the same but incorporates a sat nav.
Click to expand...

We bought one from ebay an xtrons unit direct from xtron. Its a single din but has screen that comes out when its turned on. Has everything you need and more !!
Upvote 0

Bepto said:
Its the standard factory fit Fiat Ducato/Boxer Sat Nav unit - Not fantastic as I understand it but better than the bog standard pioneer unit it's replacing.

Hi
Are you sure that is a Sat Nav unit?
Upvote 0

You already have the connector I think. Just remove the extensions that have been added. I took my Fiat Sat Nav out it's on top of the wardrobe. Maps were not up to date and entering POI's is one by one. Although it is a TomTom Sat Nav a lot of the functions are missing including updating the maps. I took mine out and fitted Blaupunkt Capetown.

If your speed starts flashing the ECU is not happy and you need a trip to the Fiat Professional Garage to sort out the Fiat Software. You may find you cannot change the date and time as its all interlinked. Have fun I did took me weeks to get the Steering Wheel Controls working.

I have been trying to remember what I did when I removed mine. It was connected straight into the wiring harness. The white block is part of it as that has the CanBus Connector part of it. The SatNav links to the CanBus of the Fiat so you can change the date and time. The extensions that are on do not look part of the Fiat wiring but have been added by the converter.

If the blocks you have at the end of the Fiat wiring don't fit the radio then there must be a part from Fiat that is missing. The Radio you have does not fit anything else. The only wiring harness bits that are usually available are from the manufacturers plug to a Aftermarket Radio.

The SatNav is an option when they buy the vehicle. I cannot see Fiat having different wiring harness for those with and those without.

QFour said:
The SatNav is an option when they buy the vehicle. I cannot see Fiat having different wiring harness for those with and those without.
Click to expand...


They do. Vehicles can be ordered with no radio fitting facility, with factory radio/nav units or with "radio prep" option which is a different loom and connectors for standard aftermarket radio units. Factory radio units are interlinked with the body computer and the instrument panel control modules which is why you get the flashing odometer when you remove it. The flashing indicates an error on the canbus system in that the vehicle configuration detected when the vehicle is started does not match the configuration stored in the body computer. Radio prep option has no interconnection to the vehicle bus, unlike the factory installed units.
Upvote 0

Yep been there done that. I have SWC as well but when you turn off the " Has Fiat Radio / Sat Nav " in the ECU it then adds the Date / Time to the menu options on the right near the steering wheel and then it decides that as you don't have a radio / sat nav fitted you don't need the SWC do you. I finished up sitting with the tech guy with his computer in the MH while he talked to and downloaded updates from Fiat. EVENTUALLY we got most of it working but the SWC were going through a decoder for the Blaupunkt Head Unit and it was telling the ECU that it was there. As the ECU did not recognise what it was it just through up an error and the speedo started flashing. I took the SWC decoder which I bought from Germany to bits and traced the Transmit line to the CanBus using a large magnifying glass and cut the track. That stopped it sending messages on the CanBus and everything worked. Been up and running now for nearly 3 years.
Upvote 0
Show hidden low quality content