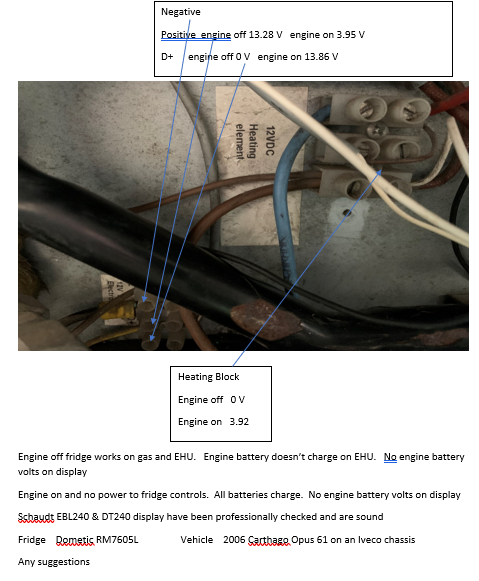 Sort by date Sort by votes

are you doing those readings across live and neutral on the terminal blocks ?as it sounds like a bad earth somewhere
Upvote 0
OP

Exp
Since the 80s

Thanks for all suggestions. When I last had a charging problem, red light on dashboard staying on, it was a faulty relay on back of fridge which controls the 12 volt heating element. No idea why that has anything to do with the charging system but I think the charging and fridge faults may be related

Exp
Since the 80s

In addition to the power two wires I mentioned, there is a third wire which is a control signal to indicate the engine is running and the alternator is charging. That's called the D+ signal, and it's produced by the alternator. It switches off the red charging light on the dashboard, and also controls things like the split charge relay and the fridge relay.

Thanks for explaining the faulty relay as I didn't understand a fridge relay causing my charging issue. It took me a long while to find it
Upvote 0

The salty bit of Hampshire

Judging by your avatar, it looks like it needs defrosting.

Update
Problem solved
I have a Schaudt LRM 1218 solar charger fitted which has 2 red wires coming out. One had come out and as it's not easily seen I only discovered it after deciding the fridge had nothing wrong with it and started at battery checking all connections
Thanks to Martin Bushnell at A & N Caravans for his invaluable advice