Ah, freedom. The sweet call of the open road. Thousands answer it every summer when they climb into an RV and strike out, bound for windswept beaches, spacious skies, a brush with that purple mountain majesty. It's practically an American tradition. But as the sun sets over the fruited plain, a steady stream of Winnebagos and other land yachts drops off the highway. Their drivers make a beeline for the nearest Wal-Mart, where they'll spend the night under the glow of parking lot lights instead of under the stars. 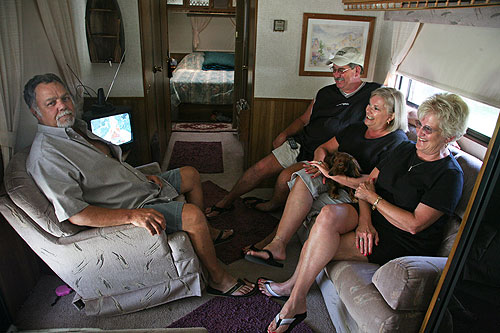 
Welcome to camping at Wal-Mart. Armed with guides found on the Internet, folks with a wanderlust can now cruise from sea to shining sea, hopping from one Wally World parking lot to another. "Everybody with an RV knows you can spend the night at Wal-Mart," said William Allie, a UPS driver from Roanoke who spent part of his Labor Day vacation snoozing in a queen-size bed with his wife, Brenda, in a Wal-Mart parking lot near Sandbridge in Virginia Beach.
Why Wal-Mart? It's certainly not the scenery. Cars whoosh. Shopping carts rattle. Wildlife comes down to a few scavenging seagulls.

The price, however, is right. Wal-Mart camping is free, while a spot at a real RV park can cost upwards of $50 a night. And then, there's convenience. Wal-Mart has 4,000-plus stores in the United States, many near major thoroughfares.

For the most part, "Boondocking at Wally World" - as it's called on the Internet - is OK with the company, which has no official policy covering the practice. Space is plentiful in the chain's vast parking lots and RVers spend money in the stores stocking their cupboards. But local laws can spoil the free ride. Plenty of cities and towns - like most of those in Hampton Roads - have ordinances that restrict RVs to licensed parks. In states with big-time motor-home traffic, such as Florida, Montana, Arizona and the like, Wal-Mart camping has drawn heat. RVers have griped about restrictions, residents have complained about slack enforcement and RV parks have accused the company of stealing its customers.There hasn't been a ruckus in Hampton Roads - a virtual cul-de-sac off the nation's main north-south travel routes. "Most people coming here are coming to stay for a while," said Phil Upton, an assistant manager at Holiday Trav-L Park in Virginia Beach.


A Wal-Mart parking lot won't do for a destination. Battery power and holding tanks have limited capacity. Longer stays require the electrical, water and sewage hookups found in the parks. Still, with local parks running chock full most of the summer, plenty of campers find themselves staying overnight at Wal-Mart, waiting for a park space to open. The Allies were doing just that. For the past five years, they've come to town for the Oceanfront's American Music Festival. Each trip has included at least one night hunkered down in a Wal-Mart parking lot. "I'd rather stay here than at a rest stop," Brenda Allie said. "Bad things happen at rest stops. It feels safe here. And the store is open 24 hours."
RVers know they're not welcome at every Wal-Mart. Some managers post "no overnight" signs in the parking lot. Security guards have been known to knock on a camper door at 3 a.m.


But many managers will give the OK, or at least look the other way. Word-of-mouth and Internet buzz supply advice on camper-friendly stores. So does a $4.95 guide from FreeCampgrounds.com: "Wal-Mart Stores That Do Not Allow Overnight RV Parking." The Sandbridge Wal-Mart on Nimmo Parkway is on the guide's no-no list. But RVer s know such policies are always in flux. The Allies just tried to be inconspicuous - no small feat in their 31-foot Dutchman. They pulled in after sunset and parked in the nether regions of the lot, as far from the store as possible. Their travel mates, Bonnie and Marvin Entsminger, slid their 29-foot Shasta right in next to them. The couples stood outside their travel trailers, sipping soft drinks and chatting quietly. The blinds were drawn on their rigs. No one pulled out a lawn chair. No one considered dragging out the grill. "You don't want it to look like you're really camping here," Bonnie Entsminger said. They planned to pull out around daybreak, with no one the wiser. "I figure I spend at least $100 a week at Wal-Mart," Brenda Allie said. "They can give me a night or two now and then." Tony Taylor, a supervisor at the KOA Campground in Virginia Beach, has no beef with Wal-Mart camping. "Have I heard about it?" Taylor said. "I've done it."

By JOANNE KIMBERLIN, The Virginian-Pilot
OP

Do Wal-Mart now own Asda? What is Asda's policy on Motorhome parking? Anyone know?

Do Tescos still allow overnighting in their car parks?
L

Yes, Wal-mart do own Asda, we popped into Asda at Rushden last weekend (very Americanised)...........didn't see any RVs there though

:Cool: We did many a night on a Walmart Parking lot. But mainly on Flying 'J' truck stops for the availability of Wifi.