CCTV reviewed now too scared to go to sleep

noticed a couple of odd things at home today, greenhouse door open, catflap that was fitted 'temporarily' 3 years ago has the fixing wedges on the floor and was very loose, put greenhouse down to me, it usually is, put cat flap down to cats who else could it be

just before bed Bev says I think the personnel sensor is off, now we have this as part security part early warning of visitors, not really put in for security but it has deterred previously sensor was turned on, but closer inspection showed the sensor turned round to face the wall , if it detects a heat source it beeps inside, which can also be heard outside when quiet like middle of the night

Now looking far more sinister, odd that we didn't hear it go off, but a review of the CCTV shows 'intruders' who went right round the property and spent nearly half an hour at the cat flap, I think we had a very lucky escape last night 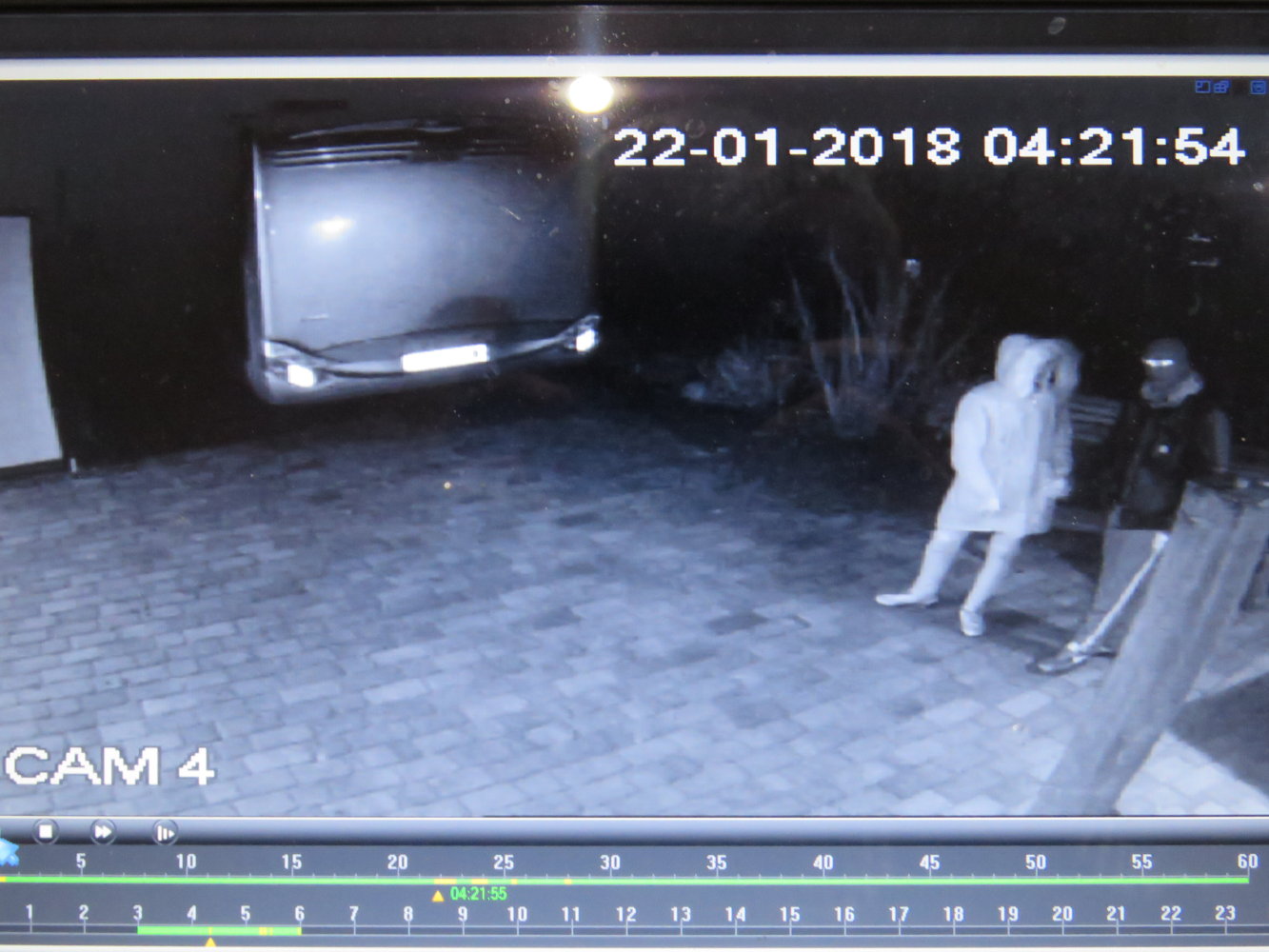 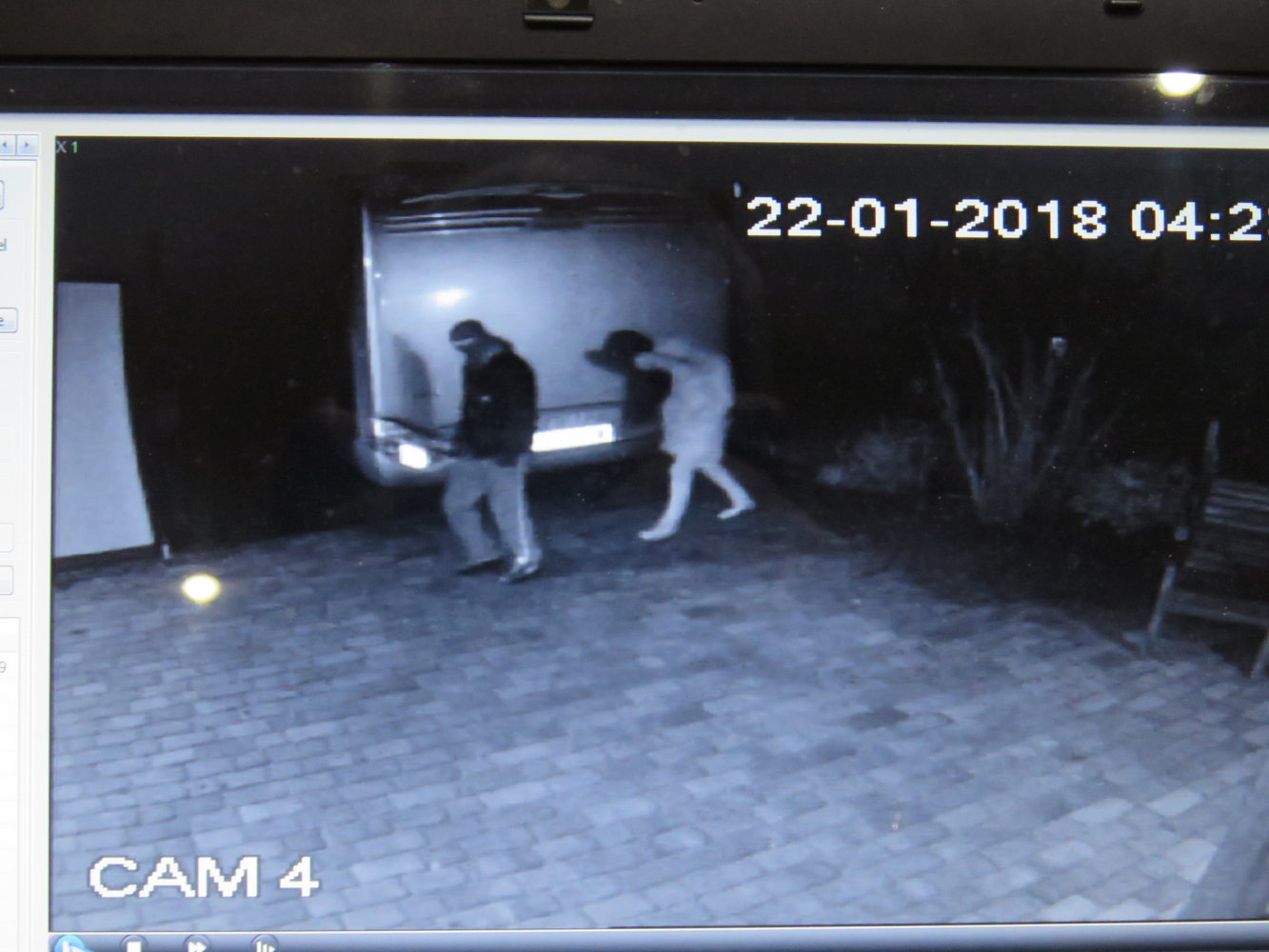 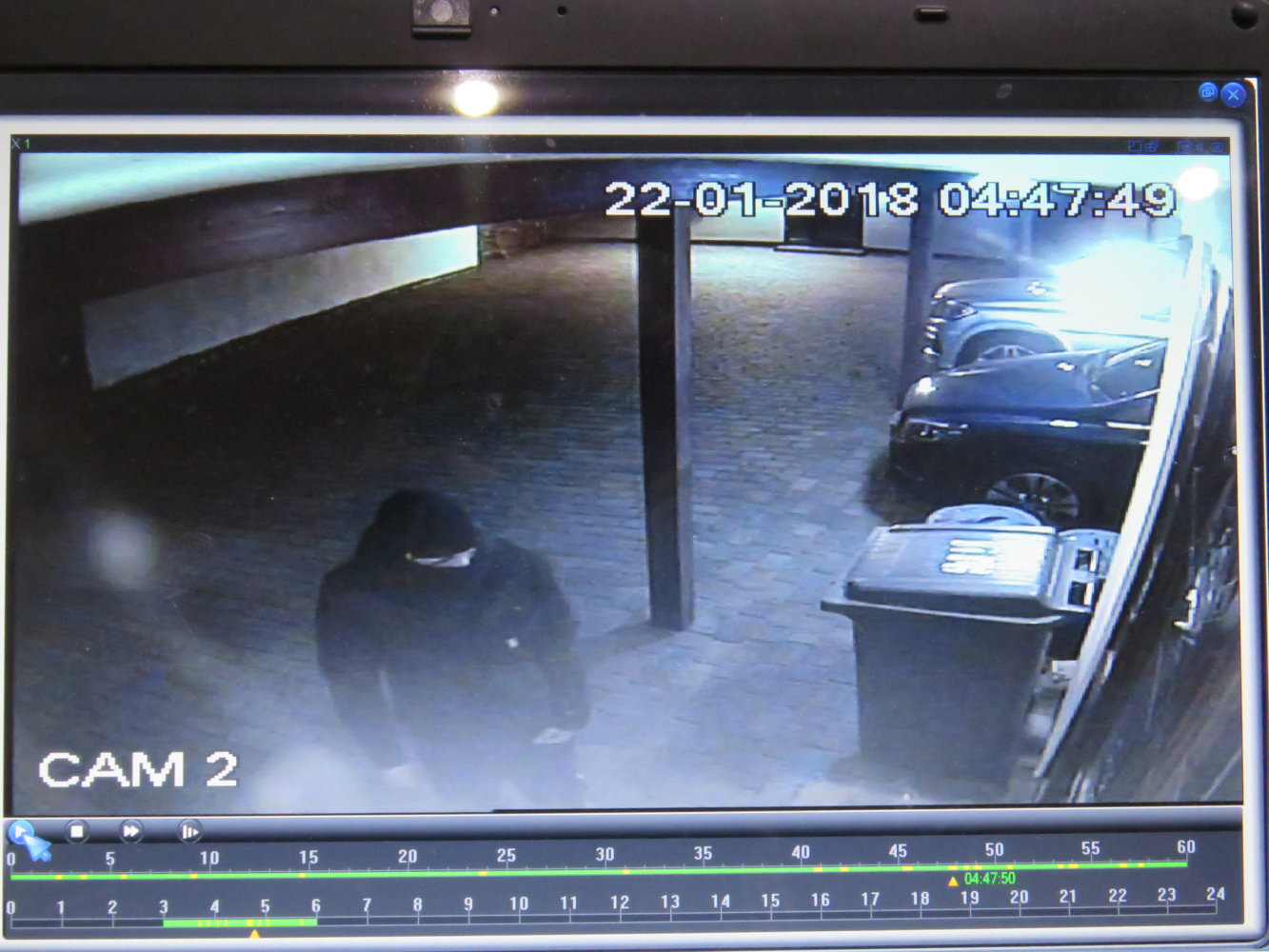 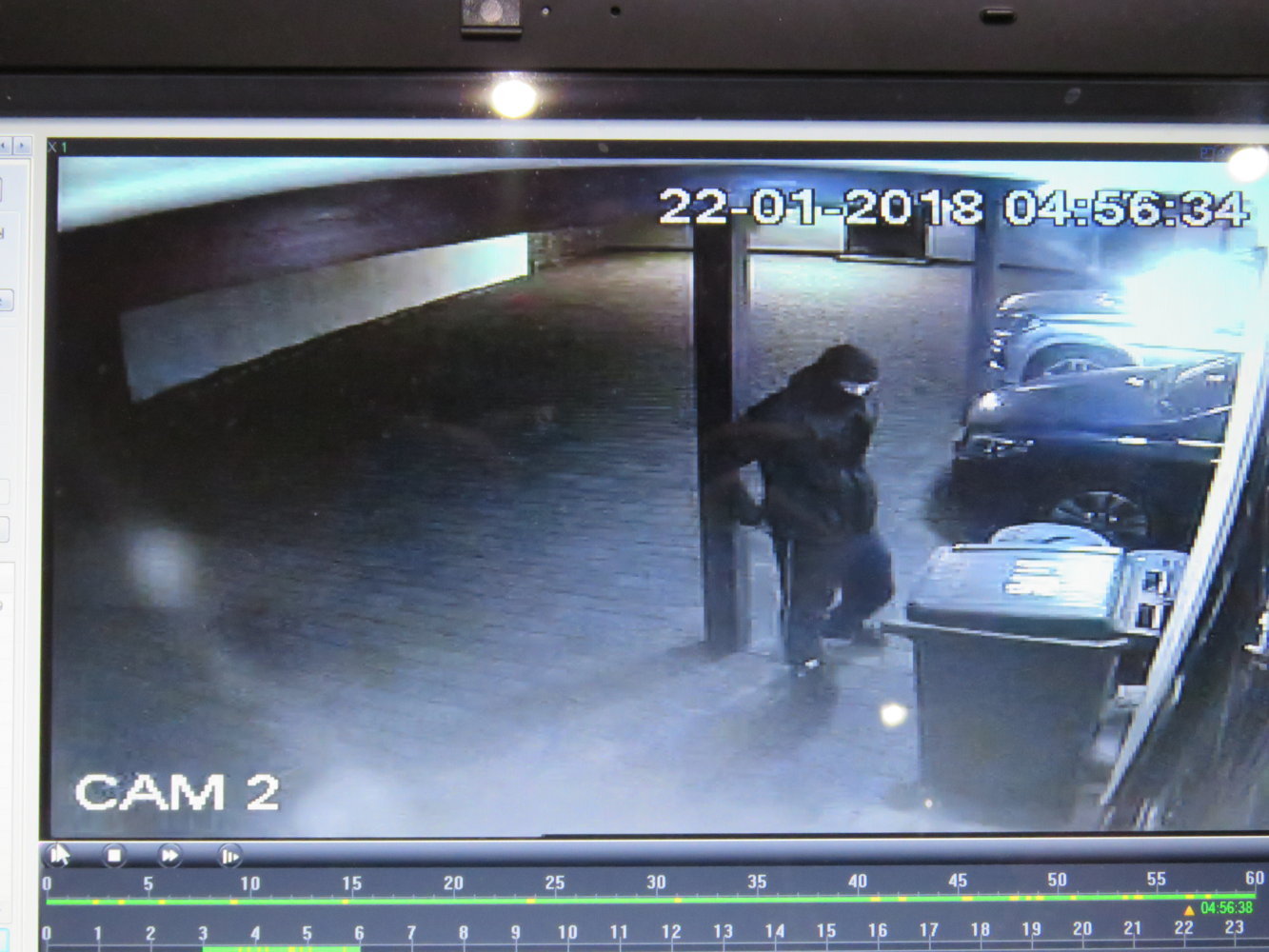 not a nice feeling at all, really worried that they might be back thinking they have nearly got in and bring tools this time, reported to police on 101 and will make door more secure tomorrow

tonight we will say a little prayer, sensor is turned back round and we will be more alert
(too scared to sleep)

Hope all stays well, you need a yappy little terrier as a friend for Lola, our Tilly goes nuts at anything within a 100 metres!

Very worrying.... you definitely need a barker! I moan that Faith barks a lot but she frightens most people that come to the door.

Hope they (looks like a male and female) don’t darken your doorstep again.

Crikey - we wouldn't sleep either! Hopefully having spent so long looking last night they have ruled your property out & will move on. Those images have made us decide to prioritise a few more home security measures. Take care & hope to hear that all is well in the morning.

Opportunists i would imagine, if they were casing you out they would be more likely try when the motorhome is away.

I also thought male and female but the 'female' looks to have large feet.

Hope the police are looking out for the bastards, they should be easy to identify with the stripes and the ripped trousers.
OP

They were probably in the greenhouse looking for 'tools' to attack the door. F..ing brazen bastards, i would prefer the scumbags to come back so you can get them caught and let you get some peace of mind.
OP

Bobby22 said:
They were probably in the greenhouse looking for 'tools' to attack the door. F..ing brazen bastards, i would prefer the scumbags to come back so you can get them caught and let you get some peace of mind.
Click to expand...


Best of that is when I went to close greenhouse looked around for possible missing stuff Bev had been chopping kindling and had left a hand axe by door. Still there but now inside

DavidG58 said:
Best of that is when I went to close greenhouse looked around for possible missing stuff Bev had been chopping kindling and had left a hand axe by door. Still there but now inside
Click to expand...

I would hate to think what i would be caple of doing if i caught some scumbag up to no good at my home.

Edit, do you reckon black head has specks on?

Eeek! I hope all is well for you.

Perhaps might be worth getting security in to advise what steps you can take.
They may well be casing the place to return at a later date.

Let’s just hope it’s a one off.

Get a couple of mates to come round and stand over the cat flap with baseball bats,, inside,,, Then let them stick there heads in!!

When we we’re burgled years ago (more than 30 years ago ) my parents were away, so my Grandad came up to our house and sat in a chair all night nursing his gun.

That is so awful. Really great you captured them on CCTV, at least it’s made you aware of the intruders.

I think you need to find out why you never heard the sensor go off, maybe add another.

The thought of being burgled is very scary. Maybe you could sleep in the van for a night or two until you beef up security. That way you might hear better or is your mum still at home?

Might give you a chance to call 999 but don’t go tackling them yourself. You are insured, items can be replaced unlike lives.

Glad you are all safe and unharmed.

Print those pictures up, as large as possible and put them up outside with a heading Police Aware.

Make sure that some are lit. I'm pretty sure the cowardly scumbags would soon leg it once they see that they've been detected and that the pictures are put on public view.

We all hate this type of crime and I really feel for you, personally I'd be waiting outside and literally break their legs for them.

Hope you guys are ok.

Time for a few more lights and sensors I think.

That’s awful David, makes my blood boil to see scumbags like that who think they can just turn up and do/take what they like.
Sad sign of the times when we have to put CCTV up, alarm systems, etc to feel safe.

I hope they didn’t return, realising it was futile but it must be worrying for next time the MH is away. I take you can get images from CCTV on your phone, etc?

Sorry to read this David,must be really upsetting,I like PP Bears idea.
Think if they know they have been sussed it will deter them,plus maybe any other scumbags with the same idea.
I have a very powerful PIR light here in PT,so bright it wakes me up,that may be an idea also if possible.

Oh no hope you've managed some sleep & all is well this morning.

It makes me so angry when I see/hear about things like this. So worrying for you both.

At least you you have some time to get security reviewed

Exp
im a not so newbie

Wire up a bird scarer a shot gun cartridge going off is enough to put anyone off.

How unnerving for you both, I'm not surprised you couldn't sleep (hope you managed to get some rest between you). It's just despicable to think that your private space has been invaded by some low lifes looking for an opportunity. I hope that whoever these 'people' are, and I use that term very loosely, are already on the police radar and your evidence proves damning. Take care and get that extra security sorted ASAP.

Near the junction of the A14 and A1, Cambs

Not a nice situation to be in David.
We used to installed these when I worked as a intruder and CCTV engineer some years ago and I fitted one of these at a friends place as part of his security system last year.

With the ctv footage police should be able to find them, I doubt if they will think to change there cloths, and will be out again another night.
OP

@CCC looks interesting, I would be worried about false alerts, certainly if using an automated reaction, scrotes are cute enough to know it is recorded I would reckon. The sensor we have works off heat, we have it set high enough to miss the cats but it is activated by virtually every visiting car, certainly postie and other deliveries, don't want to scare off the nice guys but love the concept, especially if it can be used to speak through if you see someone, that should be enough to turn them round, normally the beeping of the sensor is enough, we have reviewed 2 other known events overnight where they turn and go back, this chap was cuter, not sure if he heard the bleep (we didn't) but he crept along the wall and rotated the sensor, in daylight I intend to see if that n be done without activating it

How horrid for you both.
I also like PPBear's idea &maybe put copies in a local shop and pub?
Get something attached to the sensor that turns your bedroom light on? As well as sound to wake you up?
Most of all keep yourselves safe.

Garmin the gift that keeps taking
2