Can you decipher this for us?

MH
Burstner Ixeo IT plus 724

I've been trying to work out just how our TV system is supposed to work as we don't use the Sky box, but have to have it switched on to get freeview.

There's a Cytrac DX dish fitted to the roof and a Digital aerial too. 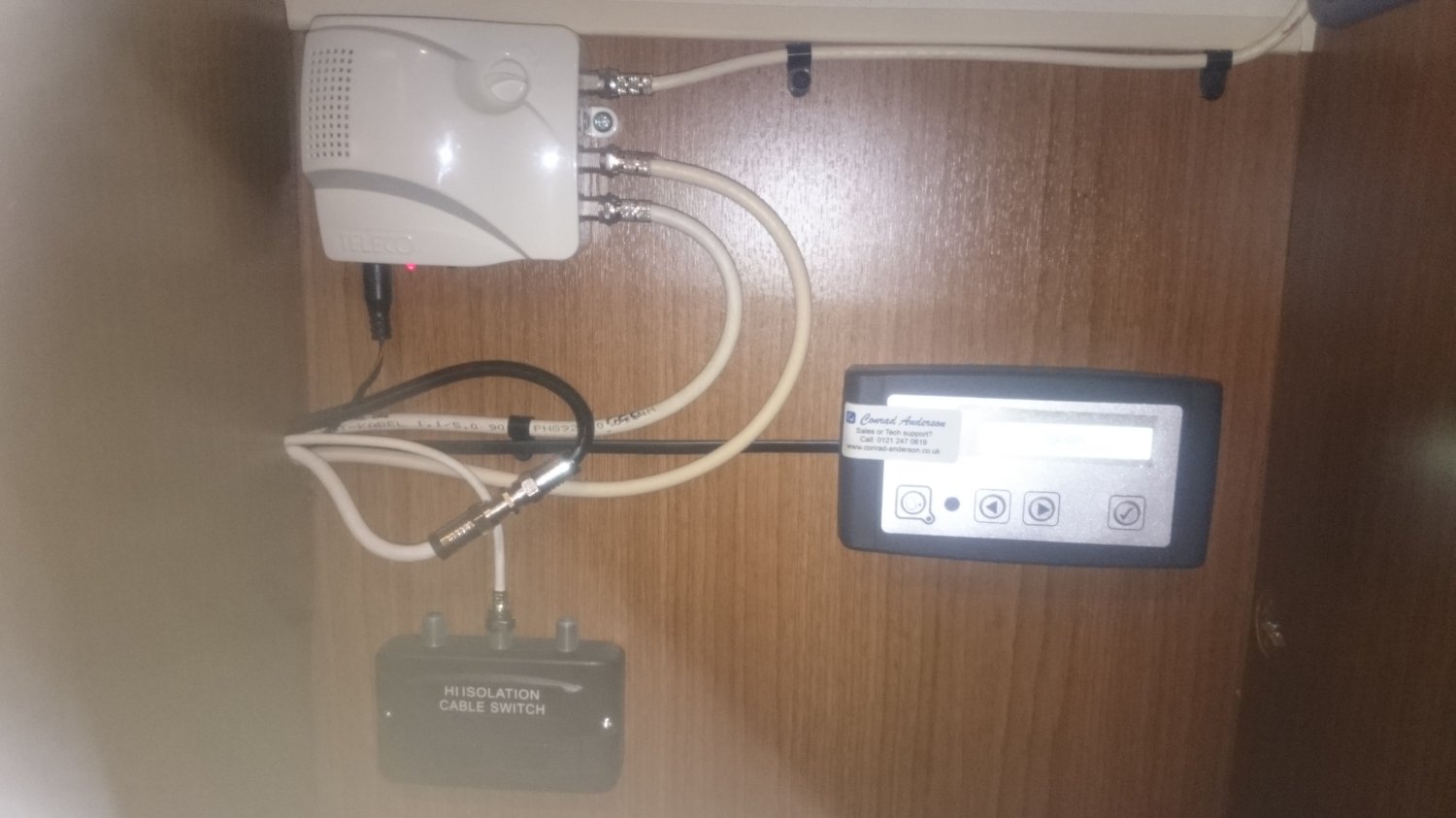 I've spoken with Pat at Oyster today and he was brilliant, talking me through re-programming the Astra 2 details on the box to the right so it now "locks on", dunno what the White box in the top left is but it draws power when 12v is on and the Black box, as Toyah would have said, is a mystery.

Moving forwards, in the bedroom there is a Cello 12v TV with a standard Co-Ax TV cable plugged into a Samson (Infra Red?) device, which is plugged into the Co-Ax on the TV, from investigations we think this is to allow control of the Sky box from the bedroom... 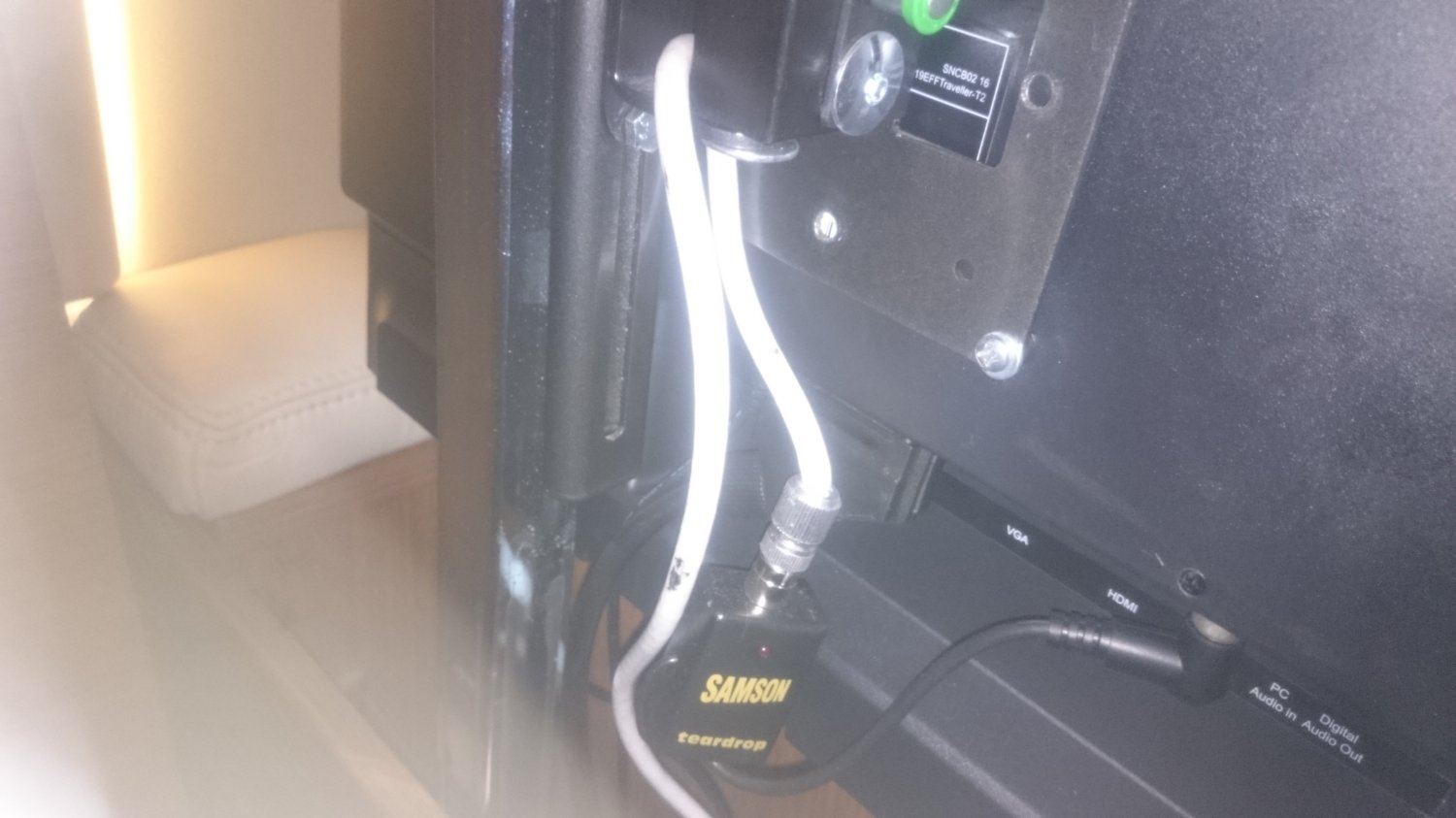 Moving forwards again, under the seat that houses the electrikery. There is a 1000w Inverter (don't know if it makes a difference but it's pure sine) attached to the twin 100ah Leisure units using battery cables. Then in the space next to it is a Sky Box... 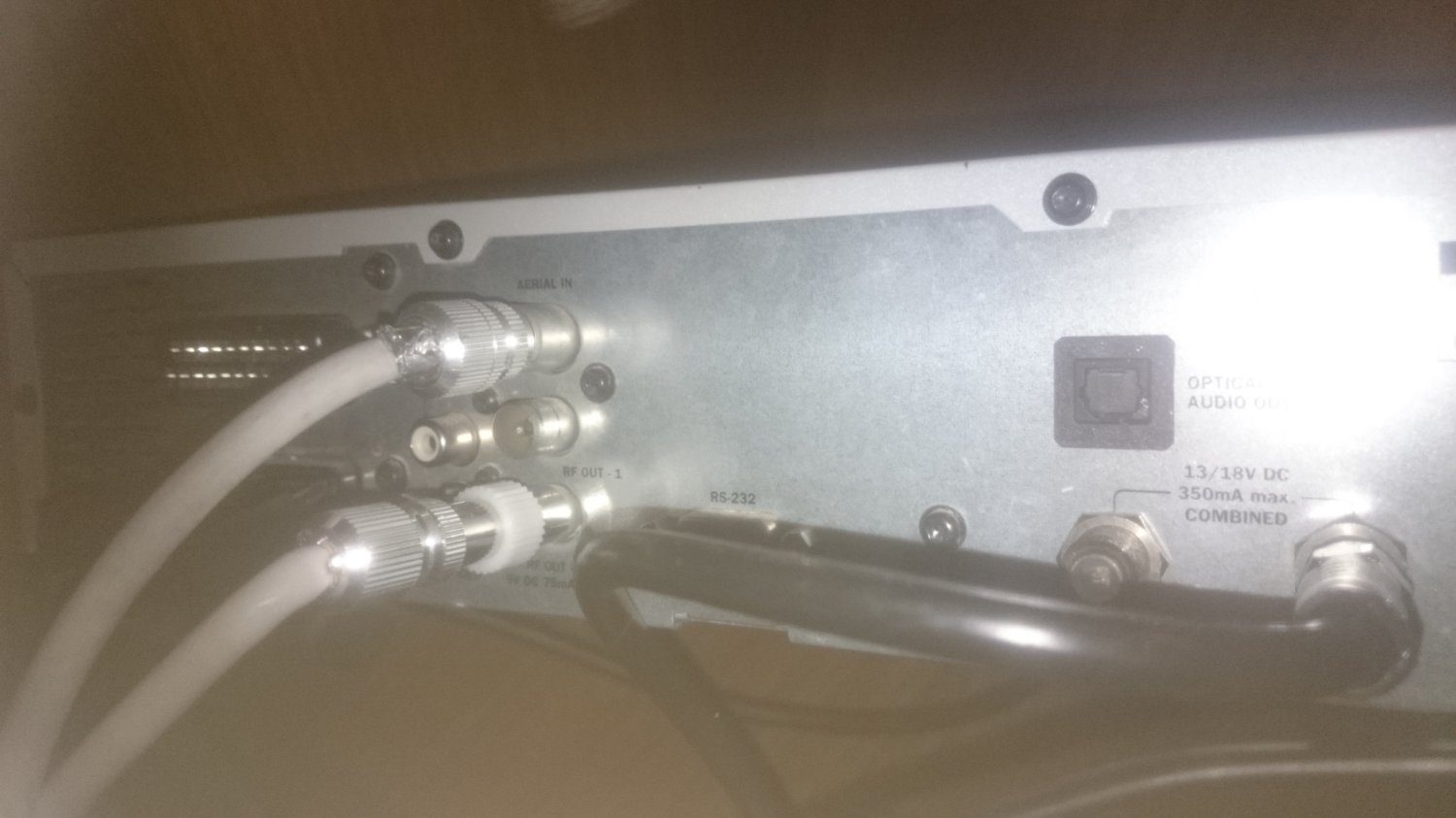 And another mysterious Box (Grey this time), although it looks like it this one is NOT powered... 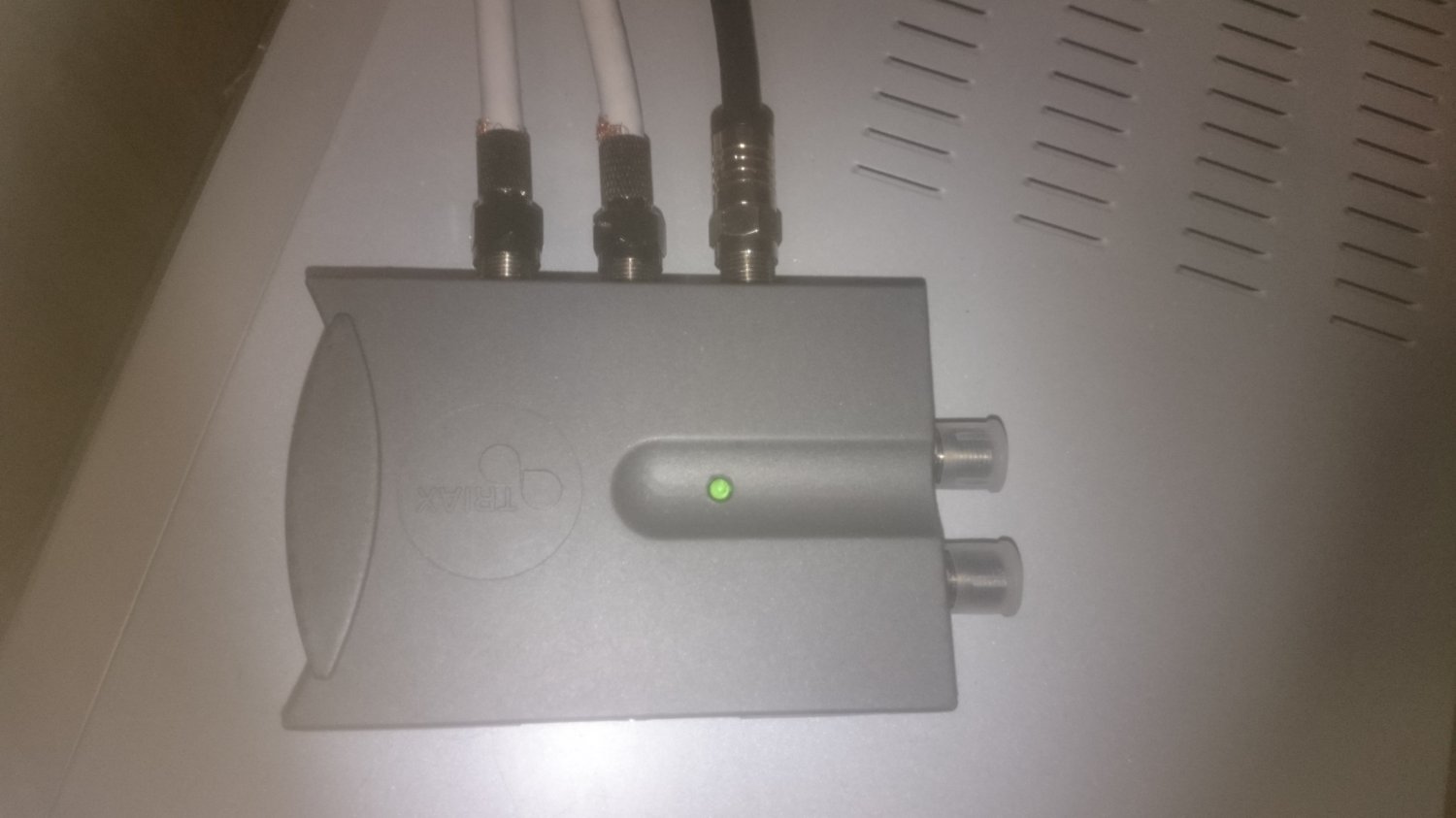 Then there is another Cello TV with the same setup as in the bedroom.

1) We've found that we cannot tune/use the DTV aerial/Freeview TV unless the inverter and Sky Box are switched on, is there any way we can use DTV without switching on the inverter.

2) Is it possible to remove the Sky Box and replace it with a FreeSat recorder.

Hi.
The white box looks like a rf amp / splitter that should be connected to the aerial on the roof. This would (as standard) feed to two Tv points in the van, it looks like it has a gain control Knob to increase or decrease the power.
If someone has added the Sky box in between one of the feeds the Sky box has to be turned on / powered up to let the signal through from the Tv aerial, no power on = no signal.
No idea what the grey box is on the wall. If it has 2 buttons on the bottom I can take a guess.
The grey "Triax" box on top of the Sky box could be a simple amp allowing sky control off two TVs. Does the input of this box go to the "RF2" output on the Sky box? If so this unit also has to be powered (by the sky box) for Tv signals to pass through.

What is the goal, to use the dish, aerial or both?
A freesat box can replace the Sky box but control can become an issue as most don't have remote Rf control.
The little icecrypt units (non freesat but very good) have a little eye you can fit.
Let me know the goal and I will advise.
Cheers

If you don’t watch TV through the sky receiver you can unplug the 2 white cables going into the sky box, making a note which is which, and join them together. This will take the box out of the digital TV circuit and connect the aerial directly to the television.

Linda and Steph said:
If you don’t watch TV through the sky receiver you can unplug the 2 white cables going into the sky box, making a note which is which, and join them together. This will take the box out of the digital TV circuit and connect the aerial directly to the television.
Click to expand...


This will work as long as no other amps are further down "the line" such as the Triax grey box, as that takes power from the Sky box for it to work.
At a guess... someone has taken the rf feed into the Sky box and then used the Triax amp to "split it" into the two TVs giving Sky (the same channel) and Digital RF to both (different channels).
Remote eyes on both TVs are likely to confirm this.
Please advise OP, I like a challenge

I've had a closer look at the pictures to identify the components in the set up.

The Hi-Isolation switch only has the output connected so isn't in use at the moment https://www.cablestogo.com/product/41015/high-isolation-ab-switch

Do you want to watch sat tv or are you happy with just DTV / Freeview?
OP

MH
Burstner Ixeo IT plus 724

Thank you both for your replies.

@Vansflyer The RF out from the Sky box does indeed go to the Grey box, which does have Triax written on it.

The grey box on the wall does have two buttons on it.

Both TV's have Samson Infra Red units in series with the co-ax cable.

Ideally I'd like to be able to remove the Inverter and Sky from the system but we would like the ability to record/live pause.

Again ideally it would be great to be able to have the choice of using the aerial or Dish (My vague understanding from reading on here, is we would need to use the dish in Northern Europe for English Channels)

Thanks for your help.

Good good...
The "Isolation" would have been used to switch the feed from the dish to two Sat receivers. Be interesting to know where the cable that is connected to it goes? As Linda & Steph have pointed out that isn't in the circuit at the mo.
Is the LNB twin feed or single?
If you want to dump the Sky box the easiest way to wire it is to redo the original wiring into the TV aerial amp and feed both Tv's with the Rf signal. This will give independent viewing on each TV of all available Freeview channels subject to good enough reception.
Then add a Sat receiver to one or both of the Tv's. Feed from the dish goes straight to the Sat box if only using one or via the "isolation switch" if using two Sat receivers. If the LNB is twin feed you can just run a feed to each Sat receiver and bin the isolation switch.
I use one of these.
https://www.maplin.co.uk/p/icecrypt-s1600chd-se-satellite-receiver-with-hdmi-and-usb-a35xh
12v Sat rec with a remote eye.
Sat rec can then sit in box somewhere close to the TV for a stealth installation without being seen. Just to mix it up I then feed the audio out from the Icecrypt box to a BT transmitter, this can then go to either the Cab radio or Bose Soundlink Mini Speaker to give me radio without the Tv on. This is in our living area where we have a small Tv.
Tv in our bedroom has inbuilt Sat rec so we just run off that.
Normal TV cable won't carry sat signals so you may need to run a feed from the dish to each Sat box of Sat grade coax, Ct100 type etc. You can combine Tv and Sat signals on one cable but it gets complicated and for the lengths involved in a van not normally needed.
I got the nipper to do a couple of line drawings and a pic of the box in situ.

MH
Don't own one yet

It looks to me as though the Cytrac is probably a twin system as one of the inputs is clearly fed into the isolation switch. That means that you're only receiving one input from the dish, possibly going into the booster, which would then be distributed to the termination points of the two outputs plugged into the booster. The two linked cables are possibly what were plugged into the A and B outputs of the isolation switch at some point however I cannot be certain without seeing the setup.
All I can tell you for certain right now is that one feed from the Cytrac is not supplying anything so even though the unit will raise and lock on it's only, at best, supplying one signal into whatever receiver you are using and the second feed (that would run a PVR receiver in conjuction with the other input or a second receiver on it's own) is just doing nothing right now.
Show hidden low quality content