I used to have a tow ball bike rack so it was easy to put a security chain around the tow bar to the bike. My new van has a van mounted bike rack, how do people secure the bike to the van when using one of these type of rack? I dont mean which alarm system.

I have a motorbike rope lock that I thread through as many parts of the bike's as poss and the rack, plus a motorbike chain doing the same, in addition I cover the bikes with a good quality cover to make things difficult, to put the cover on I have a plastic set of steps that bungee to the rack, if you want to know the type of steps just ask. What more can you do? Its like anything if they want yours that bad they will have it, I think what I do will make them look for something easier to steal.

All you can do is lockthem to the bike rack, don't use a too heavy lock as if they want the bikes they will just cut through the bike rack its only thin alloy.
C

Looked on their site could only see alarms.

SteveB123 said:
Looked on their site could only see alarms.
Click to expand...

Which, of course, you said you weren't asking about.

For our old bikes we had a couple of fat cable locks through the frames and around the bike rack, with additional U locks if we were leaving them on the van unattended. Probably actually wasn't that secure in reality, but enough to deter an opportunist.

Now we have more expensive ebikes we're planning on a getting a motorcycle chain to put on whilst parked overnight/left unattended. Plus an alarmed cable lock that we'll leave on all the time (its too thin to be properly secure, but they'd probably cut that one first so an alarm going off should at least attract attention). We'll also get a decent cover - more to keep the road grime off them, but it also means its not so obvious that they're worth stealing.

But in the end, if someone wants the bikes bad enough they'll have them - that's what insurance is for

Just ordered this on ebay:

Gets good reviews, also available from UK sellers but double the price. Going to put it in the pannier bags


yes, remove saddles before someone else does.. has a saddle nicked on the aire at Stenay ..
quick release saddles are a menace.. as are quick release wheels..

another bike stolen at Capbreton aire.. they cut though heavy motorcycle securing cable during the night.. never heard a thing.. they took my expensive Trek and left two cheaper bikes on the ground.

Reported to local Gendarme, they said the thieves work in gangs, they watch aires during the day and target the best bikes.. then come back at night.
A cordless angle-grinder will cut through just about anything.

if they want it they take it ..

So bought a van with a garage.. and still lock them up , garage door is also alarmed by Strikeback . Also have a 'bike loop' alarm for the rack if ever needed.

OR take old rusty bikes and keep the nice one at home.. it's not what we do as we enjoy road cycling as as sport, so it's more than just for trips to the Boulanger
Last edited: Mar 14, 2018

SteveB123 said:
Looked on their site could only see alarms.
Click to expand...

As part of their alarm system they supply a thin cable with a connector. I thread this through parts of our scoot. If the cable is broken/cut all hell breaks loose as it sets the main alarm off. Other than that I use motorcycle locks.

I used good quality bike locks on mine . While in a Calais supermarket someone attempted to remove the bikes from the the bike rack but couldn't .
The reason I found out was that they had removed all the bike ties before realising they couldn't get the bikes. Unfortunately , I didn't discover it until we left the supermarket and my brother law who was travelling behind us stopped us and said the bikes we hanging down from the rack. The bike ties had been left behind. :-(

A quick digression, I had a £800 bike insured with the NFU and the bike was stolen from the house. They refused to pay out stating the bike wasn't locked even though it was in the house!! I went to the ombudsman and won on appeal.

All you can do is lock it with a good quality lock . The amount of bikes I see locked with a thin cheap cable , all you need is a good pair of scissors to cut the cable .

I am thinking about fitting one of these with a backing plate and a heavy chain through it. Any comments or advice welcome. 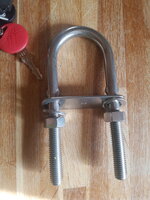 SteveB123 said:
I am thinking about fitting one of these with a backing plate and a heavy chain through it. Any comments or advice welcome. View attachment 219412
Click to expand...

The bigger the better. What will it be bolted through?
OP

Richard and Ann said:
The bigger the better. What will it be bolted through?
Click to expand...

Through the body of the van with a backing plate

MH
a class I think

I find the padlock alarms for about a fiver also fit around the headset (handlebar stem), always use it when out n about as they can see the main lock but would not notice these until it makes a right racket, just fit it on when the vehicle is stopped

We also have the Strikeback Growler with bike attachment