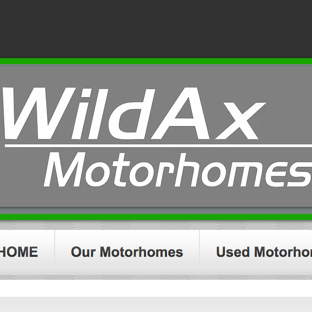 WildAx Motorhomes manufacture new motorhomes and Campervans using Citroen, Renault and Fiat vans. We also offer a "try before you buy rental service" for customers; this enables customers to try living in our motorhomes before purchasing. We have tried to make the ordering process as simple as possible so that you can ensure that you get just what you need from your motorhome. We manufacture a very high specification motorhome range from our factory in West Yorkshire with layouts for 2, 3 and 4 berth motorhome designs.

One of the main benefits of choosing a WildAx motorhome over one of the mass produced brands is the combination of quality and the ability to tailor the design to your needs. Many of our motorhomes are tweaked during the production phase to include specific desgin requirements for that specific customer. WildAx are slighly different to other manufacturers in that in addition to offering our motorhomes for sale thro

Having looked at many van conversions at the shows I finally decided to change from my pop top to one. I decided on the layout I wanted which is the one with a side sofa facing the side door and which could be used as a bed with minimum effort. Having looked at several vans with this layout I was disappointed with most due to such things as – Sofa around 3 ins too short to be used as a bed (I am only 5ft 6in!), heater and leisure battery blocking the main storage areas, Cardboard heater pipes unprotected and in storage areas, build quality. I then looked at the Constellation 3 at one of the shows and commented to the person on the stand (turned out to be Duncan Wildman who owns the company) that it looked as if it had been designed and built by people who actually used them, which turned out to be true.

I decided to do a hire of one to try it and confirm to myself it was the way to go, also to think about any extras I might want. For the hire which was for two nights in December 2013 I took the hire van to the Caravan Club site at Poolsbrook. I found a few minor non standard changes I would like such as an extra 12v socket near the table for my laptop charger, not having the TV bracket fitted also the Truma heater control, being above the side door, was out of reach from the bed. As this could not be moved to within reach a controller with timer was agreed on.

On returning the hire van I met with Duncan and agreed the changes and the van was ordered with a delivery date of the 1st August 2014. In mid July I was in contact with administration staff at Wildax and insured the new van for a few days before 1st as arranged with them. I later found out there was going to be a delay of a week in delivery so I then had to MOT, retax and insure the old van as these were all due to run out on the 31st July. I also missed out on a planned trip due to this delay. I feel there was a lack of communication within the company which made the problem worse, however suitable compensation was agreed on.

The van has proved very successful and in the 3 years has been used for 300 nights and covered 18,000 miles mostly in Europe staying on Aires and Stellplatz also at shows in the UK. The full facilities in the van have been used for all but a few nights as I cannot see the point in walking to a shower block even if there is one on the site.

A few minor issues have occoured such as edging strip on the tables and kitchen worktop lifting, an LED under the cupboard failed, the drying rack attached to the sink cover fell off. These have been fixed without problem during habitation checks.

The habitation checks have been done efficiently and any minor faults have been fixed without question. The van even gets washed.

If I thought of changing the van I would certainly look at what Wildax were building at the time. However I must admit I am not keen on the darker finish being used at the moment and also think the larger fridge spoils the storage and usefulness to me.

Hi.
Due to me pressing wrong buttons on the last two review attempts,here goes.
Wildax Europa,had it three and a bit years,waiting until Christmas,when we trade it in for a Wildax Constellation3. We have a friend who was looking to get a new m/ho,they came and sat in ours,showed them all the bits and pieces,and how it changed from day to bedtime use,they have one on order.
Nothing has ever been to much trouble for the "Elland" crew,when i wanted to take the mountings for the table,off the wall behind the drivers seat,i rang Elland from Porty,and spoke to Duncan,Mr Wild. Told him what i was about,and if i went ahead,would the cassette toilet fall off the wall in the shower/toilet room,that backs onto this wall.
He said. "No,but hang on,i will nip down into the workshop to check",heard his progress down to the w/shop. He then said."Go ahead,the loo wont fall off,i have screwed enough together in my time,to know,but just had to check"
This last time,back in the UK,had water coming from under the sink,checked what i could,could not find where it was coming fro,so rang Elland,got put through to Danny and explained,he asked where i was,i said Derbyshire,he then said. "Thats only an hour and a half away,bring it up and we will have a look." That we did and he fixed it,having to drop the tank,(While off,washed it out !) and refixed it,while first wife and i sat up in Morrisons cafe,having dinner + pud,looking down into the yard. This was free,even when it was over three years old,and we had NOT ordered the Constellation3.
Lots more to tell,but if you PM me i can add the rest.
Love it/them to bits,go and have a look at them,if you can,ring Elland and go and see them,even though its in Yorkshire,they don't bite. Being as we live in Portugal,i have to have something that does not require battles with faceless companies,i we have found owning a Wildax means we don't have to. I think Minxy Girl told us,they have an outlet in Spain now, i did mention that we had the land available,should they branch out in Portugal,and i did get a reply
Go and see,get it Bought!! You know your worth it
Tea Bag and First wife. Happy Customers