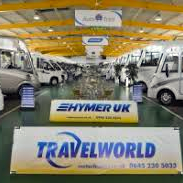 My current van was purchased new in April 17 when I part-exchanged another Hymer. The process was simple and the sales experience good. However, the aftersales has been worse than poor and I say to you all - go elsewhere for your purchase.

I have been back to them many times, the staff on an individual level were always friendly and polite but the service is poor.

The van was about 3mths old when the fridge packed in whilst in Germany. We made our way back and the van was off the road for 2mths waiting for parts.

On 4 occasions we've been in France (in the rain) when our wipers failed. The 1st time it was fixed in France. The 2nd time when back home I emailed them, they requested a photo. I sent them a photo and they said that they would order the motor. The van was later booked in for this and other work, but on collection, the wipers were not repaired. I was informed that " yes it is the motor and we will order one". So, back again for it to be fixed, round trip of 250 miles. The 3rd time was with the same fault, again back to Travelworld. The 4th time was in March this year whilst returning from Spain. I CONTACTED ANNABEL EDWARD'S IN MARCH, A WEEK BEFORE LOCKDOWN AND SHE IS YET TO GET BACK TO ME. I would remind them that according to the MOT, wipers are a safety critical issue and an MOT failure.

In 2018 the van was at Travelworld when amongst other things they did work for a Fiat recall. That summer I travelled to France to follow the cycling. Whilst climbing Alpe d'Huez, on the 21st hairpin the engine shut down. We waited 3hours for a breakdown, blocking the road and causing chaos. When we eventually got it fixed in Grenoble, they informed us that whist doing the Fiat recall, Travelworld had not refitted a jubilee clip properly and the engine had lost all its coolant!!!!!!

Oh, did I forget to mention 2019! Throughout its short life, the van has had problems with the habitation door. It has been into Travelworld several times and Hymer are so aware of the issue in many of their Van's that dealers retro fit a door-straightener. During 2019 I raised complaints about the door and got nowhere. In desperation, I left a poor review on Google maps and then in September whilst at the Spa GP the door failed and locked us in. Travelworld then collected the van and had it for 2mths to fix the door. Yes that's another 8 weeks to the day off the road.

Now at this point I'm feeling, nevermind sounding like a moaning old git.

I know that van's are complicated and when buying new, I expect snagging issues. There are other minor problems that I've had and not mentioned, I expect such faults. But there have been several issues that have caused significant problems and they have been compounded by a very poor service.

Hammie
I had a row with them years ago and ended up telling the man in charge that his staff needed customer service training and he needed counseling for extreme narcissism. I stand by what I said then. I read a piece saying Hymer were looking to increase dealership in the UK unsurprisingly. It will be interesting to watch the merger of Hymer and Thor in relation to future slideouts in Europe and American led customer service.

Very sadly disappointed with the customer care as a result of issues after what turned out to be poor repairs. I wont go into any more detail than that in this review other than to say I will not be using the company again. Travelworld are aware of this and know why. One of their technicians was very helpful however and credit should be given for him but overall our experience is not good

Hammie
I thought their attitude was poor and arrogant several years ago. It seems nothing has changed.

Kirsten
I cant seem to put another review on the Travelworld site... but after pleasant experience buying our motorhome I am VERY concerned that when we had continuing problems with the Tambour door they have quoted the replacement door as costing £1927.72 inc VAT.
We have checked with them -twice- and they confirm this price is correct.
Just paid for the same part - ordered from Hymer Germany from Lowdhams Notts priced at £587.42 + vat
Would now give Travelworld one star at most ! I can only assume they dont want the bother of ordering items - just interested in the big money selling vans ?

Took out old Hymer in to have the rooflight mended and saw the New One- and as they say the rest is history.
The new-to-us b544 had a lot of minor things that needed fixing; and the handover day took ages while they fixed some of the faults they had not done beforehand - but they had not fixed all of them so we had to arrange bring the van back.The staff were helpful and polite,the handover was excellent; we were met at the train and driven to the showroom to pick up the van. We were there most of the day and left much later than we had thought we would [but to be fair we were delayed on the day by the huge amount of stuff someone had placed into our old motorhome over the years ]
We have just taken the van back to get the outstanding things fixed [parts needed to be ordered] and overall we are very happy with the experience. Travelworld fixed all the little niggles [broken catches] as well as some bigger faults - we have not had the engine temperature sensor fixed as they needed to order a part- which is a slight disappointment as we had flagged this initially and it means another trip up the dreaded M6 to get there . The van was cleaned outside when we went back to have the snagging sorted, the final repairs took all day -but there was food available in the showroom and it was comfortable and quiet [ we worked on computers while waiting]