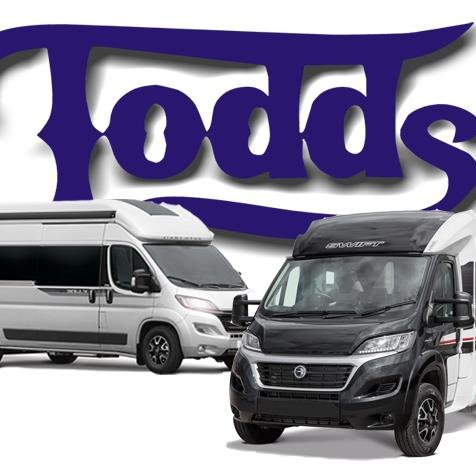 Todds has the largest indoor collection of new & used Motorhomes in the UK; Up to 100 vehicles permanently displayed under one roof.

Had an ongoing problem with the Truma Combi 6e heater. Tried all sorts to identify the cause including contacting Truma but to no avail. Took the van to Todd’s who fitted a new heater blower but this didn’t cure the problem. After further inspection Todd’s finally identified the cause. The workshop refitted the original blower and deducted the cost from the new bill. Excellent service very friendly, trustworthy and competent.

pisteman
what was the problem?

We visited Todds on a Saturday to get an idea of what sort of Motorhome would suit us. Walking around their huge showroom we must have sat in over 25 vehicles. We kept coming back to the same 2009 vehicle.
The salesman caught us between viewings, passed us his card and told us he was in the office if we needed him - no pressure, no pushy sales.

We were sitting in 'our' Motorhome when the lights went off and we realised that the place had closed and we were the last people left!

A quick chat at home that night and, if they had been open, we would have bought the vehicle on Sunday. I arrived at Todds at 9am on Monday and bought the 2009 Swift. There was no discount on the price but the salesman included two new gas bottles, the pigtail hose, a 25m EHU cable and fitted a reversing camera and display. The vehicle was serviced, MOTed, and valeted ready for our collection.

We had noticed that one of the lights in the Hab section had the glass missing on it. On collection I found that Todds had replaced all three lights in the saloon section so that they all matched!

Great service. Nice people to do business with.

I bought my first MH from Todds. It was 12 years old. When I collected it they pointed out a repair to the (galvanised) grey water tank, said he they weren't very happy with it and that should it give trouble they would repair it.

During my first trip the clutch began to drag & throughout that holiday it became apparent that it only happened once the engine was thoroughly hot. When I returned I rang the dealer, arranged a date, took it to them, and returned home (50miles) in a courtesy car. They contacted me after two days to say that the vehicle repair place they use could find no fault but gave me the phone number of said establishment. I rang them and explained that the fault only occurred after at least 20 miles of driving. The following day I returned the courtesy car, collected the van with its new clutch, and drove home happy.

Around a month later I noticed a drip from the grey tank, contacted the dealer, was told they would be in touch once a new tank was sourced. After a few days they were in touch to say CAK tanks could supply one the right size. I asked them if it would be OK to send it directly to me to save me the 100 mile round trip & they said that would be OK. They didn't need to see the leaking tank.

My last issue, probably two months or so after purchase was a leaking engine radiator. Again I contacted the dealer who asked me how I'd like them to deal with it. I said I'd like you to accept my word for the fault, allow me to purchase the radiator locally, and allow me to fit it myself. They said that would be fine & to simply send them the invoice. I did, they paid, one happy bunny.

Just for emphasis: the van was 12 years old when I bought it and was the first leisure vehicle of any kind that I'd bought from them.

We visit them regularly and continue to be impressed. Their stock area is indoors, all vehicles for sale are unlocked and there are no 'hovering' sales people. They have a very well stocked Accessories Shop.