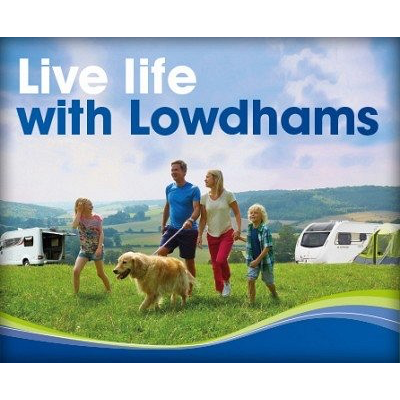 From our beginnings 50 years ago on a small three quarters of an acre site selling caravans, Lowdhams have always strived to make the “Lowdhams Difference”. Today, with two sites (one in Nottingham the other in Huddersfield), Lowdhams is the premier retailer of motorhomes and caravans in the UK. And with every motorhome or caravan we sell we strive to bring our customers an exceptional experience.

To say Lowdhams supplies high-quality motorhomes and caravans is very true. That’s the essence of what we do – but it barely describes the complete picture.

Our sites have become a beacon for motorhomers and caravanners everywhere. Why do they insist on Lowdhams? Because they know they can bank on sincere service, a welcoming environment and at the Nottingham branch you can even have a superb cup of expertly prepared Illy coffee!

We’re not just passionate about motorhomes and caravans, but everything else that goes with them. We also offer a selection of accessories, awnings and parts to satisfy our customers.

It’s not unusual to see people coming to Lowdhams to chat, meet up or even stay over on our rally field. We’re a motorhome and caravan gathering place, and we couldn’t be happier about it. Get to know us and you’ll see: we are so much more than what we sell.

We’re passionate about sourcing the finest motorhomes and caravans, preparing them with great care, and caring for the people who buy them.

We ordered our Sunlight T67s from Lowdhams at the 2019 motorhome show with a provisional delivery date of early February 2020.We all know what happened then so on the 3rd September we picked it up all the time being kept informed about it's progress by our salesman.
We were very happy with the deal and discount also the part ex figure offered for old van ,although it has to be said trying to squeeze extras out of them was like getting blood from a stone( or maybe I'm just a bad Negotiator?).
The hand over was one of the best I've had everything explained ,all questions answered fully no pressure to leave first class.
Unfortunately the van developed a fault on the second outing ,rang the service department sorted a time to drop the van off for repair which suited me despite the workshop being busy no fuss on problem just good service.
All in all A good experience.

Looking for our first motorhome after 2-3 yrs of drifting round dealers and the NEC we settled on the layout we wanted, and at the NEC we saw the model we wanted (Elddis Enccore 255) but it didn’t register at the time as we’re looking for a used van. Any how we went to lowdhams one Sunday to look at a 10 plate dethleffs tranny based mh, it’s was in our comfortable price range and after an hour we both agreed we could “live” with it (val just wanted a motorhome and I liked the price. I said let’s have a walk round before we get someone and so we did. Halfway round the lot there was a used Encore 255! We went and grabbed Joe from the sales team who was fantastic, never pressured us and guided us with things we might need inc solar (which was thrown in) and the deal was done. On pick up the handover was thorough and professional and off we went!
There has been a few problems (one of which was down to Elddis design) and lowdhams have stepped up (and over) the plate to sort things out.
Up to now I can’t fault them and wouldn’t hesitate to recommend them, which indeed I have, my cousin has bought a brand new one from them too!

We bought a two year old Chausson from them, and the buying experience was fine. The salesman was pleasant, smiling and personable, but was rather more interested in making a sale than in making sure that we were buying the right van for us. But that's the way it is nowadays so no surprise there. We payed extra for the Gold warranty which gave us a warm glow that we would be looked after by Lowdhams for the following three years.

On our very first trip after picking the van up, we were on our way up to Scotland to do the NC500 and had stopped at a pub near Nottingham, where we discovered that the drawers under the sink were filling up with water. We found that the plastic sink trap/connector was split and every time we used the sink, water was pouring out. A quick phone call to Lowdhams was made with the expectation that a speedy fix would be offered. After all, we had only had the motorhome for one week, and we had the Gold warranty. We were told we would have to put in a claim with a third party insurance company, and that once they had approved the claim then Lowdhams would be pleased to do the repair. Well of course they would. After all, they would be payed for the repair by the insurance company. It was then that I realised what the much vaunted Gold warranty actually was - a means by which Lowdhams offloaded all responsibility for after sales care to an insurance company while benefiting financially from customers returning their vehicles for warranty work. Lowdhams claimed that the insurance company would come back with permission to fix the problem within hours. In fact it took four days, but in the meantime after several acrimonious and heated phone calls to their service manager he very reluctantly agreed to pay for the repair against an invoice. We actually had the part replaced by a dealer in Stirling, Scotland.
This was just the start. We had been concerned by the poor performance of the fridge/freezer during our Scotland trip and had logged our concerns to the Lowdhams service but had been told it was all perfectly normal. We had also told them of a leak from under the water tank into the main cabin, which we were assured would cause no damage. We were then given a date to return the van to have these and some other minor problems fixed. The best they could do was in over three months time!
In the meantime we took the van to Spain on the Santander ferry for a touring holiday. We lost two lots of food from the freezer as it simply would not hold a temperature of below freezing. Calls to Lowdhams were met with the news that we would have to return to the UK as the warranty only covered work done in the UK. Bear in mind we had only just spent nearly five hundred pounds getting down to Spain. Finally, again after several heated calls, they agreed to pay against an invoice to get the flue cleaned (which fixed the problem).

Would I buy from then again? What do you think?