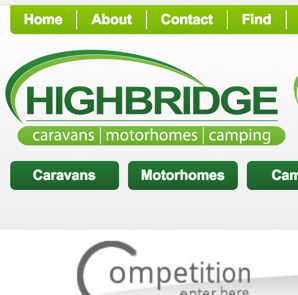 Highbridge Caravan Centre is a family business developed over 50 years. As one of the largest outdoor leisure dealerships in the Country we owe our success to an emphasis on exceeding customer expectations.

Customer care is the backbone of the company and the continuous commitment to customers long after they have picked up their purchase has resulted in numerous awards and a very loyal customer base.

Providing you with wider variety has been Highbridge's aim from the beginning and now you can choose from a huge selection of leading manufacturers tents, trailer tents, folding campers, caravans and motorhomes..... all at one site. So before you plan your holiday this year, make sure that you plan a visit to Highbridge...
Share:
Facebook Twitter Pinterest WhatsApp Email Share Link

I bought a Rapido Dreamer D55+ from Highbridge in November 2018, having expressed interest at the October NEC show. My sales person Lee was pleasant enough although it took some tough negotiation to get a half way reasonable part ex price on my 2017 Autotrail Imala trade in and the only extra that they were willing to throw in was a Fiamma awning. The van arrived in early December and we booked a handover date that was convenient for the installation of a Growler alarm the following day down the M5 at Vanbitz. The part exchange was quickly taken care of and we moved into the handover phase. Now I realise that December weather can be bad, but I had assumed that handover would take place inside a dedicated bay with shelter from the wind and rain. Unfortunately, this wasn’t the case, and we were placed in the care of a lady who clearly had no knowledge of the Dreamer D55, as she was unable to answer basic questions and didn’t know the location of many of the key systems on the van including the gas isolation manifold, and she was unable to explain how the over-door control panel worked. Having had gas system problems on our previous van, I specifically asked if the gas system had been tested and was fully functional. I was assured that the van had undergone a rigorous PDI and there would be no issues. So we had a 30 second walk around the van in a gale with horizontal rain and then sent on our way - we had to pack the van from the boot of the car in their front car park, trying not to get the interior wet. As others have noted, there was no ‘housewarming’ gift or even gratitude for our business.

After driving to Cornish Farm, I set about connecting a gas cylinder to the regulator and checking the gas system. Nothing, not a sausage. It didn’t matter how much I pressed the green reset buttons on the hoses and regulator, gas would not flow. The Truma 6E went into lockout because of gas failure and I couldn’t even make a cup of tea as I didn’t have an electric kettle with me. Fortunately I managed to get the Truma working on electricity and the following day after having the alarm fitted, I headed back to Highbridge to get them to look at the gas system. After quite a bit of investigation by the technician, he found that a test valve in the system had been left closed when the gas checks were done and apologised profusely.

Some weeks later, Highbridge contacted me to say that there was a Rapido recall on the van, and booked me in to have the repair done. I duly drove from South Wales to Highbridge and waited in reception for a couple of hours before they got around to looking at my van. I was then informed that the system had already been modified at the factory and everything was fine with no need for any work. There was no apology, no offer to reimburse my expenses for the wasted journey just a reminder to book my hab check early as they get booked up.

I have since had some minor warranty work done when I took the van for its hab check, but there was a problem with the Remis cab blinds that they couldn’t complete in the time allotted. After suggesting that I leave the van with them for 2 weeks (to complete a job that probably won’t take more than 2 hours) I suggested that they send me the parts and I could do it myself. They readily agreed and the parts have now arrived so I’m able to do the job in my own time.

In my opinion the overall dealer experience was poor, and I would be reluctant to give Highbridge any more of my business.

Reactions: SpeedyDux and mikebeaches
T
Tony50
Not would I, it's a pity , because it has good facilities lovely site , plenty of choice, just needs some one to sort it out, it's down to Management, like lots of Companies when they get big the Owners don't know what's going on,

We recently collected a used low profile van from the Devon branch and could not have had a more pleasant and rewarding experience. The sales team were polite, hands-off and cheerful, letting us take our time and providing any information needed when asked, then leaving us to look around in peace.

Having negotiated a decent deal which included them supplying and fitting a new awning and installing a refillable gas system, we also gave them a snag list of small items we had found and showed these to the technician who would be doing the job.

To our surprise, the technician found and fixed a number of other issues during the habitation check and PDI that we had not noticed, including a new spark unit on the oven, making good some amateur wiring to bedside reading lights, replacing a couple of dicky switches, a brand new Bluetooth stereo, a brand new leisure battery and a new RCD breaker.

The van had to go to the Somerset branch (they plan to increase garage space in Devon) for mechanical checks and a full service and MoT, which included a cam belt change as it was about due anyway. We had not realised this and the fact that it was done without fuss or fanfare speaks volumes.

On collection, the same technician (Ben) did the handover which covered absolutely everything in a clear and unhurried manner. The sales team also threw in a number of useful items from the shop free of charge.

We did a couple of days away and found that one of the gas rings is reluctant to light. On reporting this issue the service department booked their mobile technician to come to the house to investigate and fix the fault. All this is part of the comprehensive 12 month warranty on habitation and mechanicals that comes as part of the deal.

The sales team (Luke, Jody and Pete) were excellent and Ben is an outstandingly wonderful person who just loves his job. We cannot recommend Highbridge too highly for anyone looking for their next van.

Reactions: Kev and Carolyn
T
Tony50
That's the service you should get, and thank goodness you did, having confidence on a Dealership is paramount, Sorry to say we didn't get that at there Highbridge depot, I wish they would let me in there undercover for a fortnight to sort it out
Tony

125BEER
Picking up ours on Wed??
Will update

Bought a Adria Sonic from the guys down in Devon but picked it up from Somerset.

The A class was ordered from Devon branch . The sales guy was a real gem to be honest. We have purchased from the internet before and purely on a picture! This was how this had to be done this time around too. I had seen the motorhome previously on a different web site and decided that it was the one I wanted. I phoned and spoke to the guys down there who gave me the confidence to purchase over the phone!
Silly? No ..not at all. The deal was done and we arranged a collection from the Somerset branch purely because it was closest at the time. If there was something to complain about it was the lack of a good clean up at Somerset and there were a few faults that needed sorting before we collected it. However Unfortunately ...they were not!
That aside..after speaking to Simon Wilson from Somerset branch ..it was sorted and although a few hiccups initially..we are really pleased with the outcome.
If the deal was done with the Somerset branch in the beginning i"m sure it would all have been sorted beforehand as regards the niggles. That said..praise where praise is due...Izobel Wooley is an excellent communicator and sorted out some of the issues we had initially. We are now really pleased with the purchase and we also feel confident with the HIghbridge Group that we can always get something done or sorted as and when ever a problem arises. Would we buy again from there? Yes with out hesitation whatsoever.