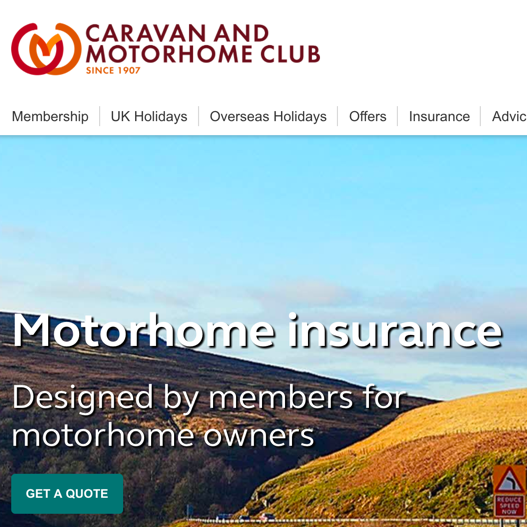 Take out motorhome insurance today
Designed by us, especially for you, keeping motorhome owners in mind.

We shopped around for insurance on the MoHo when we imported it into the UK. We had been living in Germany where we were covered by a German company, but as we were repatriating and the policy was due for renewal, it seemed simpler to buy a UK policy.
CAMC were the best for price of several I checked and a very good price if I fitted a tracker. So, we bought their policy, fitted a tracker and we were covered as soon as we had imported the van from Germany.
As the vehicle was an import and at that time without DVLA registration, they agreed to insure it on chassis number for 14 days, with the proviso we didn’t use it on the road. When it became apparent that we were going to overshoot the 14 day limit, I rang the CAMC call centre explaining we were going to run over by about ten days and would they provide just a simple theft and fire cover pending the DVLA producing the registration number (we were not driving it on the road at this time). The call handler said he would contact the underwriters but their response was to cancel the policy by writing to me saying the 14 days were up. They refunded my payment less time covered.
But then, a week after that, a representative rang me asking if I would like to insure through them after all, they had perhaps been a little hasty and the person I had spoken to on the phone had followed the protocols too strictly by not speaking to the underwriters; he had looked at the flow chart and decided that there was no point calling them, our criteria for extension did not fit! She said he should have spoken to them and they would have covered us…
Obviously by this time, we had cover with another company, NFU, who were quite happy to take the van on, on a chassis number pending registration. What was really frustrating was the lack of flexibility demonstrated by the CAMC chap I spoke to, when looking at the follow up call, the company clearly wanted our business.
As a note of interest, German insurance companies insure vehicles on chassis numbers and not registration numbers, as there the registration number belongs to the person and will move with them onto their new vehicle!

Didn’t get renewal notification until after insurance had expired.
Had to get replacement glass and this took numerous phone calls being handed off constantly. There was no overall control of the incident. Just given a number and left to fend for myself.

Just had my renewal through. There was an increase of around £25 this year. The risk is exactly the same as last year, the only difference is that insurance premium tax has gone up by 2%. Not happy, I phoned for an explanation and was told that this was the best price the insurer would offer (same company as last year). I protested that This was hardly acceptable given no change in circumstances and only a small rise in tax and the Club agreed waive the £10 renewal fee thus making my total cost £215. So happy with that i will renew with them. My windscreen claim did not make any difference and everyone i spoke to was polite and helpful as far as they could be.

Hi Guys. I will be returning to the UK in April after working in Dubai U.A.E. for 20 years. I would like to insure a new Sunlite Cliff 540 xv on my return. Can you please tell me if this will be possible. Thanks, Mike.
Read more…