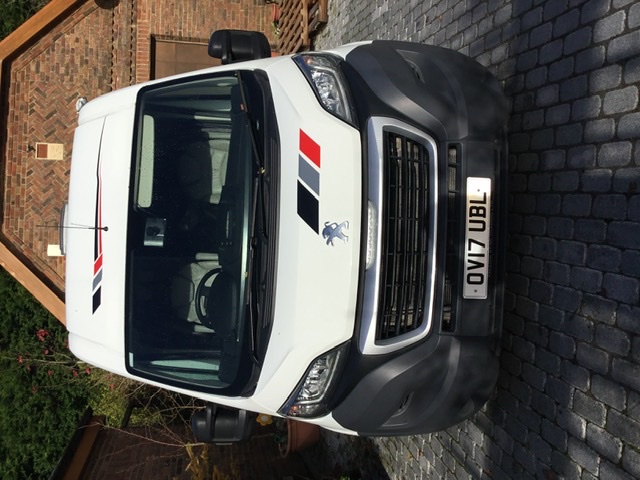 Status
1 member is watching this ad

Selling my Peugeot Boxer 335 Pro L3 H2 Blue HDI 2017 It has 82000 on the clock. Conversion completed in September 2020. It has been reclassified as a van with windows and can be used as a campervan. When it was weighed after completion it showed a 3180 kg It had a full service in the spring of this year with the cam belt being changed. It has done about 350 miles since the service.

The list of what I have fitted to the van is extensive. All items were bought new other than the awning. The cabinets and shower room has been built with laminated lightweight plywood.

Starting on the roof: 2 of Maxxfans with remotes

Under the van there are the clean and grey water Barratt Tanks. Also under the van is a fitted LPG 20litre Gasit gas tank. New suspension springs have been fitted to the rear axle.

There are 3 modes of charging the 3 x 110 amp AGM batteries. Firstly by the solar panels via a Victron solar charge controller with bluetooth which you see the amount of charge you get from the panels. It can charge through the Battery to Battery 30 amp Sterling Charger which charges as your driving. Lastly there’s a 30amp battery charger which gives you the ability to connect up to 240v at home or on a campsite. There’s also a Victron battery monitor which lets you see the amount of charge you have in the batteries. Under the bed there is also a 2000watt pure sine wave inverter so you can charge your laptop or use a coffee maker by plugging into the 3 pin plugs that are connected to the inverter, Also there are 3 pin plugs that are connected via a mains charging cable.

The water and space within the van are heated with a Truma 6kw gas/electric heater. These are very efficient and warm up the van quickly. The water pump is also under the bed. It also has some space for storage under the bed.

The van has a wifi system with Huawei mifi and works well.

The shower room has a new mixer tap shower as well as a new Thetford cassette toilet.

In the kitchen all storage space is made up of drawers. There’s a Thetford 3 burner cooker with oven (unused). The new sink has a mixer tap and a second tap which is fed from a small tank under the sink and is filled with bottled water for drinking.

The driver’s and passenger seats have been replaced with leather captain style seats which have arm rests and both swivel.

There’s ample storage in the form of wall cupboards and the van’s lighting system is comprehensive with task lighting and ambient (strip and spot) lights.

Security in the van includes the Peugeot alarm system. I have fitted all doors with separate “Locks for Vans” locks. Also I have the German manufactured system which allows you to secure the doors with a chain fixed to the seat belt anchor. Designed to stop intruders entering the van while you sleep.

The van has an electric step. There are 6 USB Plugs fitted in the van. 4 above the bed and 2 in the seating area.

There is no fridge in the van. A new one was purchased and fitted. It was a top opening Dometic which failed to work on 12v (fault on the fridge) and was returned to the supplier. It can be fitted under the seat by the table or can be fitted under the bed on drawer runners. We used both systems. I have probably failed to give all the details of the changes to the van some can be seen in the photos. If you need further information please contact me and I can send more photos and information. We had 2 weekends away in the van. Genuine reason for sale. I do not believe you could add more features to this van and the price does not take into account the labour costs. I will get the camper van a new MOT for the new owner.