BEST BATTERY FOR SAVING YOUR MARRIAGE?

​
I’m an abuser of batteries, I’m high on use and poor on maintenance. For the sake of my marriage, I recently had to change the failing batteries in our van. So why was a marriage at risk? Well, If I’ve learned one thing in thirty-plus years of motorhoming; it’s that for an easy, happy life, I have to ensure my wife can dry her hair. If the hairdryer does not work; my life is not worth living. So what marriage-saving batteries did I fit?
Before I tell you what batteries I chose, I thought I’d give you the lowdown on the batteries out there that I might have had fitted.

The lead-acid batteries that power most of our motorhomes have changed little at all since they were invented in 1859. They are heavy, slow to charge and they can’t give you all the power they hold or they will become damaged. They release gases (hydrogen and oxygen) during charging, and therefore most require venting to the outside of your van. But that is the extent of their limitations. Compared to other batteries they’re cheap and if well looked after they will do a magnificent job providing your van with power for many years.

My experiences with Flooded lead Acid have mostly been very good. On one van, I had 7 of them. All heavy 110Ah batteries, but it was a big van. Apart from needing almost a full week to charge them up, they were fine and lasted many years. Seven batteries, though are very heavy, around 150kg and would steal the best part of the payload of many modern motorhomes!

GEL
A Gel battery is a lead-acid battery as above, but they mix the electrolyte with a silica to form a gel. This means the battery can’t spill and so less likely to leak and, good for me, requires less maintenance.

It’s not all good though, they are slow chargers and are fussy about the charge current. Your charger needs to be compatible with gel batteries, overcharge it, and it will fail. Though these days it is rare to find a charger that does not have a gel setting.

My experiences over the years with Gel have been good, I once fitted them in a Hymer where they lived under the front seats. Anyone who has had this configuration knows what a bind it can be to get to them for maintenance. So for me, the maintenance free aspect paid dividends. They did not last as long as regular lead-acid batteries used to, but then am a heavy user and maybe they are more sensitive to poor parenting. Maybe I took them too low, too often.

AGM batteries are completely sealed and while some gas might escape when charging; they do not need venting. It contains the electrolyte (absorbed) in fibreglass mats. No maintenance is required, so these are also ideal for hard to get at battery lockers, or under seat systems.

In theory, these should be the perfect battery for the motorhome, great discharge capabilities quicker to charge, etc. But I killed a set of 4 in one year. I don’t know how; I invested in a dedicated AGM charging module, but they just died after a while. Lots of others on the forums report similar results. However plenty report having good and long service from them. I would never buy them again.

The Enhanced Flooded Battery is a relative newcomer to the battery scene. It would appear that a lot of the big car makers have stopped using AGM and are using EFB in its place. Especially on vehicles that stop-start at lights and junctions. It’s reported that they are fast chargers. As prices drop, these are creeping into the habitation side of motorhomes with some excellent reports.

You probably already guessed that I chose Lithium.

Despite its eye watering costs; this new type of battery offers high performance, low weight and efficient charging. They can operate well at both low (not freezing) and high temperatures and can be mounted any way up. These batteries use Lithium iron phosphate (LiFePO4), which is safe and maintenance free.
People were initially wary of lithium, often because of stories they have heard. Aren’t they the batteries that can catch fire or blow up? LiFePO4 should not be confused with other types of lithium, they don’t overheat and even if punctured they will not catch fire. They are not hazardous and are inherently stable.
LiFePO4 are yet to stand the test of time, but that has not stopped distributors making lots of claims about them, things like twice the power, or they’ll last you twenty years! Below is a list of things you’ll see on most every battery sales brochure.

Capacity and depth of discharge of Lithium

The capacity of all leisure batteries is rated in Ampere hours (Ah). This is a measure of how much current the battery can deliver over a given time.

It won’t of course, there are lots of reasons and it’s complicated, the amount of draw, over how long, the temperature etc, but the principal thing is this; once you’ve used around half of the amp hours, the battery won’t deliver enough volts to power the dryer. (Not that 12v driers will really dry your hair anyway)

The higher the capacity the more electricity it can store (Amp Hours) In motorhomes we really can’t have enough electricity, so vans with just one battery are rare. The reason we don’t all carry 1000 Amp Hours is that those heavy batteries would steal all our useable payload.

These days my family travel lighter. I’m not so well endowed in the payload department as I was. The weight of many batteries is out of the question and was an important factor in my decision to swap my four 110AH Banner FLA batteries for two 100 AH LiFePo4 batteries from Sterling Power.

Straight away, even though we had roughly the same useable number of Amp Hours, we weighed around 65kg less. I often envisage payload in the shape of cases of wine. And this means I now had an additional capability of carrying at least 4 extra boxes of wine. That is a powerful argument for Lithium.

So is it all good News?

These batteries have a couple of potential issues that motorhomers must know before buying. We’ll talk about those later.
Every now and again you will find someone saying they would never fit lithiums and come up with a few spurious reasons why. However, when you drill down to even the fiercest critic’s argument and ask them the question; if Lithium’s were the same price as regular lead acid, which would they buy? They always choose the Lithium, which proves that the only real negative (pun intended) is the price. While the positives such as useable capacity, the uber-fast rate of charge and low weight are worth the extra cost.

WHAT ARE THE ‘ISSUES’​

There are two. The first is these batteries should not be charged in freezing conditions, the better quality batteries have on-board systems to prevent this happening. The second discussion involves whether we can use them as a simple drop in replacement for your flooded led acid. We’ll discuss that in another article.
Reactions: rls106
About author 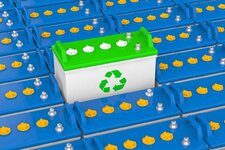 Batteries
CAN YOU JUST SWAP YOUR LEAD ACID BATTERY FOR LITHIUM?